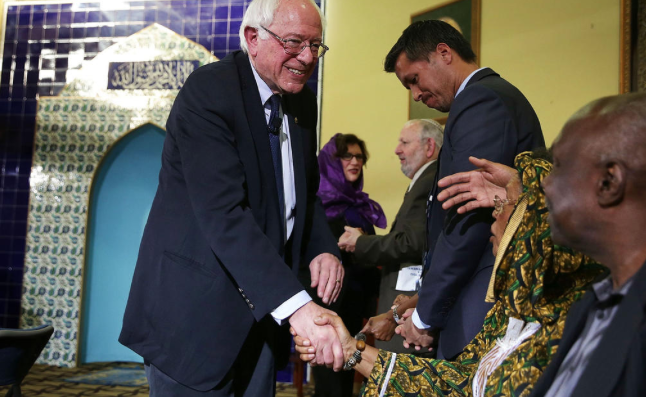 When the Islamic Society of North America (ISNA) held its annual convention, only one of the presidential candidates who is campaigning in Iowa attended the event alongside an unindicted World Trade Center bombing co-conspirator and supporter of killing gay people.

Bernie’s appearance at ISNA’s presidential forum was moderated by an Islamist who had described Hezbollah’s terrorism against Israel as “legitimate resistance”.

This wasn’t unusual. Bernie’s campaign manager, Faiz Shakir, had been a member of an Islamist organization in college where he had been accused of helping raise money for a Hamas front group.

And CAIR’s presidential poll demonstrates that Bernie’s Islamist outreach is paying off.

CAIR’s poll of Muslim voters claims that 39% support Bernie Sanders, while only 27% back Joe Biden.

In Iowa, 5 mosques hosted caucuses as “satellite sites” meant as “safe spaces” for Muslims. Muslims in Iowa don’t need a safe space. No one is going to be assaulting them at Democrat caucuses. But holding these satellite caucuses in mosques gives Islamic organizations spaces under their control.

Iowa Democrats had decided to aggressively erode the boundaries of mosque and state and the caucuses went forward with voters having to remove their shoes if they wanted to caucus.

Of the ten satellite caucus facilities in Des Moines, only one is a church and four are mosques.

The first site of the Iowa satellite caucus was the Muslim Community Organization, also known as Masjid An-Noor, where there was widespread support for Bernie Sanders.

These were the kinds of tribal results you tend to see in elections in Iraq or Afghanistan. Now in Iowa.

“When the Prophet built his mosque, he didn’t build it just for salah,” Imam Hamed told Middle East Eye, an Islamist site linked to the Muslim Brotherhood. “The mosque is a place for everything that concerns Muslims.”

And Mohammed’s theocratic elimination of the separation of mosque and state is in play in Iowa.

Abshir Omar, a Somali refugee and former CAIR-Iowa director, hired by Bernie Sanders as his Iowa political coordinator, described this as his mosque. Counterterrorism expert John Guandolo has said that Omar told him that Islam calls for the murder of gay people.

At the second mosque, the Al Najah Islamic Center, a majority came out for Bernie Sanders.

The actual caucus address is for the Tawba Islamic Center. This appears to be a largely Somali mosque. Pictures from the actual caucus show Bernie signs on the wall and a non-Somali Muslim crowd.

There is no explanation given for the discrepancy.

But it’s a pattern with the Muslim satellite caucus sites having either the wrong names or the wrong addresses listed, either in error or deliberately. Mosques are routinely listed as cultural centers. This raises questions about the credibility of the Iowa caucuses which the botched results only reinforce.

The name of the Islamic location is wrongly listed as “Zen Zen”. Islamic organizations are not very “Zen”. Despite its name, it is a mosque built by Muslim refugees.

The Islamic and Education Center Ezan was the fourth mosque. This is another Bosnian mosque decorated with the declaration, “There is no God but Allah and Muhammad is His prophet”.

Not exactly the cradle of democracy.

While the Ezan mosque initially split between Bernie and Biden, Biden eventually won 6 delegates to 3 of Bernie’s because of his support for the Muslim side in the conflict in the former Yugoslavia.

The fifth was the Islamic and Cultural Center Bosniak in Granger. This is the megamosque built by the Center in Des Moines over in Granger because its Muslim attendees were too crowded in Des Moines. An imam from the mosque had previously been arrested for sexually assaulting a mother and daughter.

This caucus appears to have been won by Biden.

The satellite mosque caucus locations provide Islamists in Iowa with disproportionate influence. And that influence was used to benefit Bernie Sanders who has emerged as the Islamist candidate.

While Biden tended to perform better in the Bosnian mosques, Sanders was the Islamist winner.

This is not a wholly new development.

Bernie had also pandered to Islamist groups in 2016 and won 60% of the vote in Dearbornistan. The Arab American News had claimed that “Arab Americans voted 2 to 1 for Sanders in almost every east Dearborn precinct.” But in the 2020 race, he has effectively outsourced his campaign to Islamists.

Beyond Shakir, Bernie is campaigning with Rep. Ilhan Omar and Rep. Rashida Tlaib, two ugly names noted for their bigotry and support for terrorism, who came out to Iowa to campaign and hate.

Amer Zahr, a “Palestinian” Sanders surrogate, has ranted about a “Jewish Jihad”, and endorsed BDS.

The list of Bernie’s Islamist surrogates tops out with Linda Sarsour, a Farrakhan admirer and former disgraced Women’s March leader, who had defended the Nation of Islam hate group, claimed that Israel is built on Jewish supremacy, has supported terrorists, including a woman who helped murder two Jewish college students, and supports BDS.

Sanders had also received the endorsement of Rep. Ako Abdul-Samad, the only Muslim elected official in the Iowa House. Samad had chaired the American Muslim Alliance. The AMA has a history of co-sponsoring anti-Semitic events, including one which called Jews “pigs and monkeys” and another which had cheered the murder of Jews.

In Iowa, pandering to Islamists appears to have paid off. While Muslims only make up a small percentage of Iowa’s population, the caucus system can allow small groups to exercise a disproportionate impact if they are willing to get involved. And in Iowa, mosques not only got involved, but were able to host 5 satellite caucuses. That’s not enough to shift the balance. But enough to have an impact. And that is what is truly worrisome. While the Democrats worried about Russian hackers, the real hacking in Iowa caucuses was being carried out by Islamists who were operating on the inside.

“The mosque should be involved because even during the prophet’s time, all the decisions were made in the mosque,” a mosque worshiper commented at a caucus that went almost entirely for Bernie Sanders.

Should the Iowa caucuses really be decided in a mosque?

Today's Magazine Stand: It Ain't What It Used To Be (or Should Be)