The Democrat presidential primaries have been a long politically correct apology tour. 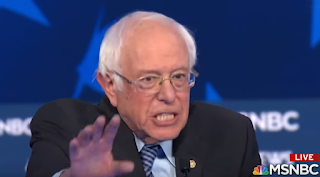 Joe Biden was forced to apologize for opposing crime and busing. Bernie Sanders had to offer up
mea culpas for ever being on good terms with the NRA and for questioning open borders, Kamala Harris had to apologize for enforcing whatever passes for the law in California, as did Amy Klobuchar, who also had to apologize for having once supported border fencing and English as the country’s national language.

After jumping into the race, Michael Bloomberg launched his own apology tour for trying to stop gang violence with ‘stop and frisk’, for criticizing Obamacare, and the easy loans that wrecked the economy.

No candidate, no matter how lefty, is ever truly pure enough for the party of the perpetually woke. Any politician old enough to run for the White House also has a history of believing in things like borders, language, biology, math, law and order, free speech, and any other realities that offend the Wokeratti.

Only a candidate who has done nothing except chastely spout radical nonsense can pass the purity test.

That’s why Bernie Sanders, a hack from a minor state who, until being excavated by some Obama campaign people who hadn’t gotten a gig with the Clinton campaign, was an obscure nobody who had done nothing except rename post offices, is leading the Democrat death march to political oblivion.

There may be 48 years worth of difference between Rep. Alexandria Ocasio Cortez and Senator Bernie Sanders, but they both have the same amount of experience getting anything done in Washington D.C. The only thing they’ve ever done in his long and her short career is lay out imaginary visions of socialist utopias without having the life skills to change a flat tire, catch a bus, or make their own breakfast.

The Democrats have become a party divided between the moderates, obsessed with destroying Trump, and the socialists, obsessed with destroying the Democrats. The emerging representative of the former is Bloomberg: a billionaire willing to blow through 1.5% of his net worth to stop President Trump. And Bernie represents the vanguard of the oppressed proletariat of Burlington, San Francisco, and Aspen, who are slightly to the right of Castro, but, like their leader, have no clue how to get anything done.

The average Democrat outside the DNC doesn’t understand this distinction. That’s why Bernie is leading.

In the party’s current electability obsession, any candidate who does well is electable and can beat Trump. That includes Bernie Sanders, a talking horse, and Amy Klobuchar. Biden maintained the lead for so long because he seemed electable. Details like what he actually believed and whether he was playing with a full deck were deemed irrelevant. Those same details also don’t matter when it comes to Bernie.

But that just meant that the Democrats outsourced policy to the radical fringe that cares about issues.

These are not winning issues.

Most Democrats claim they want electable candidates, but they’re going into 2020 with unelectable policy proposals hanging around their necks that will alienate the average voters they need to win.

House Democrats could have changed that, instead they were sucked into the impeachment black hole. And no matter how much Speaker Pelosi resisted, the one part of elected government that the Democrats control is best known for an obsession with Trump and a disinterest in everything else.

Hating Trump isn’t a winning strategy. The post-impeachment polls showed that all too clearly.

But it’s either that or nationalizing health care, confiscating guns, banning churches and letting terrorists vote from prison. And those are even worse platforms to run on than Trump Derangement Syndrome.

The Democrats are now on track to have a nominee who once said, “I don’t mind people coming up and calling me a communist” because they didn’t care about anything else except destroying Trump.

And, instead, they’re destroying themselves.

The Democrats have locked their party into only one possible strategy and that’s turning out as much of their base as possible. But turnout signals from the primaries have been mixed and large-scale national events like the Impeachment Eve rallies and the Women’s March fizzled badly with few attendees.

The white suburbanites whose cultural hostility fueled the “resistance” appear to be fading. Despite their hatred of Trump, they’re wary of socialism. And a Sanders win would depress their turnout. But a win by anyone except Sanders will depress turnout by his base of Marxist profs and unemployed vloggers. None of the leading candidates summon much enthusiasm from black voters.

Massive turnout requires a united party. And that was a lot easier when they were uniting against something.

2018 saw great turnout because the Democrats rallied around their common front of hating Trump. But uniting against Trump is very different than uniting behind Bernie, Bloomberg, or any other candidate.

Hatred is a powerful force. But it’s no substitute for leadership.

Republican primaries have seen massive turnout because of support for President Trump. A united party is set to face off against a divided party. And that is very bad news for the subdivided Democrats.

Any political movement that depends on division is inherently fractured. The deeper the divisions become; the harder Democrats hate their common enemy. But underneath that common hatred are a thousand festering hatreds, rivalries and resentments, waiting to break out into internecine warfare.

The Democrats are now at risk of winding up with a brokered conviction because hate divided them.

In the Trump Derangement Syndrome era, the Democrats no longer really stand for anything and are willing to fall for anything, from radical ideologies to billionaires and socialists buying the nomination.

Hatred has hollowed out the Democrats leaving behind nothing but a great empty void.

The primaries are the dark night of the Democrat soul. The party’s soul has fed on poisonous hatred. Morning has come to America. But morning may never come to the Democrats divided in darkness.

Ex-FBI Agent: Impeachment is a Tool of the Communist Movement