On a bloody Sabbath in 1929, a Muslim mob massacred the Jewish community of Hebron.

The mob used knives, axes, and stones to kill men, women, and children. Many of the women were raped before being murdered. The Islamist atrocities committed against them defy comprehension. 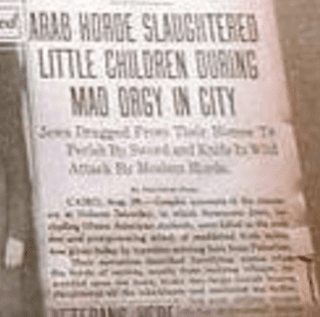 Pierre van Paassen, the Canadian journalist, described seeing, “severed sexual organs and the cut-off women’s breasts”. A more recent summary notes, “Photographs from the time show a girl struck on the head by a sword with her brain spilling out, a woman with bandaged hands, people with their eyes gouged out, a man whose hand had been savagely amputated, and other grisly sights.”

Who, outside the perpetrators, could endorse and support such crimes? The Communist Party.

The Morgen Freiheit, the Communist Party’s Yiddish newspaper in New York, headlined its article, “The Arab Uprising is Spreading – Zionist Fascists Have Provoked the Arab Uprising.”

“It is not innocent blood,” the Communist paper insisted, of the murdered religious students, and
families, “It is the blood of people who went to war against another people on alien land.”

A resolution praised the massacre of Jews as a “revolutionary uprising of the Arab masses in Palestine.”

The Freiheit even held a rally in support of the mass murder, rapes and mutilations by its Muslim allies.

Jewish communities in New York and Chicago reacted by burning copies of the Communist rag, and setting fire to the newsstands that sold it. Many Jewish newspaper sellers announced a boycott of the Freiheit. No one would advertise in the paper and buying it became a badge of shame. Anyone with the least bit of decency resigned. The remaining staff were expelled, reviled, and even beaten in the streets.

Like other Communist papers, the Morgen Freiheit endorsed the Hitler-Stalin pact. In response, Jewish workers assaulted Communists who tried to defend their alliance with the Nazis, calling them, “Communazis”, and taunting them with chants of, “Heil Hitler.” Even Freiheit staffers who had defended the massacre of Jews in Hebron began to drop out of the Communist paper.

80 years after the Hitler-Stalin pact, Bernie Sanders wrote an editorial, “How to Fight Antisemitism” for the Freiheit’s latest incarnation, Jewish Currents. The magazine had not run in Yiddish for a long time. And, officially, it was no longer Communist. Instead, you could see articles like, “In Defense of Marxism”, “Raya Dunayevskaya and Marxist Humanism”, and “Why I’m (Still) a Marxist”. It was perfect for Bernie.

Like his Stalinist predecessors, Bernie stuck to the party line, and pretended that there was no such thing as leftist or Islamist anti-Semitism. He didn’t mention his position on the Hitler-Stalin pact.

The former Communist magazine had gotten a major relaunch last year under Jacob Plitman, a former deputy director of the anti-Israel group J Street U, to try and appeal to millennials who hate Israel. That meant fewer historical pieces about old Communists and Marxists, and more current hatred of Israel.

The reboot was funded by the Puffin Foundation run by the Rosensteins who also work with The Nation.

Now Jewish Currents is going back to its roots by bringing in Peter Beinart, who had called the murder of Jews by Islamic terrorists, “violent resistance”.

Terrorism, he had argued, was a “response to Israel’s denial of basic Palestinian rights.” And he suggested that, “the Israeli government is reaping what it has sowed.” 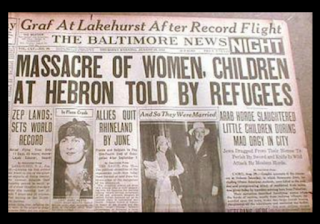 Beinart is certainly reaping what he sowed as his career tumbles down into the media sewer.

In 2012, Beinart had partnered with the Daily Beast to launch Open Zion, an anti-Israel blog. It closed a year later after failing to find an audience for its hate. Beinart moved on to Haaretz, a red rag whose racist publisher urged “international pressure” to end, “Israeli apartheid”, whose world news editor boasted that he is an anti-Zionist, and whose former editor had urged Secretary of State Condoleezza Rice to “rape” Israel. “It had always been my wet dream to see this happen,” the leftist told her.

Is there anywhere lower Beinart could go?

After Haaretz, he appeared at The Forward, the Morgen Freitheit’s old rival, which runs headlines like, “3 Jewish Moguls Among Eight Who Own as Much as Half the Human Race” and “Why We Should Applaud The Politician Who Said Jews Control The Weather.”

There, he accused Holocaust survivor Elie Wiesel of being “blind to the harm Jews cause.”

Last year, The Forward dumped its editor and cut 40% of its staff. Instead of taking the advice of Haman’s wife, Beinart doubled down and joined its old even more anti-Semitic Commie rival.

“I think a tremendous need for a kind of American progressive Jewish publication,” Beinart babbled, explaining that he wanted to “confront what I see as the kind of moral corruption of the American Jewish establishment and its complicity in various ways with some of the things that Trump is doing and the direction that Netanyahu is taking Israel.”

The only moral corruption is 91 years of Communists, Marxists, and Lefties justifying the murder of Jews.

The Hebron massacre had been urged on by the Mufti of Jerusalem, Haj Amin al-Husseini, later popularly known as Hitler’s Mufti for his meetings with the Nazi leader and alliance with the Third Reich. The Mufti, an ally of the Muslim Brotherhood in Egypt, paved the way for the Muslim Brotherhood’s arms in Israel, which include Hamas.

Beinart spent the last decade promoting ties to Hamas. In 2009, he had hailed, “Hamas” as “U.S. Diplomacy’s Final Frontier”. In 2011, he had insisted, “A shift in US and Israeli policy towards Hamas is long overdue.” Last year, he compared Israel’s blockade of Hamas to Hiroshima and the Soviet gulags.

There is a sense of history coming full circle as Jewish Currents, the magazine twice renamed and spun off from the Morgen Freiheit, returns to its folly, as King Solomon wrote, a dog returns to its vomit.

The Morgen Freiheit had been the Communist rival to The Forward, a socialist paper, but one that nonetheless opposed the Islamist massacres of Jews in 1929 and the Hitler-Stalin pact. In those days, any leftist with a shred of conscience or decency had left the Freiheit and the Communist Party for more moderate publications and organizations. Some even became patriots and conservatives.

Beinart has traveled the opposite road. Back in his New Republic days, he wrote after September 11, “The left has proved remarkably creative over the years at blaming virtually any Middle Eastern malfeasance…on the Jewish State.” Then he became the hack he was describing to advance his career. 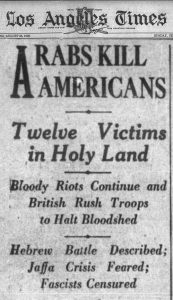 After decades of blaming everything on the Jewish State, the Crisis of Beinartism has arrived.

What’s next for the leading anti-Israel pundit in America? Al Jazeera? Jacobin? Pravda?

And yet Beinart isn’t entirely wrong about a moral crisis in the Jewish community. When the Communist newspaper that was his current platform’s predecessor defended the Islamic murder of Jews, it was boycotted, its leading figures were driven out of Jewish organizations, and its offices were besieged.

91 years later, Beinart knows that he’ll be invited to speak at conferences, organizations, and events. Nearly a century ago, Jewish workers who were just scraping by put their few pennies on the line to take a stand against the Freiheit. Now, Jewish Currents will be circulated by the Jewish establishment groups.

After the Hitler-Stalin pact, Peretz Markish, a leftist Jewish poet in the Soviet Union, met up with an old friend of his. The latter showed Peretz an editorial written by Moyshe Nadir, once a leading figure in the Morgen Freiheit, who had declared that he was leaving the Communist paper after the Hitler-Stalin Pact.

“Moyshe Nadir has revealed that he raised a snake around his neck,” Markish replied. “Only he nourished this snake around his neck? Only he alone? And maybe all of us weaned the snake? And a time may come when this full-grown snake will choke all of us…. Yes, if it keeps going like it’s been going, the time will come that the snake wrapped around our necks will choke us.”

A few years later, he joined the Communist Party. Four years later, he received the Stalin Prize. A decade after that original conversation, he was arrested and charged with being a Jewish nationalist.

Two decades later, Esther Markish, his widow, wrote a courageous open letter, imploring for international pressure on the Soviet Union to allow her to leave for Israel, “Help us, our writers, the conscience of our people, help us to return to the soil of our holy homeland.”

There are two sides. The side of the snake, of Beinart, of the Morgen Freiheit and Jewish Currents, and the side of those who will be choked by the snake, in Hebron, Moscow, or New York City.

When we pay dues to an organization or a synagogue that invites Beinart, when we subscribe to a magazine that publishes him, then we, like that long-dead poet, are feeding the snake.

Once upon a time, Jews were outraged when the murder of their people was excused and defended. Today they continue attending synagogues, paying dues, and funding the establishment that invites the defenders of their murderers to appear on panels, speak at podiums, and sell their books.

That is the true moral corruption of the American Jewish establishment. And it is unforgivable.