The coronavirus scare sure is gripping the entire world with its waves of uncertainty. Millions have been quarantined in China and little news has come officially out of the Chinese land regarding the exact source and nature of n-Cov. The Wuhan coronavirus or the novel coronavirus (n-Cov) is peculiar for the strain is unlike the pre-existing variants like SARS or MERS. People may be driven to think of n-Cov as deadlier than SARS due to the observed escalation in the number of reported cases.

However, experts believe that the new variant, which resembles SARS by 80%, is weaker by a minor degree. When a virus as fatal as n-Cov is spreading, one might naturally wonder why actions haven’t been taken to control its early stages. The death toll in China has crossed 170 and more than 1000 people have been tested positive for coronavirus. Since there is no cure of any kind for this strain of the virus considering its constantly mutating nature, the only medical care that can be administered at the moment is for the tackling of symptoms.  This situation, quite evidently, stands to test how robust each country’s response and medical systems are.

Thursday, January 30, 2020, “The World Health Organization declared the outbreak sparked by a new virus in China that has been exported to more than a dozen countries as a global emergency 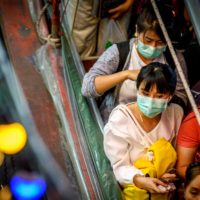 after the number of cases spiked tenfold in a week. The U.N. health agency defines an international emergency as an “extraordinary event” that constitutes a risk to other countries and requires a coordinated international response”.

China has reported more than 7,800 cases and eighteen other countries have since reported cases, as scientists race to understand how exactly the virus is spreading and how severe it is. Experts say there is significant evidence the virus is transmitting among people in China and have noted with concern several instances in other countries — including Japan, Germany, Canada, and Vietnam — where there have also been isolated cases of human-to-human spread.

All major medical organizations had commented on how a vast disease of this kind was only bound to happen with the world stepping into a new decade. Predictions such as these were valid and available to all sorts of consultations, yet we may deduce that not much attention was given to these warnings. In a country that claims to be highly equipped, it comes off as a bigger surprise that the virus cannot be, until this point, thought as contained. China, moreover, refuses to ease the process of sending foreign individuals back to their countries. Reasons for this remain to be unknown and an action of this like is sure to strain diplomatic cooperation amidst these trying times.

WHO (World Health Organization) has still not declared a global medical emergency in the context of n-Cov despite new cases being discovered in a large number of countries across the globe, until today. Up to this point, it was perhaps the absence of such a declaration that has kept the American administration from barring all travel between the two countries, now it is a matter of time. Experts continue to stress that there isn’t much to worry about when it comes to individuals whose recent travel history is not tied to the Chinese mainland. However, looking at my City, Irvine CA., many of our residents are from China and other neighboring countries and they are seen wearing masks everywhere.

A large number of n-Cov cases have been reported in Wuhan and authorities have stated that the virus possibly originated at a seafood market in the city known to engage in ‘illegal transactions of wild animals’. The sense of terror that the new strain spreads is also because it’s not been previously observed to have affected human beings. With a total lockdown in effect at Wuhan, many, particularly foreigners, are stuck in the city with no public transport. As long as they stay within their rooms, they feel safe. The feeling of being alone in an alien city with a medical situation like this on the roll has created panic for many tourists. Attempts to leave Wuhan without permission can be met with seven years of prison as punishment.

Wuhan’s mayor had earlier accepted the administration’s flaws in fighting the medical emergency. Matters were terribly mismanaged when the outbreak had just begun. The coronavirus outbreak is on the cusp to be declared an international health emergency, this could severely affect the legitimacy of the ruling government in China, considering how their dealing of the situation in its early stages was highly erroneous. The numbers could have been restricted to a controllable quantity, had the officials acted responsibly and on time. It is remembered with much disdain that the initial days of the outbreak were spent by the authorities on arresting those who posted about it.

Journalists and news organizations were threatened if they went on to publish reports on the Chinese coronavirus. One may be reminded of the time when China had tried to cover up the SARS epidemic in the 2000s. The suppression of relevant information to the WORLD pertaining to the outbreak coupled with the lack of action on the side of health officials to reach the root of all the mysteries surrounding n-Cov has indeed made matters worse.

There is much to learn from the way this virus has been medically and administratively managed. The wrongs, unfortunately, cannot be undone, but measures can be taken by all countries and the Chinese authorities to not follow the same path again. Awareness with respect to precautions and personal hygiene must be on the rise at this point. The key to overcoming a deadly disease lies in proper hygiene and better cooperation across all spheres of administration. A constructive approach aimed at getting to the root of the problem may be the answer to dissolving the terror that comes with a new virus-like n-Cov.

According to visitcalifornia.com more than 4 billion tourists in 2019, 45000 airline seats were purchased per week with a 14 day average stay, $2200 per person spent in California.

“Tourism markets will take an outsized hit, as about 163 million Chinese tourists accounted for nearly a third of travel retail sales worldwide. Thailand, for example, has already reduced its 2020 GDP forecast, based on expected revenue losses of as much as $1.6 billion from 2 million fewer Chinese visitors, should travel restrictions continue for a further three months.”

The declaration of a global emergency should bring money and resources, but may also prompt panicked governments restricting travel and trade to the affected countries. The announcement of restrictions on travel have also imposed more disease reporting requirements on countries, especially in China where they delayed reporting of the viral outbreak as this virus spread.  As a precautionary measure many of China’s village and cities are using patrolling drones equipped with speakers to patrol during the #coronavirus outbreak warning people to wear masks or go indoors.

Panic is unavoidable, but better still is a strange optimism that’ll help us overcome a medical emergency such as this. Let concern be alive, yet not too vigorous as to consume and keep us from reaching pragmatic resolutions.

Exactly How Much Is Your Vote Worth?