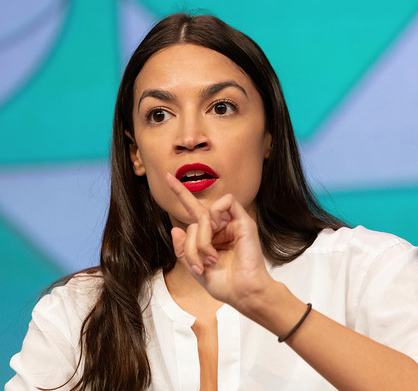 Alexandria Ocasio Cortez is so far to the left, she thinks the rest of the Democrat Party is a “center-conservative party.”  That’s what she told a group commemorating Martin Luther King Jr. Day this month.

Delusional is the only word I can think of to describe her warped thinking.  As of today, the front runner for the Democrat Party’s nomination is a radical, self-described socialist, Bernie Sanders.  Does she consider him center-right?

Even those candidates running behind Bernie are far more left than liberal.  They’ve all supported one form or another of government-run healthcare, punitive tax increases, gun control, abortion right up to the point of birth, and greater government regulation of free markets to the point they could no longer be called free. Would she say they’re center right?

Keep in mind as well that AOC calls herself a socialist, promotes a wholesale government takeover of the U.S. economy, and despite that is a leading member of the Democrat Party.  Surely she doesn’t think of herself as center-right?

It’s also interesting that AOC is the number one fundraiser among Democrat members of Congress.  She raises millions from hundreds of thousands of her fellow Democrats – money she’s using to support other far left socialists in Democrat primaries all over America.  Does she think her donors are center-right

Despite all this, AOC insists Democrats are a center-conservative party and she’s working night and day to change that.   As noted, she’s doing so by funding the campaigns of other leftist socialists.  But it’s not enough for AOC that she be feared for her political muscle, she also wants to be admired for her intellectual heft.

In her bid to be considered the brains of the Democrat Party’s far left, AOC has written a new manifesto that would be more at home in Venezuela or Cuba than in the United States – or any other country that prizes freedom, human dignity, or individual rights.

“The Recognizing Poverty Act” would adjust the federal poverty level to account for regional differences.  In other words, it provides more help to “poor” people in Democrat coastal areas, and far less to the “deplorables” in the more Republican middle of the country.

“The Place to Prosper Act” would prohibit annual rent increases more than 3 percent.  It gives government control over housing, rents, and development.

The Mercy in Re-Entry Act was also accompanied by a pair of tweets from AOC that promoted “prison abolition” and “a real conversation about incarceration [and] prison abolition in this country.”

According to AOC, “A cage is a cage is a cage. And humans don’t belong in them.” Not even rapists, murderers, and human traffickers. As usual, AOC rants against prisons, but offers no alternatives.

“The Uplift Workers Act” in part changes how businesses qualify for public projects from dollar-based considerations to “worker-friendliness.” In other words, the only companies who can receive government contracts are those that are unionized, invested in “approved” industries, and properly diversified.

Come this July, you can bet AOC and the far left of the Democrat Party will be in full force at the Democrat National Convention turning her manifesto into the official Democrat platform.

And it won’t just be her new manifesto. You can be sure her Green New Deal will be part of that platform as well.

She uses words like “justice,” “planning,” strengthening,” and “rebuilding.”  But they’re all words she’s redefined to fit her radical world view.

She says a “just society”

These are just a few examples of her intent to put government in control of our lives and our country, take our freedom, and destroy our economy.

AOC thinks her new manifesto combined with her Green New Deal will make her the intellectual leader of the Democrat Party’s far left. The problem is there is nothing smart about either of her plans. They’re not only an attack on freedom, personal well-being, and human dignity; they’re unworkable, unaffordable, dumb. It would all be so laughable were it not so pathetic.

Daniel Greenfield: How the 'Interpreter' Scam Brought 75,000 Iraqis and Afghans to America