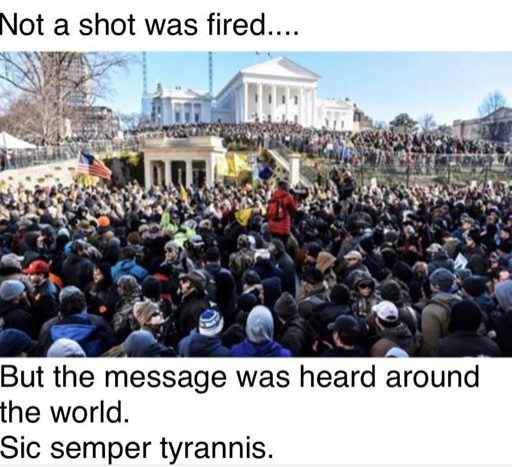 The Second Amendment Rally at the Capital in Virginia is now history.
The infamous Blackface Governor did everything that he could to ensure that it would be a failure.  His plan backfired as supporter’s showed up by the thousands and filled the streets in the Virginia Capital.
The Virginia Blackface Governor no doubt quickly began to blush as he witnessed the crowd size, and no more than likely very soon  began to feel like Governor Redface.
People are tired of government overreach and Progressive policies that seek to infringe upon our Natural and Constitutional Rights. They let that fact be made known on January 20, 2029.
It would seem like the Governor and his staff would have learned their lesson after having seen the response from the Make America Great Rallies that have been jammed packed across the country.
The Red Tide is rising, and time will tell if they got the message of the day.
People are fed up with the attempts to destroy our country by those in political positions.  It would seem like those responsible for attempting to grind America down would see the light and ride the wave.
The Rally in Virginia was quite a sight to see as peaceful rally goers stood up for our Constitution and Bill Of Rights.
Even with the rumors of possible violence, and trouble hanging over their heads if they attended, thousands of people wearing and carrying fire arms, waving flaggs, and singing and chanting pro American songs and slogans, met in one place without the fear of being involved in a firearms incident. Not a single shot was fired, and no violence was reported. Compare that to what happens in Democratic cities Nationwide on a daily basis. It did not happen  because those attending were, and need I remind you are responsible God fearing citizens. They did not gather to destroy, they gathered to show support for making keeping our nation unified and strong.
They did not gather to start a shooting spree, but gathered to show peaceful support for our Founding Principles.
Social media was filled with coverage of the event.  Where was the Main Stream Media coverage?  As usual they failed to cover it because the agenda did not fit the news of the day for them. They were hoping for the worse to take place.
By and large Americans are fed up with the Progressive Socialist agenda, and are displaying their feelings by attending rallies. They will ultimately prove that they care in November at the polls also.
America supports the polices of President Trump because his policies are renewing the American Dream in their hearts. His policies are making the American Dream available once again for all Americans. They see hope in a President that loves his country.
The media, Hollywood, and those responsible in government positions tried to deter good people from doing something positive. It failed, and will continue to fail.
When people that fear  God and love our country have a good cause to support, they will come.
The days of not showing up are over. The American spirit is once again on the rise.
They came, they rallied, and they proved that when it comes to restoring and rebuilding our nation people will come.
It’s is time that the powers that be opened their eyes and see that the Red Tide has come to shore.
FREEDOM And LIBERTY / USE Them Or LOSE Them!” (EM)
Share
Facebook Twitter Pinterest Reddit Share via Email Print

Americans Are Voting With Their Feet (And Moving Vans)