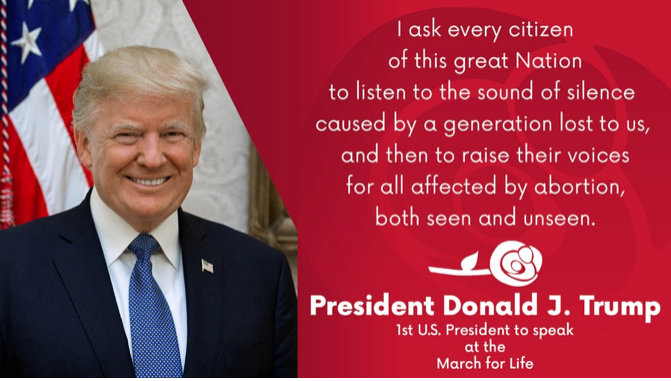 While the Democrats continue their vendetta from the 2016 election against Trump, the President is hardly cowering in The White House in terror. He has better things to do than the Democrats. He is continuing to do what got him elected. He is more in touch with the silent majority than the Democrats will ever be and that’s why he has nothing to fear in the upcoming election.

And now he has taken a bold step to show his support for saving lives.

On Friday January 24, 2020 President Trump became the first sitting U.S. President to attend the annual March for Life rally in Washington, D.C. Other Presidents have opposed abortion but only Trump had the guts to stand side by side the anti-abortion activists. Trump boldly stated “unborn children have never had a stronger defender in the White House.” Beginning with his debates against Clinton in 2016 he has consistently articulated a very strong stance against abortion. Indeed, with his Supreme Court picks, Trump has set the stage for Roe v. Wade to be challenged and hopefully overturned.

Heroes don’t always come from places you expect. Great deeds of good aren’t always performed by people with squeaky-clean pasts. Who would have ever thought that Donald Trump would one day become the most vocal opponent of abortion to thus far sit in The White House? I believe the man is sincere. I also believe he understands that there are many God-fearing people who are appalled by abortion. He took a stance by participating in the March for Life. In doing so he has invited the wrath of those who feel it’s a matter of a woman’s right to choose. Being anti-abortion does not equate to being anti-woman. God gave women an incredibly special place in this world but He most certainly never intended for people to rectify lapses in judgment or unwanted pregnancies through murder.

I could never vote for a Democrat due to their support of abortion. The Democrats portray themselves as the party of social justice but when push comes to shove they don’t defend the rights of the most helpless of all people: unborn children. Assuming it isn’t a case of rape or incest, pregnancies are the result of people’s willful actions. To terminate a life, even if it is still growing in its mother’s womb is murder. How can anyone justify murder as an acceptable avenue to correct a mistake or regret in one’s past behavior? Killing an innocent life, especially one at an advanced stage of development is butchery. I think this nation has two humongous sin debts hanging over its head: slavery and abortion. Slavery was abolished. I pray abortions are abolished as well. Letting the murder continue is just begging for the Wrath of the Lord to come down upon this nation.

But speaking of the Democrat Party…I have paid virtually no attention their efforts to impeach President Trump. It’s all a bunch of nonsense. I don’t even care if he withheld military aid from Ukraine unless they investigated the Bidens. I think there is a strong argument that such a request was reasonable.

Former Vice President Biden’s Ukraine activities should definitelybe investigated.Biden was a representative of the previous administration. His activities in Ukraine shouldbe scrutinized. Blood is always thicker than water. If someone has dealings with another country or entity and their child benefits in a suspicious manner, common sense says something was fishy. Would Joe Biden’s son Hunter have been awarded a high paying Board of Director’s position with a Ukrainian natural gas company if he weren’t the son of the Vice President? If Hunter Biden were an expert on Ukraine or natural gas that would be one thing but he wasn’t and isn’t. As an American citizen I’m supposed to be ok with Hunter Biden earning millions of dollars in Ukraine at a time when his father had significant influence there? Even if by some chance there wasn’t a self-serving deal in place, there is such a thing in business as being ‘independent in appearance.’

Imagine this: Suppose a Chinese corporation named Barron Trump its new CEO earning a multi-million dollar salary? That would be ludicrous because Barron Trump is still a boy. The self-righteous media and Democratic Party would go nuts over that. Why? Because companies and countries do not pay unqualified people large sums of money for no good reason. If Barron were given such a CEO position the logical assumption would be that they are trying to curry favor with President Trump by enriching his son. Personally, I would pick Barron Trump over Hunter Biden any day of the week if I had to pick one of them to be my CEO. Nevertheless, the fact remains that no one is crying foul in the case of the Bidens.

However, in the insane world of today’s politics, it is Trump, not Biden that is portrayed as the bad guy. Instead of being seen as a person exercising due diligence, the President is being portrayed as a person willing to use the authority and power of the Presidency to harm a political opponent. There is just one problem with that: Joe Biden is no challenge for Donald Trump. If Hillary Clinton, whose campaign had a billion dollars in funding and the unabashed support of virtually every mainstream media outlet couldn’t defeat Trump, how exactly is Joe Biden going to accomplish it?

Trump doesn’t appear afraid of anyone to me. Any man with the number of enemies he possesses who is willing to step out onto the football field in front of thousands upon thousands of people at the College Football Championship is quite fearless in my book.

The reality is that Biden doesn’t have any better chance than Clinton against Trump. Why? The reason is obvious. In hindsight, Trump’s win in the 2016 election should have been a foregone conclusion. During the election Trump rallies attracted huge and enthusiastic crowds. The Clinton rallies had few attendees and the spirit of those rallies resembled that of a somber funeral. Clinton and the Democrats failed to inspire people. Trump successfully got his message across and it was a message people were willing and are still willing to hear.

Trump rallies continue to attract large enthusiastic crowds. People identify with his rejection of conventional politics and admire his willingness to go against the grain.

Case in point, the President’s unprecedented appearance at Friday’s March for Life.

Meanwhile, one can only ponder the amounts of money being wasted on this impeachment farce both in terms of dollars and wasted time in which Congress is accomplishing nothing in terms of legislation. Is Trump a saint? Of course not. However, I can back what he does more than any Democrat. Their arguments and cries for “justice” in the dogged pursuit of destroying Trump are only strengthening him in the eyes of his supporters. If the Democrats truly want to rid the government of dishonesty, corruption, and graft, they should start with themselves.

Where’s Perry Mason, Matlock, and The Defenders When We Need Them?