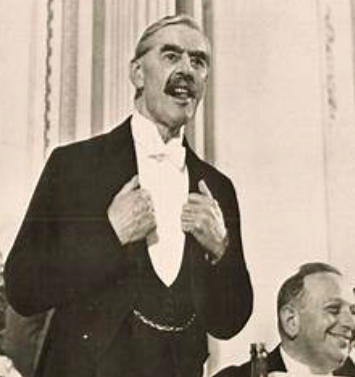 Are you angry enough yet? I am. The Left’s recent fake outrage over the killing of Soleimani was just about enough to ‘almost’ put me over the edge. In trying to protect Obama’s horrible foreign policy, Obama and his acolytes believed that diplomatic conciliation would better serve the interests of the United States.  Has the Democratic Party adopted the appeasement policy of Neville Chamberlain?

For those of you not familiar with Neville Chamberlain, he was the UK prime minister who looked the other way after every escalation by Hitler in the run-up to WWII. For 40 years, the U.S. has essentially appeased Iran. And when Putin took the Crimea and China gained a foothold in the South China Sea, what did we do? Nothing!  We know that the Socialist Democrats do not believe in a serious defense of American interests. I question how many main stream Democrats have been infected by the same ideology?

Speaking of appeasement, I ask, “What was Obama’s foreign policy legacy?” If you think it was the nuclear agreement with Iran, you’d be wrong. That agreement was achieved through appeasement, the release of $150 Billion, and a secret stash-of-cash in the amount of $1.8 Billion. That agreement did very little to delay Iran’s nuclear capability, and Trump properly withdrew in 2018. In addition to the demise of Soleimani, Trump has imposed crippling economic sanctions on Iran. The Iranian economy is on the ropes, and the Iranian population is protesting against the Mullahs. Trump deserves direct credit.

What Donald Trump has achieved in foreign policy is remarkable, and populations of other nations are taking notice.  We now see riots in Taiwan and Hong Kong were people are literally raising the American Flag. When was the last time we saw this? It’s usually some riot from an authoritarian country burning our flag. However, now they are clamoring for freedom and capitalism.

The one fundamental principle that all foreign policy must contain, and yet has been absent, is that when a U.S. President makes a declarative statement, our enemies must believe it, and our allies need to trust us. And if you think our allies need to like us, you’d be wrong; they need to respect us.

When Candidate Trump took on NATO, and stated that most member nations were not doing their share, what happened? In spite of Trump’s aggressive rhetoric, most member nations have bellied-up, and the stipend to NATO has increased by about $75 Billion. That makes for a safer world.

When Trump moved our Embassy to Jerusalem, it was something previous Presidents have favored. But it was Candidate Trump who stated that he would move the Embassy, and move it he did…altering the world that a President’s word stands for something.

International trade is also a component of our foreign policy. Trump is keenly aware that tariffs are losers, and anyone thinking otherwise should say the name, “Smoot-Hawley.”  Yet, what did Trump do? He used tariffs as leverage, and while liberals and the media harshly condemned Trump, I stated, at the time, that Trump is playing the long game. Today we have the USMCA, and in a few days a signed agreement with China for phase I. One cannot ignore that success.

The appeasers in the Democrat Party show their hatred of Trump by revealing and embracing a foreign policy of conciliation. Sometimes I wonder, are these people Americans? Seems like Chamberlain-style appeasement to me.

Daniel Greenfield: The Russians Used the Media to Influence An Election for the Left