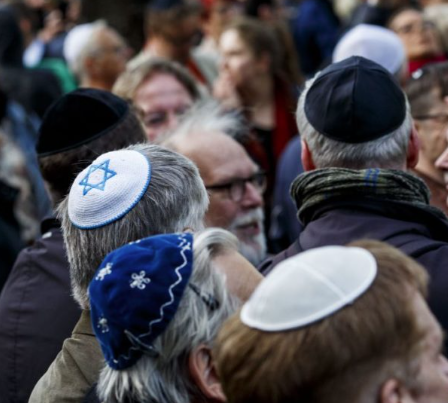 The end of the year is usually a busy and meaningful time of year around the world for Christians and Jews. There is that delicate balance that we all try to navigate between the secular and the true meaning of the holidays we celebrate. Is that what they mean by “the magic of the season”? Possibly.

The final weeks of 2019 however, were met not with magic, but with evil. Both Christians and Jews were viciously attacked for their beliefs. For Christians, it might be a relatively new challenge, but for the world’s Jewish communities, sadly, it is business as usual. That was brought home to all in light of the recent attack in New York at the home of a Rabbi during a Hanukkah celebration. This was a particularly heinous crime, as the suspect entered the home armed with a machete and stabbed five people, one of the victims may have permanent brain damage, that is if he regains consciousness.

Attacks on Jews not just in the U.S. but worldwide are on the rise. In the United States, according to the Anti-Defamation League, there were 1,879 anti-Semitic incidents in 2018. This is the third highest number of events in one year since the ADL began tracking such incidents in the 70’s. Internationally, according to an April 2018 article in the UK Guardian, the number of incidents of violence were down, but there was a significant rise in harassment and abuse. This is no doubt attributable to social media.

What is not talked about in the mainstream media, besides the fact that it is not right-wing white supremacists carrying out these attacks, is the fact that there is a very clear connection between young people, perhaps the greatest purveyors of social media, and the dangerous, let’s call it what it is, lack of education in world history.

The statistics are hard to believe. A 2018 survey done by The Conference on Jewish Claims Against Germany found:

61 percent of Americans do not know Adolf Hitler was democratically elected.

Many of these attacks are taking place in New York City, but very few are being prosecuted. Why would that be? Isn’t a hate crime a hate crime no matter who is targeted? The answer is no, at least not in New York. In a November 2019 article in the New York Post, 71 percent of the suspects arrested for hate crimes in the most recent slate of statistics available were people of color. Would not the next logical question be, where are the Al Sharptons and the Jesse Jacksons of the world immediately coming out to condemn hate and discrimination in any form? After all, they are Pastors, men of the cloth, right?

The answer is sadly, they will not. It does not fit the narrative that they and their cohorts in the media have laid out. That is, that there is only one set of victims, and it isn’t Jews.

If you think this is just an east coast problem, think again. Ari Hoffman was a board member of a Seattle area Jewish cemetery. In April 2017, he received a call from the groundskeeper of the cemetery. He said there were people camping out in the cemetery, drinking, using drugs and leaving behind needles, and human waste. The groundskeeper was even assaulted when he tried to confront the trespassers. After numerous attempts to get the City Council, state and local authorities, local Jewish organizations and publications to pay attention and possibly help bring a solution to the problem, everyone passed. At this point, Hoffman began to receive online threats and harassing phone calls.

Deciding to take his frustration in a positive direction, Ari Hoffman decided to run for Seattle City Council. It is a step many Americans take in a desire to make their communities a better place. It did not take long for the Seattle Left, yes that’s right, the Left, to ramp things up.

Wait a minute! Seattle is home for many tolerant, all-inclusive Liberals.

That is a lie.

The laundry list of abuse that Ari Hoffman and his family endured is taken right out of the Leftist playbook, death threats, boycotts of businesses that contributed to his campaign, theft of yard signs. He was not invited to any candidate forums.

When the Seattle Police Department could not locate Hoffman, they left a card at his front door asking him to contact them so they knew he was ok. But perhaps the most disturbing event came in the form of a picture of one of Hoffman’s children posted on an online forum called 8chan, described as “far right”, with a caption that said, “kikelet”. When the American Jewish Committee reached out to the Mayor’s office for a statement of condemnation, none was forthcoming until eight days later when the Mayor’s office issued a private statement to the AJC. No other statements from any elected officials were issued. However, when the yard sign of an African-American Council candidate was defaced with a racial slur, not an elected official or the Mayor was silent.

Let’s face it. The Left and the Media have decided that there are forms of acceptable discrimination. Both groups are populated with people included in the statistics listed above. The Jewish people have been persecuted throughout history like no other group of people. They always endure it with a class and dignity that no other group has done. They are getting tired of doing that. It is a dangerous thing to forget history. When forgotten, or not even taught, it tends to be repeated.