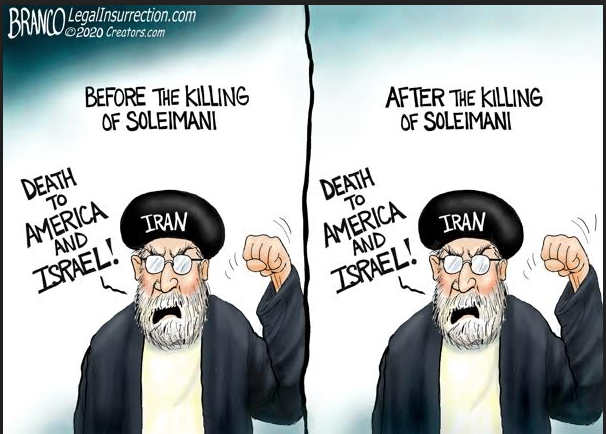 Good grief Murphy, make up your mind.  Or maybe Murphy prefers Obama’s approach … send $150 billion in cash to Iran, the biggest sponsors of terror in the world.

Actress Rose McGowan decided her role in all of this was to apologize to the Iranian people for Trump killing their beloved general. Apparently her bleeding heart ideology blinded her to the thousands of Iranians dancing in the streets of Tehran to celebrate the death of Soleimani.  After all, Soleimani’s victims weren’t just Americans, he also killed hundreds of his own people for doing nothing more than protesting rule by the Mullahs.

No question though that Soleimani’s favorite target was Americans. Obama’s Defense Department identified Soleimani as a terrorist responsible for the deaths of more than 500 American soldiers.  Add to that the thousands of Israeli, Iraqi, Syrian, and various other civilians he’s personally responsible for killing, and he might be one of the biggest mass murderers of the 21st century.

The Washington Post called General Soleimani a revered military leader. Really? Revered by whom?  Certainly, not the families of those whose lives he destroyed.

Ilhan Omar (D-MN), never one to miss blasting Trump, tweeted that Trump was “leading us to war!”  Odd since she knows the U.S. has been fighting a war in Iraq for 15 years, a country where we had every right to target an enemy combatant responsible for American deaths.  That apparently did not matter to Omar who promised she’d step in to stop Trump. One has to wonder who’s side Omar is on.

One far left cable station complained, “right move, wrong leader.” Not sure what that means, but if they’re saying it was the right thing to do, but Trump was the wrong one to do it, you have to ask why? If not Trump, then who? Certainly none of the Democrats running for president.

They’re all in lockstep agreement that killing this most terrible of terrorists was too “provocative.”  Bernie called it “dangerous,” Warren said “reckless,” and Biden likened it to tossing “a stick of dynamite in a tenderbox.”  None of them noted that Soleimani was in Iraq to plan more attacks on Americans.  It’s frightening to imagine any of these people as Commander and Chief.  We’d be right back to Obama’s policies of dismantling our military, apologizing for our standing up for ourselves, and excusing countries that sponsor terrorism like Iran and Russia.

Both Pelosi and Schumer were outraged that Trump didn’t notify them in advance of the attack.  In fact, pretty much the entire liberal choir in Congress wrung their hands over the fact Trump didn’t first coordinate the attack with them.  But given that Congress leaks like a broken pipe, why would he?  Maybe they think it’s only fair the enemy know in advance what’s coming?

To be perfectly clear, Iranian sponsored terrorists attacked the American embassy in Baghdad.  Soleimani was in Baghdad to plan further attacks against Americans. We’ve been fighting terrorists in Iraq for more than 15 years. Why wouldn’t we target Soleimani?

Trump’s attack sent a powerful message to Iran’s leadership. If you continue to wage war against America and our allies, you are not immune from retaliation. Obama’s reign of appeasement is over.  Rather than piles of cash intended to buy you off, expect a swarm of missiles intended to bring you to justice.

In delivering that message Trump absolutely did the right thing.  Despite the left’s whining and hand-wringing, Americans should know that today they’re a little safer thanks to Trump’s swift and sure action.

The Political Misdirections in ABC's 'Truth and Lies: Jeffrey Epstein'