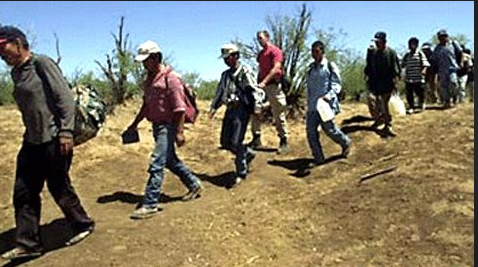 The media is fond of saying the number of illegal immigrants in America is something around 11.1 million. They base that estimate on a Pew Research study from 2016. The problem is that their estimate is only about half right.

Twenty-two million is a lot of anything; dollars, yo-yo’s, cars, gallons, and certainly illegal immigrants.

It equals the population of Virginia, Nevada, Idaho, New York City and Rhode Island combined! You could replace all the people in Florida with illegals it would be more people than the population who live there today.

Because they are here illegally, we know almost nothing about them. There’s been NO vetting; no assessment of the illnesses they may have brought with them; no criminal back ground checks; no interviews to determine their beliefs or values; no understanding why they’ve come or what they intend.

We’re not even sure what they’re costing the American taxpayer; except that we know it’s a lot.  Democrats and the media are fond of claiming illegal immigrants pay more in taxes than they use in services. Really?

For purposes of argument, let’s accept the $30 billion or so figure that most liberal Democrat think tanks and political pundits claim illegals contribute in federal and state taxes.

Educating the children of illegal immigrants alone costs taxpayers about $45 billion a year, and that doesn’t count the diminished returns in education dollars spent from bigger class sizes, wear and tear on school facilities, and the problems associated with teaching students who don’t speak English.

Studies that are now more than a year old tell us taxpayers spend some $30 billion on health care for illegals annually. That number is clearly out-dated given those studies generally use the old Pew estimate of 11.1 million illegals. California alone budgeted $50 billion next year for free medical care for illegal immigrants. Nationally, the cost is probably around $90 billion.

About half of all illegal immigrants who are recent arrivals receive some sort of federal or state assistance. Of those who have been here 10 years or longer, that number jumps to nearly 70% according to some analysts. Again, there’s no way to know for sure.

What we do know is that more than 10% of California’s budget goes to pay for the education, health care, and financial assistance of illegal immigrants. Congrats California taxpayers, more than a buck out of every $10 you pay in taxes goes to people who have no right to your money, except that your politicians say you owe them.

All taxpayers pay for the illegal immigrants in federal prison – more than a fourth of our prison population – 26%! They’re not there because they entered the country illegally either. They’re there for things like murder, rape, human trafficking, and cross-border drug crimes. And that doesn’t count the illegals in state prisons and local jails convicted of gang crimes, home invasion, murder, rape, child abuse, and car jacking.

Democrats call President Trump a racist for wanting a wall on our southern border. But when confronted by the real costs of illegal immigration in crime against our families and the hit against our taxes, most honest observers see a wall as the least we should do. In Yuma, AZ where a good portion of the wall has been built (no thanks to Democrats), illegal crossings are down over 90%. WOW!

I’m not saying illegal immigrants don’t provide benefits to some sectors of our economy, but there’s no question illegals cost more than they provide. Democrats could not care less about that. Because all Democrats care about is how illegal immigration benefits them and their political power. They figure once they’re in control, amnesty and streamlined citizenship will lock in a huge new block of votes that keep Democrats in control permanently.

Though immigration is now taking a back seat to impeachment on the nightly news; when it comes to the future of our nation, almost nothing is quite as important.

Daniel Greenfield: Why a Jewish Democrat Praised Trump for Standing Up to Anti-Semitism