My Christian Faith is the single most important aspect of my life. I was raised in a Christian home by Christian parents and grandparents. As young boys, our Dad read Bible stories to my brother and me. Our Mom, a housewife, always reinforced Christian values whenever my brother and me encountered conflicts between us and/or other children. I come from a small, strongly conservative town. It’s a place where people not only know you, but also your family. It’s neither right nor fair, but the actions of a family member can impact how an entire family is perceived.

Yes, my hometown is a relic of the past; one of the last of a dying breed. It harkens back to an earlier America and a far more simple time…and I couldn’t feel more blessed or more proud to be the product of such a community. It’s a place that holds people accountable and indecent behavior results in embarrassment. There are clear lines between right and wrong. Discipline is valued more than capitulation.

For the first 40 years of my life, I attended a church that was United Methodist. It is the church where I grew in the Christian Faith. It was once occupied by many wise men and women who taught me invaluable lessons in Faith and understanding the Bible properly. I taught Sunday School there for twenty years and felt a sense of fellowship with my fellow parishioners. It was a church once steeped in tradition and the focus was on Christ. Church services there used to mean something. Preachers once talked about the evils of sin and how the devil tempts us and most importantly how Jesus saves us. I can’t imagine any of the wise people I knew throughout the years at that church ever yielding to outside influences or attempt to overturn that which is written in the Bible.

The biggest heartbreak of my life was watching that church gradually move away from God as the elder members of the church began to die off. Those faithful leaders were gradually replaced by younger people with new ideas. The message started to become watered down. The focus moved away from the Salvation offered by Christ and began to focus on a more ‘contemporary’ and secular view that everything is ok and there is no need to worry about sins or following God’s Laws. We eventually had a preacher who declared it wasn’t his job to preach Salvation from the pulpit. It was clear the church had lost its way. I’m sure the same scenarios played out at many United Methodist churches across the country. 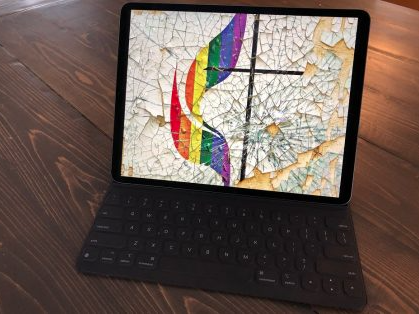 It was a very painful decision, but we left our church because family ultimately realized that the United Methodist denomination would eventually embrace gay ministers and marriages. Those fears finally came to pass this Friday as the denomination announced it would be splitting into two denominations: one that embraces gay clergy and same-sex marriages and a smaller ‘traditional Methodist’ denomination that still opposes it.

In other words the United Methodist denomination is no longer ‘united.’

For those who don’t realize it yet, Friday’s announcement by the United Methodist church is a slap across the face of all churches that still believe the Bible is God’s infallible Word and is thus something not subject to human changes. The United Methodists caved in. They put the satisfaction of the secular world and the hot button topic of ‘universal acceptance’ above Jesus Christ. They have put the religious freedom of every religion that does not accept homosexuality at risk. Undoubtedly the argument going forward will be, ‘The Methodists don’t have a problem with it, why should you?’ As those with socialist agendas press forward, they will be emboldened to attempt to punish religious institutions that refuse to re-write the foundations of their Faith. Sin can’t be redefined. God can’t be contradicted. To do so is a fool’s errand.

Present day America is only too happy to slander and abandon the ideals and principles embraced by our ancestors. This country is foolishly turning its back on Christianity and that is a one-way ticket to disaster. This country has embarked on the wholesale rejection of Christianity and the Christian Faith…something that used to be the cornerstone of American life. How did this country rise to become the most powerful on Earth? Were the pilgrims a bunch of godless communists that landed on Plymouth Rock? Was Jamestown settled by a bunch of atheists who put their faith in socialism as opposed to the Bible?

What would have happened in 1776 if America’s prominent leaders had been Bernie Sanders, Joe Biden, and Nancy Pelosi instead of George Washington, Patrick Henry, and John Hancock? I somehow can’t fathom the British Empire losing to a group of people who preach that absurd social behavior and a sense of entitlement are the way to go. If Bernie had been in charge, Benedict Arnold would never have had any reason to turn traitor.

This country is in store for a reckoning. At the risk of sounding like an old country preacher, I really do believe the wrath of God will descend upon this nation. Forget the national debt, it’s our sin debt as a nation that is the real issue. Slavery was abolished over 150 years ago, but inequality still persists because the Democrats still take advantage of African Americans. President Trump has pointed it out but no one wants to hear it. Since abortion was legalized, this nation has killed millions of unborn children. Now, the agenda is to marginalize religion under the guise of tolerance.

America was built around small conservative Christian towns. They were towns that did not tolerate outlandish behavior. Can you imagine John Adams discussing the legal merits of people using bathrooms based on gender identification as opposed to their actual physical gender? How about Dolly Madison being asked to hang a rainbow flag from the White House to celebrate gay pride month? That sure would have sparked some interesting conversations when the British set fire to it. I somehow doubt King George III would have issued a public apology to the world for the insensitivity of his troops.

By no means am I arguing that all early American historical figures and society as a whole were paragons of virtue. A lot of them weren’t even devout Christians. Nevertheless, American society was not out to eradicate Christianity. No one deemed Christianity a problem or a means to unjustly discriminate against others. However, it’s now become a target. For generations this nation by and large adhered to Psalm 14:1 The fool in his heart says “There is no God.” It has now tragically been replaced by the modern philosophy of: ‘If God gets in the way, shove Him out of the way.’ This of course is a nonsensical philosophy as God is all-powerful and all knowing. Only a fool would try to shove Him out of the way…because He can’t be shoved out of the way. God yields to no one. Of course many people are fools who don’t believe there is a God, thus they see no problem with it. I pity them.

After leaving the United Methodist church, my family found a home and joined a Southern Baptist congregation. We now attend a church where the word of God is preached. I’m sure there are many Christian churches where God’s Word is still preached properly whether they are Southern Baptist or not.

I’m not in favor of mistreating or harming homosexuals, but that doesn’t give me justification to re-write the Bible to suit their needs. It has nothing to do with hate or ill will. All I ask is the freedom to practice my Faith without persecution or outside threats. I pray for those United Methodist congregations who do not agree with nor support Friday’s announcement and I pray for all the religious faiths that refuse to change their beliefs to suit society. May God have Mercy on the collective soul of the United States of America.

Epiphany Day and the Three Wise Men: What’s It All About?