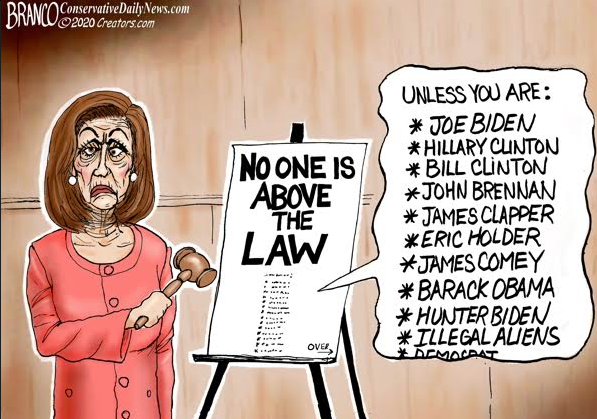 OK America, it is time to stand up for the principles as established by our forefathers. Please pick up your phone for something besides entertainment and start calling your Congressional Representatives and make a simple request:

Tell your Representative it is time to remove Nancy Pelosi from her position as House Speaker. She is guilty of abusing her power to unconstitutionally remove a duly elected President. She has consumed far more from America than she has ever contributed. It is time for this former Mafia Princess, now a dowager in training, to leave the public forum of politics and drift into the obscurity she so richly deserves.  It is time to hold the Speaker accountable for her lies and attempted coup.

Pelosi is financially quite comfortable. For someone paid about $190,000 a year, she is worth millions.  The wealth of many of our political representatives is the best argument the American people have for term limits. The avarice, greed and Constitutional malpractice of Speaker Pelosi is the best argument for her removal as House Speaker. She is incompetent, at best.

Her handling of the Impeachment process against President Trump demonstrates her lack of a true moral fiber and her vast misunderstanding of the Constitutional process regarding the Articles of Impeachment.

High crimes and misdemeanors need to be established as actual points where a written law is broken. Presidents since Washington have been accused of abuse of power. Yet, where is the written criminal statute?  Who has been found guilty of abuse of power in American history? What penalties or imprisonment has any President faced for an abuse of power or for obstructing Congress? No President has been convicted of such a “crime” in my knowledge of history.

Some recent Presidents, such as Barack H. Obama and George W. Bush, possibly should have faced the Articles of Impeachment. They were both guilty, as was President Clinton, of crimes against the Constitution. Both political parties have been corrupt and dysfunctional for decades. President Trump did not win because he ran as a Republican, but because he was not another globalist open borders communist.

After a month of delays, the two paper thin articles of Impeachment were signed by Speaker Pelosi on January 15th. The pens that she used  to sign looked disconcertingly like bullets encased in small coffin-like boxes. It has been reported that the pens cost the American taxpayer $250.00 a pop and were delivered on silver platters that cost $700 each. Yet another example of Speaker Pelosi misusing tax payer money. This was similar to her private tax payer-paid for jet during her first tenure as House Speaker, not to mention the expensive liquor and gourmet treats that she stocked that jet with. Your money, my money. The Speaker lives high on the hog and we foot the bill.

Pelosi’s signing of these farcical Articles of Impeachment is the ultimate coronation of her now historic status as the true mad queen of Congress. Make no mistake, there is an active principle of insanity in the persona of Nancy Pelosi.

For someone that evokes God and the wisdom of our forefathers, she is Constitutionally inept and far from Christian in her behavior.  Her consistently slurred words rarely make any practical sense. It is rare that I have heard one cognitively coherent sentence from Speaker Pelosi.

The past four Speakerships have been filled by three politicians that have a record of delivering nothing positive to help anyone. Their only accomplishments have been to enrich their own coffers.  Considering Speaker Pelosi’s two time history as House Speaker, along with John Boehner and Paul Ryan, it makes me angry. My beloved America deserves far better than this trio of corrupt politicians.

Even in it’s early stages, the Impeachment trial of President Trump has had some interesting moments. On the afternoon of January 22nd, Representative Jerrold Nadler accused the President’s counsel of lying. Really Mr. Nadler?

Nadler, the House Judiciary Chairman, also stated that voting to deny certain witnesses, as many GOP Senators had, was a “treacherous vote” and a vote against the United States. Trump’s defense team responded that Nadler, D-NY, should be embarrassed and should apologize to the President and the American people. Considering how Pelosi and Adam Schiff have tried to control the Senate trial, I have to sympathize with the anger communicated by the President’s counsel.

Yet, the most interesting statement came from Justice Roberts when he admonished both sides. Roberts stated the following:

I think it is appropriate at this point for me to admonish both the House managers and the president’s counsel, in equal terms, to remember that they are addressing the world’s greatest deliberative body.

Robert’s also asked them to “avoid speaking in a manner and using language that is not conducive to civil discourse.”

Now I am not a huge Justice Roberts fan, however this definitely needed to be said. Considering the hijacking of the United States Constitution by the Democrat Party, in this clown world fiasco, it was time for a bit of balance.

When I consider the behavior and statements by Democrats Schiff, Pelosi, Schumer, Waters, AOC  and other individuals, I find them to be a joyless and fundamentally dishonest group of people. The elements of their behavior are both treasonous and poisonous. The facts and the truth do not matter to them. The allegations made by Pelosi, SchiffIt and Nadler are nothing but lies that the Democrats lap dog media continue to validate.

We don’t need to hear from more partisan witnesses that disagree with President Trump’s foreign policy. We have the transcripts of the phone conversations and can see for ourselves that President Trump simply congratulated a newly elected President and they discussed their concern about corruption in government. Both Presidents ran and won on ending the corruption.

It has been over 200 years since the last American Revolution. The behavior of Washington leads me to wish for another grass roots revolt. If things continue to go in the manner that they are, there may not be any other choice.

West Virginia, Regarding Education Your Voice Can (and Should) Be Heard!