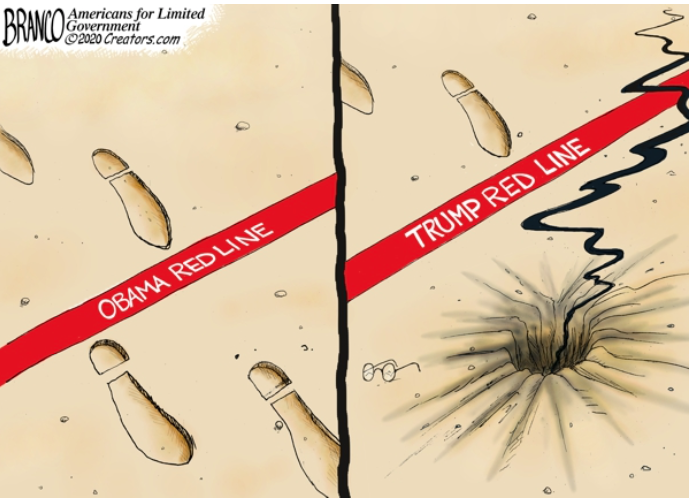 President Trump’s recent responses to Iran bring to mind the old image of the red line drawn in the sand. In essence, that well used image delineates the difference between former President Obama and President Trump. To be exact, President Trump is not a politician.  That is why great things are happening for this country.

Consider this example, Syria was accused of using gas and chemical weapons against it’s citizens.  Obama deemed that to be the red line that would prompt a military response.  There were airstrikes by Obama, rather poorly planned and inconsequential.  Obama drew his line in the sand with a dry red sharpie.

A very good patriot friend of mine, Greg King, did some remarkable research in regards to recent events in Iraq and Iran.  The sections here that are from the period of just before December 27, 2019 through January 3, 2020 are a direct paraphrase of his work.

The United States has been in Iraq to stabilize the country working in conjunction with Iraqi Security Forces to accomplish this goal.  In addition, America and Iraqi forces were eliminating ISIS forces as they left Syria.

On December 27, 2019, an American Contractor, a naturalized Iraqi born  citizen, Nawres Hamid, was killed at the Iraqi service base in Kirkuk, Iraq by an Iranian backed rocket attack.  In addition, U.S. Service and Iraqi personnel were also injured  in that attack.

I knew then that a direct response was going to be forthcoming from President Trump.  He is a not bowing, weak-kneed lily like some of our former presidents.  If you have any doubts about President Trump’s fortitude, ask Baghdadi’s ghost. By his words and previous actions, I believe the real red line for President Trump is the spilling of American blood

Of course, immediately there was an almost side-show response from the global liberal press. They cheapened the life of this American citizen by calling his death, “Trump’s Benghazi.”  Personally, that particular sound bite made me angry.  What has happened in Iraq with President Trump is no where near what happened with President Obama in Benghazi.

Let’s be clear, during the 13 hour Benghazi attack, President Obama sent no aid. Nor did the Obama Administration ever institute any retaliation against Libya for Benghazi. How could they? After all, Barack Obama always had a soft spot for the Muslim Brotherhood. To be exact, al-Qaeda was ruling Libya after September 11, 2012. So Obama now had “friends” to visit and guns to shift to their ultimate destination in Syria.

Additionally, it should be noted, President Obama launched over 2,800 airstrikes on Iran and Syria without any Congressional approval. There was not a peep of protest from Congress or any protest from  the media or the bad actors in Hollywood. Barack Obama gave billions to Iran effectively creating the atmosphere that have lead to the recent attacks in Iraq and other countries. Obama’s American-Islamic Jingoism lead to the formation of ISIS. Those billions also furthered Iran’s nuclear program.

Let us reminisce further, no one  in the 2011 United States Congress ever effectively called Barack Hussein Obama out for instituting illegal regime changes. Changes that were done in partnership with some of our NATO allies.

There were purposeful and illegal regime changes in 2011 that occurred not only in Libya, but also in  Egypt and Tunisia.  Where were the Congressional cries about Obama’s violations of Constitutional process and his violations of the War Powers Act? Congress was mostly mostly silent, except for heroes like then Congressman Frank Wolf, Congressman Jason Chaffetz and Congressman Louie Gohmert, among a select few.

In a stark contrast to Obama’s response to Benghazi, when President Trump found out  that Iran was behind the recent attacking of the American Embassy in Baghdad, he acted appropriately.

It did not take 13 hours for a response. On December 29th, it  took about 13 minutes to put planes in air.  This was a preemptive strike and an appropriate response to the death of an American and an attack on our embassy.

On December 29th targets were bombed in Iraq and Syria. Our air strikes were against Kata’ib Hezbollah’s weapons caches. This Shia militia group had direct ties to Iran’s elite Quds force. This one of the many brand names for tribal conflicts dating back thousands of years. On December 31st, our American Embassy in Baghdad was attacked by Hezbollah and Iranian backed protestors.

On January 3, 2020, America put an end to a monster. Not a dignified military leader, but a monster of evil energy.  He was Qassem Soleimani, the Iranian Commander who was the head of the elite Quds force.  The same Commander who was declared an international terrorist by  President Obama and the same Commander given amnesty by President Obama as part of his Iran nuclear deal. This directly demonstrates, among many examples, the distinct lack of moral integrity in the guise of Barack Hussein Obama.

During the 15 year Iraqi war, 90% of the casualties happened under Obama’s watch. His irresponsible, rules of engagement tied the hands of our armed forces. Definitely one of the most pathetic examples of a Commander-In-Chief in our lifetime.

On January 3, 2020, President Trump called for an airstrike that killed an enemy of America. Soleimani had killed over 600 Americans and grievously maimed countless of American and Iraqi citizens with his professional grade IED’s. Despite the protests of the media and some of the more insipid members of the United States Congress, this monster was killed on the battlefield of his own arrogance. His evil has appropriately ended.

PolitiChicks contributor Kenneth Timmerman has made a convincing argument that Soleimani was involved in the criminal conspiracy that was Benghazi. Timmerman is the author of one of the first great books about the Benghazi attacks, Dark Forces: The Truth About What Happened in Benghazi. Considering the military precision of many of the elements of the Benghazi attack, Soleimani’s involvement in the planning and execution of the Benghazi attack is quite believable. If Soleimani had continued to live, we would have experienced many Benghazi-like attacks.

I am always glad when I don’t have to share the same airspace as an unrepentant terrorist. Yet, unlike the death of Osama bin Laden, there was no celebration in America.

There were recriminations and accusations from the actively ignorant and the morally bankrupt members of Congress, the clown media and the entertainment industry. Make no mistake, Soleimani was not assassinated, he died on the battlefield of his own making.  Congress, the media and the like, only had anger towards President Trump for doing his sworn duty.

The aforementioned poltroons even blamed President Trump for the downing of a Ukrainian Boeing jet on January 8, 2020 by Iran. Are you kidding me? As I have stated before, the ultimate result of hate is insanity. Pelosi, her crew, the liberal press and the Hollyweird are truly insane.

The misuse of power by some members of Congress concerning Iran is an example of missed opportunities. Iran is ripe for a positive revolution. The women of Iran, their children and many of Iran’s citizens are thirsting for freedom.  We should support the freedom seeking Iranian people. I support our President’s fight against the real face of terrorism.

But I refuse to support the active vapidity and sullen stupidity of Nancy Pelosi, Adam Schiff and Chuck Schumer, to name a few. The members of the treason squad of Congress should be jailed. We have started the process to get our country back. It is time to complete the mission. President Trump wants to end our over sixty years of limited warfare and stop the spilling of our brave warriors red blood.  That’s the real red line.