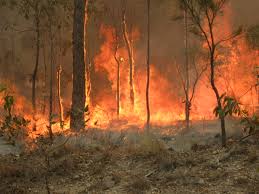 Australia is burning. Over the last few weeks many brush fires have ravaged the country. Many firefighters have been injured or died trying to save people’s homes. But as is typical of many on the left, Michael Mann is using the crisis to promote the climate change alarmism agenda:

The warming of our planet – and the changes in climate associated with it – are due to the fossil fuels we’re burning: oil, whether at midnight or any other hour of the day, natural gas, and the biggest culprit of all, coal. That’s not complicated either.

I wonder how he got to Australia or if he ever uses a car? Surely not!

The continent of Australia is figuratively – and in some sense literally – on fire.

Yes Australia is on fire. And it is the fault of humans. But not because of fossil fuels or natural gas or coal. No, according to Australian law enforcement it is arson:

Australian law enforcement has arrested over 180 people for arson in connection with the nation’s raging bushfires, as alarmists try to pin the blazes on “climate change.”

All of the 183 alleged arsonists have been arrested since the start of this year’s bushfire season, the Australian reported Tuesday, adding that 29 fires were deliberately started in the Shoalhaven region of southeast New South Wales (NSW) in just three months.

I guess they figured out that setting fires is a lot easier than creating elaborate crop circles. (Or…maybe aliens set the fires!).

The extent of the arson is vast, as police have arrested people for lighting bushfires across Queensland, NSW, Victoria, South Australia, and Tasmania in the past few months, police data reveals.

Well now, doesn’t that just destroy Michael Mann’s entire diatribe? Not that it really matters though. The folks who believe in the climate change religion will probably never hear that arson is the culprit. Don’t tell Greta!

And if his name sounds familiar, it is. Michael Mann was the one who created the infamous hockey stick graph which Al Gore used with dramatic effect in his documentary “An inconvenient truth”. The graph shows an incredible spike in temperature with the arrival of modern technology in the 20th century. Problem is, the graph was fraudulent:

The Medieval Warm period — an era between the years of about 1000 and 1300 once generally accepted to have had temperatures warmer than the present — had disappeared. The clear implication was that the earth had had a benign and unchanging climate for about a thousand years, and now humans had entered the picture with their fossil fuels and were rapidly destabilizing the situation

Mann et al. had truncated inconvenient data that failed to match the narrative they wanted to present. Most would call this kind of data truncation a clearcut instance of “scientific fraud.”

I would call it “propaganda”.

The maddening thing about not just this instance but the entire ‘climate change’ agenda is its insidious targeting of today’s youth. Quite frankly people like Mann are scaring the hell out of young people with these lies. You want to talk about deplorable? THIS is deplorable. And these folks are also hypocrites of the highest nature as they rail against fossil fuels etc while jetting around the world and driving their cars. If they TRULY believed what they said their actions would match. Why did Obama buy a house in the Hampton’s if it’s going to be underwater due to climate change in 10 years? This is a movement that at its core is a quest for power, control, money and acclaim. Essentially it is like a cult which preys on the young and innocent.

Now to those adults who buy into all this, please do some research. You will find MANY examples of data being manipulated to obtain the “humans are causing global warming” result they want. Or forecasts of doom and gloom that never happened. I have studied this issue for over 25 years and I can tell you that it is totally false. When was the last time you heard anyone like Mann talk about the sun’s affect on climate. Call me crazy but I think that big ball up in the sky has something to do with it.

The worst scenario for climate change alarmists is a public that is educated on the issue and stops falling for the shrill declarations that we’re all gonna die in 10 years (by which count I should have died about 5 times by now). If we don’t stop falling for it we might as well have signs on our back that say “hoax me”.

The Rise of Anti-Semitism: Has the World Forgotten?