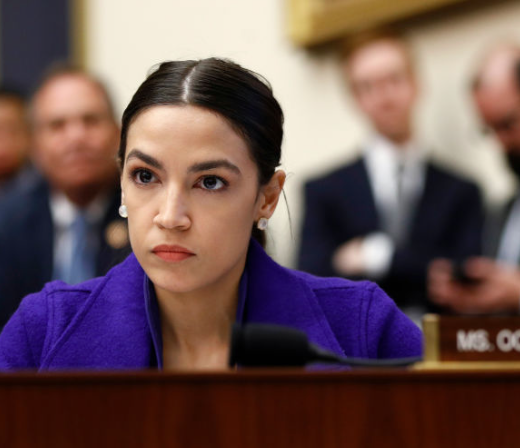 This self-avowed-socialist is the #1 fundraiser among Democrats in the U.S. Congress over the last quarter.

Let me rephrase that with emphasis:

Alexandria Ocasio-Cortez has raised more than Democrats who have been there for decades. She’s out-raising the leadership of the entire Democrat Party.

What’s going on here? Checking her FEC filings, you’ll find only 10 of the thousands of contributions she’s received come from inside her district. Instead, she’s building an enthusiastic base of small donors all across the nation. And she’s giving much of the money she raises to socialist candidates running as Democrats against other Democrats she deems insufficiently left wing.

AOC is becoming a powerful and feared force in the Democrat Party and the leading representative for the party’s far left base.

It’s absolutely true that much of what she says from a rational economic standpoint is laughable, but we make a big mistake if we take her lightly.  There are obviously people behind her pulling the strings, but she seems more than happy to dance for them so long as she ends up on top.

And she will end up on top if the crop of far left socialists she’s supporting should win election.  They’ll all be beholden to a 30 year old economic idiot who two years previously was tending bar.

I’m a big believer in giving credit where credit is due.  And there’s no question AOC has been the central mover in taking the Democrat Party so far left it’s hardly recognizable anymore.  Even a washed up septuagenarian socialist hack like Bernie Sanders is now taken seriously largely thanks to the youthful agitations of AOC.

In fact, watching the socialist (I mean Democratic) debates these past few months, I often had the impression the candidates were speaking to an audience of 1.  That 1 being the 30-year-old sweetheart of American leftism.

Building on what Obama started, she’s helped move the party of JFK to the party of Bernie and Liz … from the party that once celebrated America’s history and heritage to a party that doesn’t even know what they are … from a party that stood up to Hitler and Stalin to a party that nearly idolizes dictators like Nicaragua’s Manuel Ortega and Venezuela’s Nicolas Maduro … and a party that denounces the killing of the world’s number 1 terrorist as a war crime.

When Obama talked about “fundamentally” changing America, it was useful rhetoric.  For Ocasio-Cortez, it’s the main goal. Exchange capitalism for state control, substitute political correctness for free speech, replace the values of Judeo-Christian religion with those of humanist philosophy, dismantle the military, and finally jettison the antiquated notions of freedom, human dignity, and personal responsibility.

AOC doesn’t believe in American exceptionalism. She believes in the United Nations, one-world government, leading from behind, and state control over every aspect of our lives. Her Green New Deal has taken center stage as the preferred Democrat approach to handling climate change, and should she elect more members of Congress like herself, it may well become a reality. Or, at least as real as a completely unworkable, nutty, bankrupt proposal can become.

AOC also wants to throw open our borders, bring Medicare-For-All, and eliminate any semblance of free markets. She thinks the government should decide where we live, where we work, what we drive, how long we live, what kind of medical treatment we get, and what we eat. But the good news is that she’s happy to make sure the government pays for it all — keep the printing presses running, no hyper-inflation to see here.

In exchange for promising to turn out huge numbers of young voters to support the antiquated Bernie Sanders, he’s pledged she’ll hold a senior position in his new administration. Just shoot me now!

Her unique perspective on criminal justice may in Bernie’s mind qualify her for the job of Attorney General. Apparently, robbery, rape, and murder have gotten so bad in her hometown of NYC that the mayor wants to hire 500 additional cops. She’s against it. Instead, she suggests ending prisons as the way to punish criminals.

When it comes to climate change, she agrees with Bernie that more abortion is part of the answer. She also says only socialism can heal our ailing climate – presumably because there would be so little manufacturing, industry, or reason to drive anywhere. And let’s not forget the drag seniors create on society generally, and our healthcare system especially. Watch out Bernie; if you don’t tow the line expect to be put down with the rest of us over 70.

Nancy Pelosi requires her fellow Democrats in Congress to pony up $250,000 a year in support of the party’s efforts to elect challenger candidates and re-elect vulnerable incumbents. AOC refused, telling Pelosi to take a hike. She’s not giving a dime to a Democrat Party she believes is insufficiently socialist. It’s Pelosi vs. AOC. My money – along with the contributions of thousands of donors across America – is on AOC.

I’ve often made fun of AOC’s more egregious or ridiculous comments and proposals. But based on her mammoth fundraising take, and how much money she’s spending to elect like-minded wackos on the left, I no longer find her funny.  In fact, I think she might be scarier than I ever imagined.

Democrat Party In Support of Crime