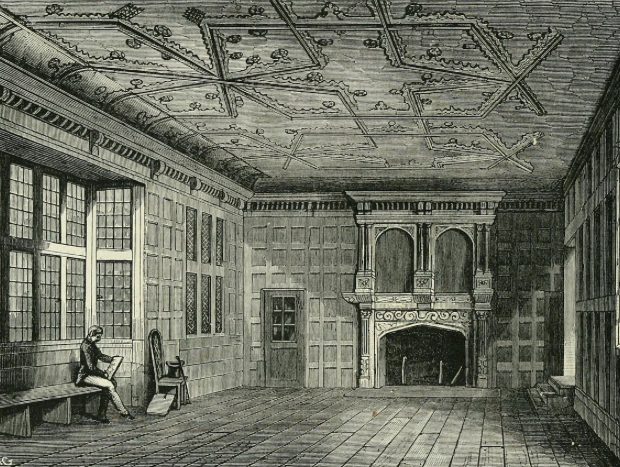 From the late 15th century until the middle of the 17th century, a court sat in London that became infamous for its abuses; indeed it is considered to have been the primary motivating force behind our Fifth Amendment constitutional protections against compelled self-incrimination. The conditions under which a defendant is allowed to “plead the Fifth” to avoid self-incrimination are frequently interpreted in reference to the methods employed by this court. Meeting in a room in the Palace of Westminster whose ceiling was adorned with gold stars, this court became known as the “Court of the Star Chamber.” Thus the Star Chamber has, for centuries, symbolized disregard of basic individual rights.

In 21st century America, we have our own Court of the Star Chamber. It is best known as the FISA Court and whether as a result of foolishness or worse on the part of its constituent judges, it is responsible for violations of basic rights that are in egregious violation of the principles of justice and due process that are embodied in the Fifth Amendment to the Constitution.

The FISA Court was originally established pursuant to the terms of the Foreign Intelligence Surveillance Act of 1978 (the “Act”) that was introduced by the wretched Sen. Edward M. Kennedy (the coward who left Mary Jo Kopechne to drown, for those who have forgotten). It was enacted in reaction to certain excesses of the Nixon administration and is intended to provide judicial and congressional oversight of the government’s covert surveillance activities of foreign entities and individuals in the United States, while maintaining the secrecy needed to protect national security.

The act enables electronic surveillance (wiretapping, for the seniors among us), without a court order, in order to obtain “foreign intelligence information” necessary to protect America against actual or potential grave attack, sabotage or international terrorism. Such surveillance without a warrant may only be conducted if there is no substantial likelihood that it will acquire the contents of any communication to which a “United States person” is a party.

In the alternative, the government may request a warrant from the FISA Court. An application for such a warrant requires that the Court find probable cause that the target of the surveillance is a “foreign power” or an “agent of a foreign power.”

The 11 judges of the FISA Court are appointed by the Chief Justice of the United States for seven-year terms. The Court meets in secret and all that is reported are the number of warrants applied for, issued and denied. From 1979–2006, 22,990 applications for warrants were made to the Court; only five were definitively rejected. In 2017, that record was significantly upgraded but the Court still granted over 71 percent of the applications that were made. In 2018, the government made 1081 warrant requests from the FISA Court. One request was withdrawn and only one request was refused. 1079 of the government’s warrant requests were granted. 1079! So much for James Comey’s claim that it is difficult to obtain a warrant from the FISA Court. The FISA Court has been a rubber stamp for the government to violate the Constitutional rights of American citizens with impunity and with no other oversight.

Of necessity, these warrants must remain secret if they are to be effective. It is obvious that this process requires a high degree of integrity among the judges and among those government agents seeking warrants because of the opportunity for abuse that is inherent.

On October 18, 2018, the FISA Court itself, in a response to a government application to review certain procedures, published an unusual opinion in which it detailed extraordinary abuses of the trust that we repose in the intelligence agencies of our country. It actually outlined how the FBI repeatedly violated restrictions by spying on Americans without having legitimate law enforcement or counter-intelligence purposes. The data that exists out in the ether of the Internet about the daily lives and interests of ordinary Americans can be easily abused. The FISA Court actually revealed the extent to which the FBI has gathered this data, not only to use against ordinary citizens but against members of Congress and Presidents, as well.

Senate minority leader, the reptilian Charles Schumer, in an unveiled threat to President Trump stated:  “You take on the intelligence community, they have six ways from Sunday at getting back at you.” The evidence of recent months demonstrates that these agencies have attempted to destroy the president, with the active connivance of the Democrats and the media. And the FISA Court, by approving whatever was placed in front of it by the denizens of the government swamp, was complicit in a brazen attempt to overthrow the duly elected President.

In the context of the impeachment of President Donald Trump, the FISA Court’s failure to monitor the agents of the security apparatus of the government has led to this shameful example of a novel come to life, with shadowy deep state operatives using usurped powers to destroy a President.

Here is what I think should happen. The president has been impeached by the House and despite Pelosi’s childish games, the matter will be tried in the Senate. Although my personal preference is that all of the swamp creatures who engineered this attempted coup should be hauled before the Senate Judiciary Committee and grilled for hours under oath about their misdeeds, that would be counterproductive. Instead, the articles of impeachment from the House should be dismissed summarily, in a manner similar to a court’s decision to grant a motion to dismiss a baseless claim.

However, after the impeachment matter has been flushed into the sewer where it belongs, the Senate Judiciary and Intelligence Committees should hold epic hearings touching on every matter that was dredged up by the Democrats in the House and by their disgusting accomplices in the Federal law enforcement and intelligence agencies. As part of this process, the two Senate committees must address the serious faults that have been laid bare in the entire FISA structure.

Finally, the FISA judges need to step up and make their own inquiries into the flat-out falsehoods that were the basis for the travesty that has been inflicted upon the citizens of the this nation (and upon President Trump) for far too long. And they need to exact the criminal penalties that are concomitant with lying in a legal proceeding. The FISA Court has the ultimate responsibility for the outrageous abuses committed by sworn officials of the Federal government.

Nor can the court claim ignorance of the abuses. On April 20, 2017 the Landmark Legal Foundation filed a request with the FISA that it be permitted to file an amicus curiae brief. The request set forth many of the abuses that have now been uncovered. That request was refused by the court. In the entire sordid affair of the attempt to get rid of the duly elected President of the U.S. one of the things that I cannot understand is where the hell have the FISA judges been? These jurists were lied to. That fact has been well established by the Horowitz Report. Why has not one single FISA judge during this entire sorry process stepped up to make his own inquiries? Why did they not permit the submission of the amicus brief that would have clarified the abuses? Instead they hid behind their secrecy. Why are these judges silent?

The travesty of their silence is a further consequence of the incredible toxicity of the swamp’s attempt to nullify the 2016 election. Heads need to roll. A great many people (Comey, Brennan, Clapper, McCabe, Strzok, Page, et al) must be tried, convicted and jailed and the unscrupulous Pelosi, Nadler, Schiff, et al should (in a perfect world) be deleted from the Congress and removed from the Federal payroll. The entire structure of FISA, the Star Chamber proceedings that are its necessary element, must be completely scrapped and re-done and the FISA Court must be purged.

The Star Chamber that is the FISA Court is inherently offensive to our standards of justice, but the very judges who oversee this secret court have the power to begin the elimination of the Star Chamber aspects of their authority and to bring things back into a balance that is suitable to our constitutional republic.

This article was originally published in The Charleston Mercury.