Recently PolitiChicks editor Ann-Marie Murrell posted on Facebook a picture I love. A picture of her parents crossing a bridge, but no idea where the bridge went to. Pictures like that always attract me and especially remember one in the home of my wife’s parents. A river running through a woodland and a walking path following the river. I often wondered whether the artist had an idea where it led to or if it was planned to make us imagine possible locations.

Our lives are full of such paths. We have thousands of choices we have to make from early childhood to the end of our days. They range from simple things like what time to get up in the morning to whether we should take a job or not and to pick a soul mate to spend our years with. Decision making can be as minor as whether to have a pizza for dinner or one that decides for us whether we go to Heaven or Hell, and most importantly the acceptance of Jesus Christ as our Lord.

We start each New Year thinking about how we hope things will work out for us in the 365 days ahead and some of us make Resolutions. All this is personal of course. However, there is a bigger picture beyond us. Quo Vadis or “Whither goest thou?” America. 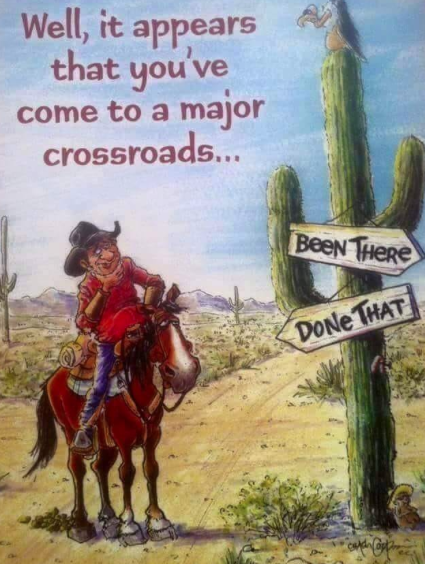 I have to think of this as we go into 2020 and realize the division in our nation can make it hard to know where we are headed. What path will we take? We are at a crossroads and our nation is deeply divided. Certainly as much if not more so than during the Vietnam war.  It would seem at this point that in November voters will have two choices that go beyond candidate and party.  It is more a choice between  socialism versus capitalism.

This division has been very clear during the impeachment debates in the US House of Representatives and which ended with a very partisan decision. Something which may or may not get to the US Senate. Both sides of the issue seem very set in regard to what they are telling us must be done.

The very recent news about the successful ridding the world of Major General Qassim Suleimani has brought total disagreement between Democrats and Republicans. Democrats, fueled bythe mainstream media, call it assassination, especially those running for president, which is pure hypocrisy. They seem to have forgotten that when John F. Kennedy was president the CIA was directed to carry out the successful assassination of three leaders of nations. Republicans have realistically said that the death of Suleimani was an important step in the war against terrorism.

It must be added that all this talk about how horrible it is that nations involve themselves in the politics of other nations is hogwash. It has always been done and that has been true of our own nation. This writer is not saying it has always been wise, however it has been a necessity. We not only have spies in unfriendly nations but in allied nations as well. And there are spies from outside our nation in our major cities as well.  Also let us not forget that President Obama did what he possibly could to keep Israeli Prime Minister Benjamin Netanyahu from being re-elected. The Obama administration additionally did its part to help the present Iranian dictatorship stay in power.

It is all very well and good to say “why bother to be involved, the General Election is months away.” By the time we get to November it may be too late for our Republic.  When this writer was a teacher of government there was a quote always put on the chalk board the very first day of classes for students to read. Edmund Burke’s statement “The only thing necessary for the triumph of evil is for good men to do nothing.”

We are at a crossroads. One more real than any depictions by an artist as this is urgent. We need to be involved in whatever capacity we can, write letters, attend meetings and of course vote every opportunity we have Not just voting nationally or for president, but in every election considering every candidate.

My home state of Virginia is already in a mess with a Democratic legislature and governor planning to take away many of our rights beginning with gun ownership. You may say that is not socialistic, but if it walks like a duck and it talks like a duck then it must be a duck. Government control.

Diamond & Silk: "We Got Off the Democrat Plantation!"