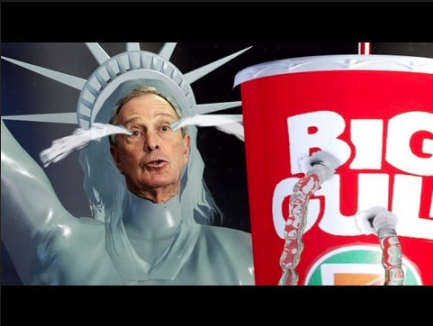 Despite once being a Republican, “Little Mike,” as former mayor Michael Bloomberg was known in New York City, has always been left of center in his politics. But he was also known for being pragmatically transactional.

I’ve always thought there’s something to be said for pragmatism in politics— having a willingness to adjust your thinking when it’s necessary to get something done for the common good. But Mayor Mike shows us how transactional pragmatism can also bring disastrous results that undermine not only the common good, but sane thought.

In a desperate effort to make himself acceptable to leftist Democrats, Bloomberg has said some truly un-sane things lately.

To wit, Bloomberg recently declared California’s one-party brand of far left politics a “model” for the rest of the country. What exactly is he advocating?

These are all realities in the former Golden State and they are all entirely due to leftist politicians who dominate California’s halls of power. As Mayor, Bloomberg’s sympathy for similar liberal policies was unmistakable. He gave New Yorkers an 18% property tax, he advocated citizenship for New York’s illegal migrants along with the 25 million or more illegal immigrants in America, and he supported things like a ban on coal. He even pursued a one-man crusade to limit the amount of sugar and salt New Yorkers could consume.

But unlike every other candidate in the Democrat primaries for president this year, Bloomberg is a guy who has actually achieved things both inside and outside of politics. He built a massively successful media business that employs hundreds of people. And he was repeatedly re-elected with more votes than the combined totals of all the other Democrats running.

A lot of people hoped his success in business would provide Democrats at least one red-blooded capitalist choice in that party’s primaries. But Bloomberg isn’t the capitalist many hope he is, and he never was except in the way someone like Agostino Rocca was a capitalist. Rocca was an arms manufacturer who helped finance the early years of Mussolini’s fascist dictatorship. In turn, Rocca became wealthy as one of Mussolini’s favorite industrialists.

Rocca wasn’t a fascist, he only used it as the means to his end. Bloomberg isn’t a fascist either, not really. But one of the problems with pragmatism is that it often subverts principle to self-dealing. It produces the same intense pandering that drove Kamala Harris’s melt down. Bloomberg’s pandering smells of desperation, it’s the rank odor of a phony.

And while it would be over-reach to suggest Bloomberg is a fascist, there’s no question he suffers a serious streak of authoritarianism. It’s not just sugar and salt Bloomberg wants to ban. Bloomberg has spent hundreds of millions of his own fortune on the campaigns of politicians who agree with a nation wide gun ban.

When a very bad man recently walked into a church with a shot gun and killed two people, one of those attending the church that day pulled his gun and shot the shooter dead. The whole thing was over in seconds. It’s ridiculous to think the mentally insane and criminally prone would abide by Bloomberg’s gun ban. If it had been in effect, there’s no telling how many people would have been murdered.

Bloomberg has demonstrated he has zero regard for the 2nd Amendment, and utterly opposes law-abiding citizens having the right to defend themselves or their families.

We can only guess what other provisions of the Constitution he would shred in an enlightened sense of what’s best for us.

It’s a troubling sign of our times that Mike Bloomberg was ever hailed as a moderate when he entered the Democrat primaries. His record as New York City’s Mayor shows a deep disdain for individual rights and personal freedom.

It’s an attitude that fits perfectly with the new-left ideology of the Democrat Party, but California shows how that thinking works out in reality. It seems unlikely the rest of America will want to recreate California in their own communities.