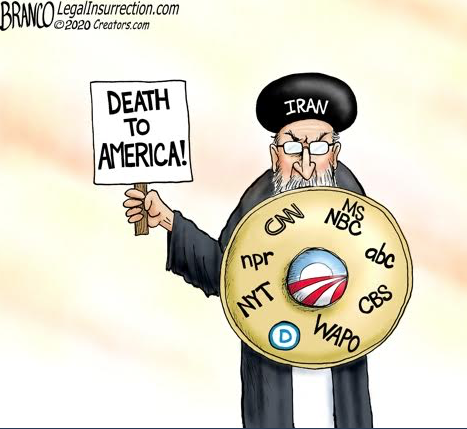 Twenty years ago, after the 9/11 attack, you would have had a pretty tough time finding one red-blooded American who chose to defend terrorists overAmerica.  In fact, 9/11 inspired tens of thousands of young Americans to serve in our armed forces and fight to stop terrorism.

My, how times have changed.  It’s hard to believe, but Democrats far and wide are condemning President Trump for “assassinating” Qassem Soleimani, the Iranian general responsible for implementing Irans policy of support terrorism throughout the middle east.

Let’s be clear, Soleimani wasn’t assassinated.  He was a soldier on the battlefield engaged in fighting the United States, attacking our embassy, and killing our people.  Soleimani was killed by an America committed to defending itself.

Does anyone remember Democrats crying murder when Obama authorized the killing of Osama bin Laden?

Even those Democrats running for president can’t bring themselves to approve President’s Trump action against Iranian terror.  They can’t support this or anything else he’s accomplished.

Super socialist Elizabeth Warren, whose campaign is quickly crumbling, accused Trump of assassinating the general to distract the media and the American people from impeachment. It’s not the first time she’s been admonished to check her facts.  The truth is that Soleimani directed ongoing attacks against our embassy 3 days before Trump sent Iran a message via drone.

Were it anyone but Iran, anywhere else in the world but Baghdad, the attacks against our embassy would have been considered an invasion of sovereign U.S. territory.  Clearly, an act of war.  Is it really conceivable that Trump and Soleimani got together and agreed such an attack on America, and Trump’s subsequent missile shot at the evil general, were necessary to benefit Trump’s re-election?

If you believe that then you might also believe Joe Biden staged the whole drama in order to move the focus away from his and Hunter Biden’s troubles with corruption, conflict, and paternity scandal.

Speaking of Biden, in the late 90’s he claimed any attack by Iran on our embassies functionally amounted to an “act of war,” and should be treated as such.  Apparently, the former Senator from Delaware and Obama’s Vice-President, forgot because now he’s defending the Iranians and condemning President Trump.  Or rather than a missile intended to kill the world’s worst terrorist, perhaps he thinks it stronger to hit with a squadron of Tiger Swallowtails, the Delaware State Butterfly.

Worst of all is Bernie Sanders who was thoroughly outraged that an American president would put the safety of Americans ahead of terrorist king pins.  He’s gearing up to introduce legislation that bans presidential action against Iran. But then Sanders has had trouble in the past discerning who the enemy is.  He and his wife honeymooned in the former Soviet Union while it was under the heel of Nikita Khrushchev.  If you’re my age you may remember it was Khrushchev who famously pounded his shoe on a podium while promising to destroy the United States.

Democrats want to drive America down a very dangerous path, the same path Barack Obama pursued of apologize, appease, and pay off.  That’s really why we’re in the mess we are today with Iran.  When you kow-tow to bullies they keep bullying.  It’s only when the bully realizes he’s got more to lose than gain that he finally backs off.

In fact, it’s now painfully apparent that the $150 billion Obama sent Iran during the final year of his presidency is the same money Iran used to buy the missiles fired at our bases and train the terrorists who are attacking our embassy.

I get why the Democrats don’t want to confront the world’s psychopaths. It’s hard, difficult, work.  There’s risk involved.  Thankfully, this time, Trump’s targeting and killing one of the world’s worst terrorists has worked to deter Iranian aggression and caused Iran to back off.  At least for a while.  It may not always work out that way.

But what’s clear is that Trump won’t return to a foreign policy that allows America’s Secretary of State to give Russia 20% of our uranium supplies in exchange for a $2 million dollar contribution to her foundation as happened with Hillary.  He isn’t going to cut a sweetheart deal with despots in order to make himself look good as Obama did with the Iran deal.

In fact, just the opposite.  He’s working to clean up the Iran mess the Obama-Biden Administration left behind.  So far he’s doing just fine.

The Political Misdirections in ABC's 'Truth and Lies: Jeffrey Epstein'