This year, 25,000 people signed up online. That was unrealistically optimistic because organizers had only obtained a permit for up to 10,000 protesters. And they only ended up with thousands. 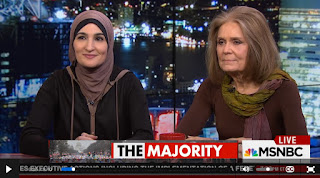 Impeachment should have encouraged a bigger turnout, but the snowflakes couldn’t handle the snow.

The first person quoted in D.C.’s WUSA9 report explained that she couldn’t come because, “it’s supposed to be really cold and snowy and that is definitely a factor for me.”

There were few pink hats among those who did show up and a lot of black and brown winter gear. Among the few march attendees to wear pink was a bedraggled dog in a pink halter, pinks slacks, white socks and Mary Janes, while her owner waved a sign reading, “Public Cervix Announcement.”

Another dog, missing two legs, looking utterly miserable, was draped in a coat and a pink wreath while trying to move forward over the slick street on wheels while wearing a, “I’m With Her” sign.

A third dog’s sign read, “Fight like a dog for equality.” If the dog were equal, it wouldn’t be here.

At times it seemed as if there were more dogs than people burdened with trite feminist signs. And more vendors selling march paraphernalia than there were march attendees to actually wear it.

The Women’s March had not lost its capacity for its feminist bookstore brand of embarrassing stunts, but the people weren’t showing up, and the participants were being reduced to animal cruelty.

And then a blindfolded Chilean feminist collective in red jumpsuits disharmoniously performed a song in Spanish to remind everyone that the Women’s March was also capable of human cruelty.

There were the expected feminists wearing red Handmaid’s Tale costumes and the drag queens because nothing says fighting for women’s rights like a man in a wig dressed up to look like Marilyn Monroe.

The Women’s March was there to attack President Trump. But he wasn’t in D.C. No one really was.

And the weather wasn’t kind to the marchers who had come out to protest against not only President Trump, but global warming. The sleet turned their paper and cardboard signs into brightly colored mush. Only the truly dedicated hard-core Communists could keep going in the snow and sleet.

A Washington Post reporter tweeted a video of a group of Revolutionary Communist Party marchers singing their song and carrying a banner praising Chairman Bob Avakian while incorrectly identifying them as “Virginia residents” who were “celebrating the ERA vote.”

That’s like describing a Nazi rally as local Munich residents protesting against the outcome of WW1.

But the media has always deliberately mischaracterized the political extremism of lefty protests, calculatedly refusing to report on the Trotskyists and assorted professional cranks who fuel them. Coverage of the decline in attendance at the Women’s March due to revelations about anti-Semitism and support for Farrakhan among its former and current leaders has been sparse.

USA Today quoted Carmen Perez, a Farrakhan supporter who serves as co-chair, without mentioning anti-Semitism. It is inconceivable that a conservative organization whose leaders had pledged allegiance to David Duke, Richard Spencer, and the Groypers would have gotten that kind of pass from the media.

But it was hard to cover up the fact that the Women’s March in D.C. had gone to the Commies and the dogs, and could barely manage to turn out a fraction of the million activists it had once unleashed.

With Jews and blacks both boycotting the Women’s March (Black Lives Matter is feuding with its fellow hate group), all that was left were the angry WASP Communists descended from the Mayflower who had to listen to a Chilean feminist collective while cold sleet ran down their pink hats and black signs.

The weather wasn’t on the side of the Women’s March in New York City either.

The New York’s Women’s March was such a disaster that it made the D.C. march look like a success.

In 2017, the Women’s March in New York City had boasted of 400,000 attendees. This year, 400. Media accounts described “hundreds” of attendees. That surely wasn’t what Senate Minority Leader Chuck Schumer had been expecting when he arrived at the event to shake hands while wearing black gloves.

Schumer might have been afraid of the cooties of the pink hat brigade. But, more likely, the snow.

Once again, the winter weather defeated the Gaia worshipers who believe that everything from Australian wildfires to the election of President Trump is the expression of Mother Earth’s wrath.

It was cold. It was wet. And there were two competing Women’s Marches in Manhattan.

This year, the two competing marches, one against the organization’s racist leadership and the other for it, were supposed to come together and unite. The weather however had other plans and it began to snow. Just like in D.C., snowflakes began to pepper the snowflakes who wanted to fight global warming.

And the reunion of the two marches at Times Square, where the dueling feminists and racists of the two Women’s Marches could have competed for attention with the El Salvadoran illegal aliens dressed as Disney characters who mug tourists for photos and spare changes, never did take place.

Since there were only a few hundred of them, the illegal aliens dressed as Elsa would have won.

Instead hundreds of marchers had to settle for Senator Schumer waving a red Planned Parenthood sign as the wind tried to tear it out of his hands before he made his way out of the small crowd of white lefties while his African-American bodyguard looked skeptically at them.

Other Women’s Marches didn’t even try.

In Denver, the Women’s March was cancelled. In Akron, the snow forced it indoors. In Eugene, Oregon, the old march of 7,000 had been pared down to 40 people who didn’t have a permit. The Chicago march was noted mainly for its celebration of Leila Khaled, a PFLP terrorist who participated in the Dawson’s Field hijackings of four airplanes that were seen as an inspiration for the attacks of September 11.

It could have been worse. But it’s hard to see how.

The Women’s March ought to be having its moment as the impeachment that the hate group had long demanded is underway. But instead, like so much of the anti-Trump activism, it’s fading away. The Women’s March gained its power from raging suburbanites, as they pull back, the crazies remain.

And, whether they’re waving Communist banners in D.C. or terrorist banners in Chicago, they’re harder to ignore without the protective camouflage that the useful idiots at previous marches offered.

Once the cover was pulled back from the Women’s March leadership, the end was not long in coming.

The weather, the snow, rain, and sleet, didn’t help attendance at this year’s events. Neither did the bigotry of the Women’s March leadership. But the larger story may be the onset of TSD fatigue.

The media and activist groups have spent four years whipping up Democrats into a frenzy of Trump Derangement Syndrome. After a week in which the media was promising the onset of WWIII, without actually delivering, there wasn’t much enthusiasm for the fourth iteration of the march.

All the marchers know that impeachment is doomed. The Impeachment rallies failed. Now the Women’s March, the grandma of all the anti-Trump rallies, failed along with them. And the activist groups and funders behind these hate rallies face a terrifying prospect. What if TDS burnout has set in?

Imagine a political and media landscape in which selling hatred of Trump no longer works?

There’s a reason this year’s big Women’s March drama involved old photos of them in the National Archives, not Trump. The marches are winding down and the participants are worrying about how history will remember them.

Their TDS world is ending and they know they’re history.

Trump Fighting for the Lives of Babies As Impeachment Trial Continues