At CNN’s Climate Town Hall, which set out to save the world by having ten of the 2020 Democrat presidential candidates, their staffers, drug dealers, and mistresses fly out to appear in the fake news network’s facilities, Senator Bernie Sanders proposed saving the planet by killing the children. 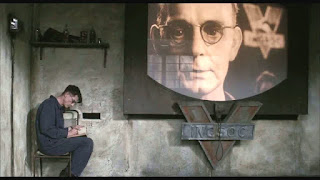 A concerned questioner at a forum being held in a green mega complex built on the site of a former slaughterhouse, appropriately enough, urged Sanders to discuss the importance of “educating everyone on the need to curb population growth.”

“Would you be courageous enough to discuss this issue and make it a key feature of a plan to address climate catastrophe?” the anti-kids schoolmarm demanded

“The answer’s yes,” said the socialist politician who has a poor relationship with his only son. Then he suggested that this brand of environmental eugenics really ought to be applied to “poor countries around the world.”

Poor countries being any country in which the socialist millionaire doesn’t own three homes.

Saving the planet from the children is a popular environmental cause.

The World Scientists’ Warning of a Climate Emergency letter published in the Bioscience journal boasted the signatures of 11,000 scientists lending the full weight of their useless degrees to order that “the world population must be stabilized—and, ideally, gradually reduced—within a framework that ensures social integrity.”

Reducing populations for social integrity was the specialty of such innovative environmental activists as Adolf Hitler, Joseph Stalin, Pol Pot, and Mohammed.

“There’s scientific consensus that the lives of children are going to be very difficult,” Rep. Alexandria Ocasio Cortez announced on an Instagram video. That’s where most scientific consensus debut. “And it does lead young people to have a legitimate question: Is it okay to still have children?”

How many resources do children consume versus the resources consumed by streaming video via Instagram’s massive array of Facebook server farms in places like Alabama, Singapore, or near the Arctic Circle, to millions of people around the country? But if AOC were forced to choose between having 2.5 kids and being a celebrity living in a luxury building with an infinity pool, a rooftop dog park, massage rooms and a wood-fired pizza oven, which is especially good for the environment, it’s an easy choice.

But the competitive 2020 race to ruin everyone’s life for the environment is just getting started. While Bernie and AOC want to get rid of other people’s kids, Senator Cory Booker wants to get rid of meat.

This radical position allowed him to stay in the race while Senator Kamala Harris, who just wanted to ban straws, had to drop out.

“We’ve seen this massive increase in consumption of meat produced by the industrial animal agriculture industry,” Booker, who claims to be a vegan whose “spirit” won’t allow him to have an omelet, insisted. “The tragic reality is this planet simply can’t sustain billions of people consuming industrially produced animal agriculture.”

There are too many kids and burgers for the planet. And if you take a kid out for a burger, you might as well be running over polar bears in a Hummer or holding a Climate Town Hall in Manhattan.

And just think about what that will do to Cory Booker’s spirit animal chickens.

No plan to make the planet miserable to save it from having fun can go without being endorsed by a few hundred grant grifters who had spent six figures of taxpayer money to buy themselves a PhD in busybodying.

And so a letter in Lancet Planetary Health by assorted scientists, grad students, people who claim to be scientists, and people who once watched an episode of Cosmos, demanded that meat consumption drop by 2030.

Not that it matters. Rep. Alexandria Cortez had claimed,”The world is going to end in 12 years if we don’t address climate change.”

If we’re all going to be gone by 2031, the final year of the fall of man, why not go out with a burger and a glass of wine?

Or, as the New York Times recently inquired, “How Does Your Love of Wine Contribute to Climate Change?” . The Times never gets around to asking its readers how their love of lies printed on the skin of dead trees is killing the planet.

Coffee? Forget about it.

A large cappuccino, the kind that pays Starbucks to indoctrinate staffers on their white privilege for asking crazed vagrants to stop shooting up heroin in the non-gendered bathrooms, has a carbon footprint of 235g.

That’s the equivalent of driving from Cleveland to Toronto. And if you get a large latte, that’s like a car trip from Los Angeles to San Francisco.

I didn’t make that up. Environmentalists did.

Will those ecos at least let you have some bread and water? Even the living standard of medieval prisoners is too much for our green barons.

The ecos have been waging a long bitter war on bottled water. “A million bottles a minute: world’s plastic binge ‘as dangerous as climate change,” a typically non-hysterical Guardian headline bleats.

Since the ecos also tell us that climate change is worse than WW2, you can understand why Roger Hallam, the co-founder of Extinction Rebellion, a bunch of shrieking grad students who spray red paint on things to spread awareness of what a bunch of wankers environmentalists are, dismissed the Holocaust as no big deal.

Who can be expected to care about gas chambers when the bottled water catastrophe is upon us?

Your daily bread? Forget about it.

One loaf of bread puts out 1.7 pounds of carbon dioxide. That’s like tying a whale to a jet liner, basting it in gasoline, and having it along with some bottled water through a plastic straw.

An estimated half a percent of the UK’s imaginary carbon emissions are caused by bread. The obvious answer is a bread ban.

At least Marie Antoinette would have let the people eat cake. Her latter day successors in the UK won’t even let you have a loaf of bread, a bottle of water, coffee, wine, or anything except soy and more soy. Or Soylent Green.

Forget about eating or kids. What about being left alone to live in your house?

“If we want to keep cities safe in the face of climate change, we need to seriously question the ideal of private homeownership,” The Nation clamors

“We need another kind of escape route—away from our ideologies of ownership and property, and toward more collective, healthy, and just cities,’ the socialist rag argues.

If you’re keeping track, you can’t have kids, a house, a glass of wine, a burger, or anything.

The real question is what in your life will environmentalists allow you to keep?

The answer is nothing.

Americans Are Voting With Their Feet (And Moving Vans)