The delirious Democrats are going down in flames, even before they take on Trump in the Presidential Election later this year. 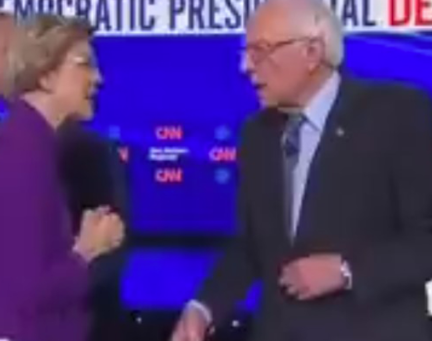 Did you see the vitriol between Warren and Sanders go out live at the end of the televised January Democratic Presidential Debate?

In progressive speak, Sanders is a toxic male white anti-female supremacist. Where was the #MeToo Movement when you needed them most?

They were missing in action. You never see them when it comes to radical Demo darlings doing the abusing.

Van Jones on CNN, however, was mournfully critical following the televised spat. “To see those two have that level of vitriol, nothing I saw tonight on that stage would be able to take Donald Trump out.”

New covert video (from Project Veritas) showed the Sanders campaign team openly discussing their boss. Kyle Jurek, a field organizer, had this to say about his boss:

“I think he (Sanders) is a legit Socialist masquerading as a democratic Socialist. I mean the whole basis of Communism is like people and plans above property. Like you can give them a choice like you can join the revolution, you cannot be a boot-licker, you can sit idly by and allow it to happen, but if you take up arms against the revolution, then you should expect a violent response.”

This is why they are determined to confiscate personally owned forearms. They want civilians to be disarmed by the time they impose their Socialist/Communist revolution in America.

It was chillingly expressed by Jurek when he said, “There are things more important than the rule of law in the United States.”

Think about that profound statement for a while. This is why they are bringing in attorney-generals and judges in Democratic states and cities that refuse to impose the law on criminals. This is how criminals who hurl abuse and apply violence against Jews in New York and New Jersey can walk out of court scot-free thanks to liberal no bail justice. The courts in Democratic cities have revolving doors.

They defy and redefine the US Constitution at every turn.

Jurek was asked, “Are there ANTIFA people here?” (In the Sanders campaign)
Jurek answered, “There are some here. A lot of them are on the Bernie campaign, but there is a DSA chapter here also.”

This is the loose talk in the Sanders camp.

How can you say, Democrats, that a major part of your party are not off their heads? What has become of your party? When you are not plotting revolution, you are obsessed with impeaching your president based on plots, hearsay, and lies?

And what were Democrats doing moments later?

They were marching over to the Senate to try to impeach the President.

Good luck with that!

Which side is doing the people’s business for the benefit of the voter? The juxtaposition of these optics will linger with the American voter in the US Elections later this year.

The result is clear ten months ahead of judgment day.