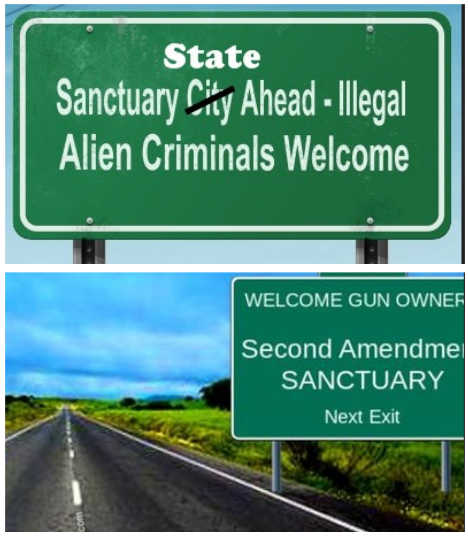 If you’re like me, you believe the re-election of Donald Trump is vital to the future well being of our country. Getting the House back, and solidifying conservative control of the Senate is also important. But none of that assures things won’t go off the rails if we lose state governors and legislatures to the far left.

Ever since California took the lead in violating federal law and declaring its sanctuary status; a host of cities, counties, and states have followed along.

At least 11 states have joined California in holding themselves above federal law by harboring illegal immigrants who commit crimes beyond entering the country illegally.

New governors in Illinois and New Jersey have recently proposed huge tax increases to help fund the added costs associated with their sanctuary status. Turns out, protecting and supporting criminals is expensive and local pols are forcing taxpayers to pick up the tab. It’s wrong on every level.

Even in the relatively red states of Tennessee, Kentucky, and Arkansas, politicians have signaled they’re open to more illegal immigrants. It’s likely taxpayers in those states will soon be surprised by the higher taxes required to care for the influx. I don’t think that’s quite what voters were thinking when they elected those governors and legislators.

Virginia which once was dependably red has moved well to the left thanks mostly to its status as Washington DC’s chief bedroom community. Virginia’s very liberal Governor Ralph Northam announced he would employ the National Guard to confiscate the guns he doesn’t think people should own when they refuse to turn them over. Northam’s put millions into Virginia’s budget to enforce his gun restrictions and imprison otherwise law abiding citizens who refuse to bend the knee. He’s also announced he’ll cut their phone lines, sever their water connections, and shut off their electricity until they comply.

Interesting that the people most responsible for electing these and other leftist state politicians are two billionaires, Michael Bloomberg and George Soros. Normally, the left wouldn’t give these two the time of day. Liberals never tire of blaming the wealthy for every problem America faces – real or imagined. And yet, these two billionaires are a big part of the reason for the left’s success at the state level.

Bloomberg and Soros have put millions of dollars into the campaigns of leftist governors and state legislators. They’ve succeeded in reshaping many of the state capitals around America.

When Virginia’s new anti-gun laws kick in after the New Year, you can be sure things will get ugly. The gun confiscation scheme is tantamount to taking cars away from people who have never even received a ticket.

Governor Northam is a despot pure and simple. It’s 100% dictatorial. And it’s one way he repays Bloomberg and Soros for their generous financial support. Northam could not care less for the rights or freedoms of the people he represents.

Several states have passed laws making the theft of anything valued under $1,000 a misdemeanor – including California. Such crimes are no longer investigated or prosecuted. Much to the surprise of the politicians in those states, theft is up 40% or more. Want a new shirt? Help yourself down at the local Macy’s. Target’s got the latest PlayStation? Go ahead, take it. You no longer have to worry the police might interfere or even show up. One has to wonder.

Both Michigan and Kentucky are holding Muslim days in January and yet neither state recognized 9-11 by setting aside that day to commemorate the 3,000 people who were killed by Islamic extremists. You know the pandering is out of control when it’s directed at people who want to replace Constitutional rights with Sharia law.

Just a reminder, that means if you convert from Islam, it’s off with your head.  Your 12-year-old daughter can be forced to marry a 40-year-old man.  Women don’t enjoy the same rights as men. And gays can be thrown off buildings or hung. By all means, enjoy your Muslim Day.

All this leftist nonsense is costing state residents dearly in lost freedom and higher taxes. Next November, we need to re-elect Trump and take back the Congress. It’s just as important though that we show local leftist politicians the door. Enough is enough.