I’ve voted now for 5 decades worth of local, state, and national candidates, the first time for Richard Nixon.  Other than the occasional local election, I’ve never missed a chance to vote. I guess it’s just ingrained that the voting isn’t just a right for me, it’s a responsibility I owe my country.

Now I’m starting to think I was wrong all these years. 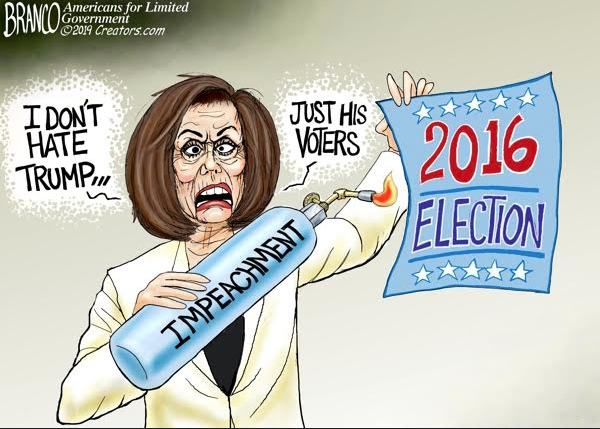 Nancy Pelosi, the Speaker of the House of Representatives and the next in line after the Vice President to occupy the oval office, is saying things these days that seem to me to devalue the very idea of “by the people.”

Seems to me Pelosi’s comments amount to a dangerous sentiment, namely that the 2020 election is too important to be left in the hands of voters.  I heard one of her colleagues the other day, Congressman Al Green, another far left liberal say something even worse.  Representative Green said, “I’m concerned if we don’t impeach this president, he will get re-elected.”

So Nancy Pelosi and her pet poodle, Adam Schiff, set about trying to betray the votes of millions of Americans and undo the perfectly legal election of Donald Trump. She and most of her Democrat colleagues in the House started down this road long before impeachment was even mentioned.  Well, except for the insane Maxine Waters who started chanting impeachment as soon as the votes were counted in 2016.  She hasn’t stopped. She chants “Impeach 45” every chance she gets.

At least since the start of the Mueller probe, Democrats were committed to impeaching Trump.  For them, impeachment was a policy in search of a reason.  When the Mueller probe founded no evidence of Trump colluding with Russians, you could hear the sad gasps of Democrat officials in every nook and cranny of the land.  They tried, but failed, to press the charge of obstruction.  They pushed the Stormy Daniels theory to anyone who would listen – until her lawyer was sued for malfeasance and dishonesty.  For years, they’ve promised that Trump would be found guilty of cheating on his taxes.  Sadly for them, it hasn’t happened, yet.

In every moment of the last three years, Democrat leaders have focused on nothing other than attacking Trump.  In fact, they quite literally have achieved absolutely nothing in the Congress except to resist, harass, and block any possible progress on any issue other than impeachment.

You’d think in all that time, they could have found something that stuck.  I dare say I would not want to be in the position of having every Democrat leader in America going through my laundry or sorting my trash.  But that’s exactly what Democrats have done daily against Trump for three years.  And so far, they haven’t even found an instance of Trump cutting the label off a mattress.  We know that because if they had, we’d see the photos on the front page of the New York Times.

Three years lost, countless millions spent, resources we will never recover – and all for nothing except the chance to overturn a perfectly legal and fair election.  You’d think they’d rather fix the problems that led to Trump’s election in the first place.  Maybe find a better candidate than Hillary Clinton – a candidate who didn’t lie, wasn’t corrupt, offered something more than name calling, and exhibited less arrogance.  Oh, and maybe they should offer a candidate that wasn’t to the left of Karl Marx.

But no.  Instead, the Democrat front runners are all pushing radical plans to wreck our economy and attack our values.

I sometimes think all Trump has to do to win re-election is stop tweeting, and all the Democrats have to do to beat him is not be crazy.  So far, it doesn’t sound like either side sees the benefit in such advice.  Seems clear to me until one side or the other does so, polls will continue to show the race too close to call.

So Nancy and her fellow pit bulls in the House, combined with the four mental midgets referred to as the squad, continue their push to remove Trump on their way to proclaiming the People’s Republic of America.

Never mind that it’s the votes of the “People” they propose to invalidate …  or that more of those people are employed today than ever before … or that we have a military we can take pride in again… or that minorities are finally starting to join in the economic prosperity sweeping our land.  And never mind that after 8 years of the last president’s complaints and apologies about America – and the division he promoted among Americans solely for his and his party’s political gain – we now have a president who really loves his country.

The Democrats in the House and the Senate aren’t interested in improving the lives of the American people.  To the contrary, they block every effort to make government more efficient, more responsive, or more helpful.

Immigration, taxes, education, energy, trade; on every issue they refuse to work with Donald Trump to do what is best for America’s people.  All they can do is pursue impeachment.  You want to talk about obstruction?  If what they’re doing isn’t criminal, it should be.

Of Politics and Narcissism: The Church of the Almighty Me

Progressives Have Failed In a Big Way in The Golden State