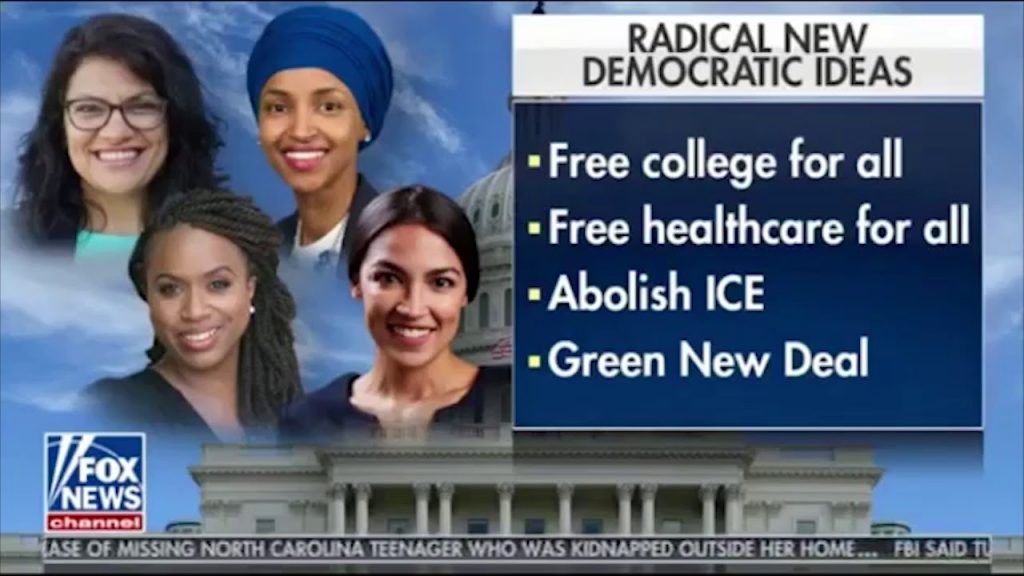 Let’s be very clear.  The greatest threat to our freedom, safety, and economic well being isn’t Russia or even China. It’s our own American radical fringe.

I’ll certainly agree that one wing of that fringe are white supremacists who idiotically believe the National Socialists of 20th century Europe may have had a point.  These people are dangerous; all 375 of them or however many there are. But whatever their number, they’re a tiny minority of Americans.

From what I can see, the much larger threat to our values and our economy are the members of that much bigger radical fringe group; the Democrats who actually believe the socialist mumbo-jumbo their Party’s most prominent leaders are trying to turn into law and policy.

The Democrat Party has been the party of bigger government, higher taxes, and more regulation for at least 50 years. But in the last year or so they’ve taken a deep dive off a very left leaning cliff.

Liz Warren recently confirmed what we already suspected, the Democrat Party she said, “is the party of abortion.” Forget pro-life, it you aren’t 100% committed to abortion at any time for any reason, right up to the moment of natural birth, then according to Liz Warren and most other Democrat leaders there is no room for you in the Democrat Party.  I’m not sure why killing babies as they exit the womb is something in which to take pride, but today’s Democrat leaders insist it’s so.

Being utterly pro-abortion though is just the downpayment on your dues to be a Democrat. You also have to oppose the observance of Biblical values in the public square. After all, this is the Democrat Party that booed God at their national convention in 2016, and for whom, removing any reference to God from our money and our public buildings is a moral act of near religious zealotry.

Opposing religion in public places isn’t the only front in their cultural war though. You also have to agree that trans-gender people have a Constitutional right to use the locker room and restroom of their choice.

In tandem with the culture war they’ve opened battle on an economic front that is just as far out.  The Vice Chairman of the National Democratic Party announced recently that 30-year-old Alexandria Ocasio-Cortez is the future of the Democrat Party.

WOW!  A young woman who proudly identifies as a member of the Socialist Democrat Party of America; who single-handedly killed 25,000 good paying jobs in her district because she didn’t understand basic economics; and who recently endorsed Bernie Sanders for president. And if there was any doubt that Democrat Leaders are committed to promoting Ms. Ocasio-Cortez’s dumb socialism, consider the fact they appointed her to the House Finance Committee where the impact of her economic ineptitude is magnified throughout our economy.

Many in the leadership of the Democrat Party also support opening our borders so anyone who wants in can come in. They support a path to citizenship for those who are here illegally. Some of them even support allowing non-citizens to vote. Seems odd doesn’t it?  If you’re going to let foreigners vote, why restrict it to those who make it across an open border. Why not just let people in Venezuela, Cuba, Russia, and Iran vote in our elections? Sad to say, but if Democrat leaders thought they’d get more votes, they’d probably be all for it.  So much for Russian meddling in U.S. elections!

This is also the party that gave us the Green New Deal – a plan that completely upends our economic system and replaces it with a socialist system that would make Hugo Chavez blush—quite an accomplishment given he’s been dead for 7 years.

Democrats justify the radical change by insisting that if we don’t replace capitalism with socialism, the ice-caps will melt and the seas will rise to drown millions of coastal residents. They say if we don’t act now, then in 10 to 12 years it will be too late.  The world will end as we know it.  Al Gore has been making the same “fire in the theatre” warnings for decades, but none of his predictions have come to pass.

One thing is certain though. If we pass the Green New Deal, the world will certainly end as we know it.  That’s because America will end.

Though you couldn’t tell from looking at Cuba, Venezuela, Nicaragua, or any of the other socialist countries around the world where misery rules, the truth is poverty worldwide is falling. It’s doing so because America’s economy is a source of inspiration, investment, and markets for growers, manufacturers, tech innovators, and entrepreneurs worldwide.

But the the Green New Deal would undo all that and force America, along with everyone else, to join the socialist countries in their suffering.  It not only costs somewhere between $51 and $93 trillion over the next decade, it will end 100’s of thousands of jobs, raise taxes on every worker, increase costs on everything you buy, and substantially diminish our transportation options.  The GND would radically change the way we live, and none of it for the better.

The Democratic Party also wants to take over your health care and put the government in charge. That’s another multi-trillion dollar plan ($52 trillion to be precise) which promises to raise taxes, reduce freedom, limit access, enforce rationing, and stifle quality. Nevertheless, it’s endorsed by most of the Democrats running for president this year.

Make no mistake, if the very same people who run the IRS, the money losing Post Office, and the money losing AmTrack system take control of your health care, we are all in dire trouble. And not just because of long waits and higher costs, though those are reason enough to oppose this hare-brained scheme. No, the bigger issue is what health care will look like when it’s run by partisan political interests who think it’s perfectly appropriate they use the force of government to limit opposition to their radical ideology? Do you really want one party control of health care in America?

Sadly, the answer is yes for many 10’s of millions of Americans who haven’t thought through the consequences of Democrat health care. Most of those Americans are young millennials, a majority of whom tell pollsters socialism is superior to capitalism. No wonder Democrat leaders love the teacher unions. Teachers have done more to promote socialism among Americans in the past 20 years than Stalin, Mao, or Marx accomplished in the previous 100 years.

I abhor and despise the racist haters in our midst, and will speak against their bigotry and idiocy every chance I get. But I don’t worry they’ll come to political power anytime soon.

The greater threat to America’s freedom and prosperity are the radicals who not only want to turn the United States of America into the People’s Republic of America, but actually have a decent shot of succeeding.

That should frighten us all. And it should energize us to sound the alarm, take a stand, and stop their insanity from gaining ground the only way we can – by piling up a huge majority against them in next November’s election.