Christians, faith, and helping feed, clothed, and provide shelter to hundreds of thousands of people, the altruistic Salvation Army. Their support couldn’t come at a better time; the red kettles that used to be a sign of charity, kindness, and goodwill are suddenly a symbol of liberal controversy.

Chick-fil-A, a fast-food chain based in Georgia, chose to stop donating to the Salvation Army last month. The reason? They chose to shift to a “more focused giving approach” (One may just ponder over just how focused the outlet’s ‘giving’ approach can be with its new socialist cronies). The drifting of this company, coupled with the critique against the Red Kettle campaign, had given rise to some serious attacks from the far-left on the Christian foundation of the Salvation Army, the latest target of the wrath of the progressives.

However, in a righteous turn of events, President Trump has gone ahead and recognized the charity organization and displayed a kind of administrative coordination with it.  The Salvation Army, with its motto to serve people that transcends beyond the traditional norms of discrimination, is known across the globe for the humanitarian efforts that it puts forth for social change. A major misinterpretation that people have had for the longest time about this non-profit organization revolves around its treatment of the LGBTQ community.

That being said, among the 23 million people that the Salvation Army helps, there are several men and women who belong to the sexual minorities as well. In this respect, the wrong claims that have accompanied the fast-food chain’s decision are disproved. Chick-fil-A’s announcement regarding their new alignment with far-left organizations like the Southern Poverty Law Center and the Covenant House has, of late, been subject to condemnation by numerous leaders. The fallout has led to a massive spread of misinformation surrounding the campaigns and alleviating work that the Salvation Army is connected with.

Preaching the Christian gospels of truth and humanity, following the way of life that Christ had enlightened his followers about, the Salvation workers, as they are called, consider themselves as soldiers and the hierarchy that’s put in place in the organization follows that of the military. The belief of these workers lies in the fact that it is through service towards others that the Christian faith will continue to live, getting renewed in its spirit.

The work undertaken by the Salvation Army include programs that are designed to help children, provide food to the poverty-stricken, bring people out of the havoc wreaked by disasters, and efforts to put an end to human trafficking. The organization’s setting up of the World Service Office back in 1977 facilitated the systematic improvement of living conditions, skills, and productivity in communities. Through the many initiatives that come under the huge umbrella of social-welfare programs that the SAWSO has embarked upon, they have been successful in engendering a new sense of self-confidence in people.

The SAWSO’s Red Kettle Campaign is a noteworthy Christmas tradition that aims at raising money for those in need and thus, distributes the fund raised to varied communities across the nation. It is, in fact, the oldest fundraiser of this kind in the country. Ranging from toys for children, coats to those who seek refuge away from home, food for those struggling with hunger to several social service schemes that are active throughout the year, the campaign encompasses all groups of people with the kindness and sincerity with which these altruistic ideas are carried along with 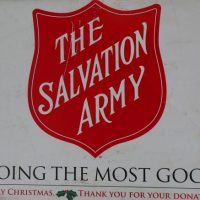 Altruism, best of all, describes the nature of the organization. The President’s acknowledgment of the Salvation Army translates to the acknowledgment of a basic human trait- altruism; selfless extension of oneself for the happiness of others. Amidst the ostracizing influx of socialist attacks against Christian establishments that work for the betterment of the society, the White House has ensured the continuation of the good-willed actions that these bodies have been relentlessly watering.

This Christmas, setting apart all dimensions of political wars and disconnections, everybody should make their minds up to do something for the needy; to bring food to a household that goes to sleep every night fighting a terrible battle with hunger; to wrap a child’s trembling body with the warmth of love and relief; to eliminate the unseen barracks of poverty.

Daniel Greenfield: What If You Hold Impeachment Rallies and No One Comes?

PolitiChicks: Our Best of the Best for 2019