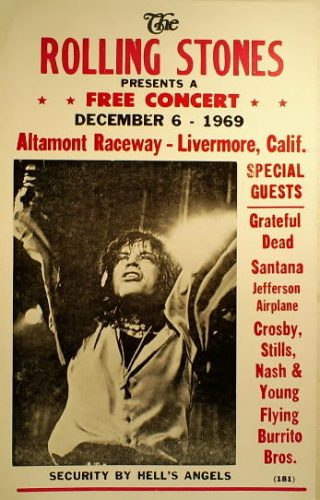 It’s been half a century since the tragic debacle of the Altamont concert. What most folks know about it (if anything) was that The Rolling Stones performed, the Hell’s Angels wrecked havoc and someone was killed.

It wasn’t supposed to be that way. This event was going to put a shining climax on the 60’s counter-culture of peace, love and communion (and lots of drugs) and usher it into the 70’s. After all, the concerts leading up to this had been a successful demonstration of the 60’s vibe like Woodstock and the Monterey Pop Festival (or at least they were reported that way). In fact, Altamont was billed to be the Woodstock West.

The planning for this show, however, did not go well. It was originally scheduled to take place at Golden Gate Park. Arrangements were made by The Grateful Dead which included hiring the Hell’s Angels as security. What could possibly go wrong with that? The whole thing was kept low key until the day before and then promoted on radio as a free concert. Expecting around 75-100,000 attendees, the actual number was close to 300,000.

The Hell’s Angels main task was to keep folks away from the stage and the performers (and their equipment). It didn’t help matters that the stage was low and easily accessible. And for some inexplicable reason, the bikers were told to park their motorcycles in front of the stage. Add in lots and lots of drugs and you had the makings of a powder keg exploding. Which is exactly what happened.

As the concert progressed, the crowd grew closer and closer to the stage. A lot of this was a domino effect of people pushing forward so that those in the front didn’t have much choice. By the time the Jefferson Airplane took the stage the “Angels” were violently beating back the crowd with pool sticks and fists. Marty Balin actually came off the stage to try and calm the situation. He was knocked out cold by a biker named Animal.

The situation deteriorated further when some started trampling the motorcycles to get to the stage. This escalated the violence further. Now the Angels were trying to protect their own possessions. Jerry Garcia of the Grateful Dead watched what was happening in horror. They definitely weren’t digging the scene and decided to split, turning tail and running. Why the concert wasn’t stopped at this point is a question for the ages. Of course those not near the melee had no clue what was going on. A good number of those attending didn’t find out until the next day. Being hundreds of yards away insulated them from participation or harm.

Adding more fuel to the fire was the fact that there was a lot of “bad” acid at the concert. Many people had to be treated at the Red Cross tent. One reporter was given wine spiked with acid and she spent most of the time hiding under the stage waiting for the hallucinations to pass. Another man striped naked while wildly dancing near the stage and was beaten to a pulp by the angelic bikers.

By the time the Stones hit the stage it was pretty much pandemonium. Mick Jagger made an attempt to quiet the crowd/riot to no avail (which probably isn’t surprising knowing what kind of message they articulated in their music).

Then came death. As The Rolling Stones played, Meredith Hunter, a young black man got too close to the stage and was confronted by one of the Hell’s Angel. When he tried to run away a gang attacked ensued resulting in the stabbing death of this young man. He did brandish a gun but according to eye witnesses it was after the attack started, not before as the Angels contended. Many have blamed his death on racism but the Hell’s Angels were attacking lots of people mostly whom were white. It’s fortunate no one else lost their life from the attacks. Incidentally there is an urban myth that the stabbing took place while Jagger was singing “Symphony for the devil”. This is false. It was “Under my thumb”.

So who bears the responsibility for this infamous event? The Rolling Stones seem to have received most of the blame over the years. But is that fair? The show should have been stopped long before they took the stage. Mick Jagger tried to quiet the violence several times during their set. No, it wasn’t near enough. But at least they they didn’t run away as cowards like Jerry Garcia and the Grateful Dead. It is astounding how they have been whitewashed from any culpability in the tragedy.

So instead of a happy climax to the 60’s, the event was the antithesis to peace and love (or as Jefferson Airplane sang, “When the truth is found to be lies…”). Violence and hatred were on full display along with the severe detrimental effects of rampant drug use. And instead of community we saw people rushing the stage and virtually no help for those being pummeled (and killed) by the Hell’s Angels. It was like a really bad trip man.

Oh and in case you’re wondering, only a handful of folks stayed after the event to help clean up. So much for taking care of “mother earth”.

If you wish to read more about the event, Saul Austerlitz has written a detailed and informative book, “Just a shot away: Peace, Love, and Tragedy with The Rolling Stones at Altamont”.

You can also read a critical account of the event from Rolling Stone magazine here.

The Greatest Threat to America