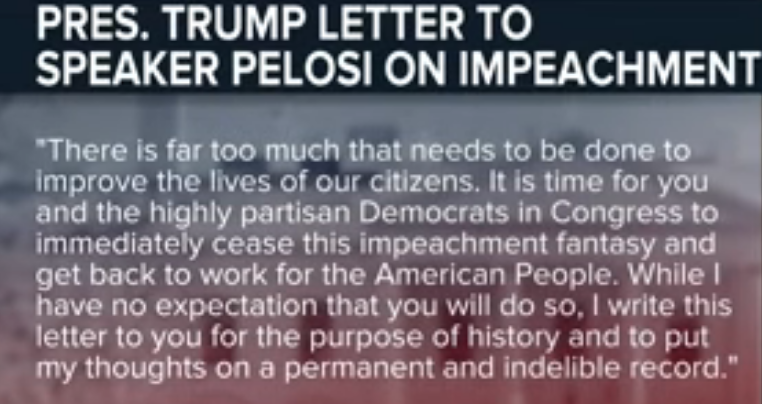 President Trump has done it again. On the eve of a historic impeachment vote in the House, the media was all set for a news cycle of negative coverage of Trump – again (YAWN).

But that quickly changed when Trump wrote a letter to Nancy Pelosi. Now HE is controlling the narrative, as he does time and time again. There are countless examples, one of the recent ones being Trump’s releasing the letter of his phone call with the Ukrainian President. That completely destroyed the fictional account that Schiff was concocting. The fact that he went ahead with it anyway and that the Democrats are actually going to vote for impeachment on ZERO evidence is incredibly astounding. Their hate and anger of Trump for winning the 2016 election has blinded them to logic and reason. Trump knows this and is happily pushing them over the cliff.

You can read the letter here.

Personally I wanted to stand up and cheer. Trump brought up every item the Democrats have tried to use to destroy him and threw it back in their face with facts (using much of their OWN words against them). It was a type of reaction consolidated into one letter that we have been waiting for a long time. It is one of the most devastating critiques of the left that I have ever seen.

Here are a few of the highlights of the letter:

By proceeding with your invalid impeachment, you are violating your oaths of office, you are breaking your allegiance to the Constitution, and you are declaring open war on American Democracy. You dare to invoke the Founding Fathers in pursuit of this election-nullification scheme—yet your spiteful actions display unfettered contempt for America’s founding and your egregious conduct threatens to destroy that which our Founders pledged their very lives to build.

Even worse than offending the Founding Fathers, you are offending Americans of faith by continually saying “I pray for the President,” when you know this statement is not true, unless it is meant in a negative sense. It is a terrible thing you are doing, but you will have to live with it, not I!

Your first claim, “Abuse of Power,” is a completely disingenuous, meritless, and baseless invention of your imagination.

You know full well that Vice President Biden used his office and $1 billion dollars of U.S. aid money to coerce Ukraine into firing the prosecutor who was digging into the company paying his son millions of dollars. You know this because Biden bragged about it on video. Biden openly stated: “I said, ‘I’m telling you, you’re not getting the billion dollars’…I looked at them and said: ‘I’m leaving in six hours. If the prosecutor is not fired, you’re not getting the money.’ Well, son of a bitch. He got fired.”

This is what I indicated above. Shining the light of truth on this whole charade.

The second claim, so-called “Obstruction of Congress,” is preposterous and dangerous. As liberal law professor Jonathan Turley warned when addressing Congressional Democrats: “I can’t emphasize this enough…if you impeach a president, if you make a high crime and misdemeanor out of going to the courts, it is an abuse of power. It’s your abuse of power. You’re doing precisely what you’re criticizing the President for doing.”

Everyone, you included, knows what is really happening. Your chosen candidate lost the election in 2016, in an Electoral College landslide (306-227), and you and your party have never recovered from this defeat. You have developed a full-fledged case of what many in the media call Trump Derangement Syndrome and sadly, you will never get over it!

Remember when the media was all over Trump in 2016 for not committing to accepting the election results?

Speaker Pelosi, you admitted just last week at a public forum that your party’s impeachment effort has been going on for “two and a half years,” long before you ever heard about a phone call with Ukraine. Nineteen minutes after I took the oath of office, the Washington Post published a story headlined, “The Campaign to Impeach President Trump Has Begun.” Less than three months after my inauguration, Representative Maxine Waters stated, “I’m going to fight every day until he’s impeached.” House Democrats introduced the first impeachment resolution against me within months of my inauguration, for what will be regarded as one of our country’s best decisions, the firing of James Comey (see Inspector General Reports)—who the world now knows is one of the dirtiest cops our Nation has ever seen. A ranting and raving Congresswoman, Rashida Tlaib, declared just hours after she was sworn into office, “We’re gonna go in there and we’re gonna impeach the motherf****r.”

Now, I just LOVE this next section because Trump lays out all his accomplishments and it goes on a LONG TIME!

You and your party are desperate to distract from America’s extraordinary economy, incredible jobs boom, record stock market, soaring confidence, and flourishing citizens. Your party simply cannot compete with our record: 7 million new jobs; the lowest-ever unemployment for African Americans, Hispanic Americans, and Asian Americans; a rebuilt military; a completely reformed VA with Choice and Accountability for our great veterans; more than 170 new federal judges and two Supreme Court Justices; historic tax and regulation cuts; the elimination of the individual mandate; the first decline in prescription drug prices in half a century; the first new branch of the United States Military since 1947, the Space Force; strong protection of the Second Amendment; criminal justice reform; a defeated ISIS caliphate and the killing of the world’s number one terrorist leader, al-Baghdadi; the replacement of the disastrous NAFTA trade deal with the wonderful USMCA (Mexico and Canada); a breakthrough Phase One trade deal with China; massive new trade deals with Japan and South Korea; withdrawal from the terrible Iran Nuclear Deal; cancellation of the unfair and costly Paris Climate Accord; becoming the world’s top energy producer; recognition of Israel’s capital, opening the American Embassy in Jerusalem, and recognizing Israeli sovereignty over the Golan Heights; a colossal reduction in illegal border crossings, the ending of Catch-and-Release, and the building of the Southern Border Wall—and that is just the beginning, there is so much more. You cannot defend your extreme policies—open borders, mass migration, high crime, crippling taxes, socialized healthcare, destruction of American energy, late-term taxpayer-funded abortion, elimination of the Second Amendment, radical far-left theories of law and justice, and constant partisan obstruction of both common sense and common good.

BOOM! Over the course of my adult life, whenever the left attacks someone for doing something bad, you can pretty much bank on it that THEY are the ones who are guilty of it.

Your Speakership and your party are held hostage by your most deranged and radical representatives of the far left.

That is the REAL driving force behind all of this.

More due process was afforded to those accused in the Salem Witch Trials.

You are making a mockery of impeachment and you are scarcely concealing your hatred of me, of the Republican Party, and tens of millions of patriotic Americans. The voters are wise, and they are seeing straight through this empty, hollow, and dangerous game you are playing.

The poll numbers bear this out. Impeachment support has cratered and the Trump approval rating has sky-rocketed.

One hundred years from now, when people look back at this affair, I want them to understand it, and learn from it, so that it can never happen to another President again.

One hundred years from now people will look back on this and shake their heads in derision at the anger and derangement of the radical left. Assuming we survive this assault on our country from the left.

Whoever wrote this letter is brilliant. It not only is a great defense of Trump, it is another method with which he connects with his voters. We all know the facts that he presented in this letter but it is wonderful to hear it from him and taking the Democrats to the woodshed on it. Because make no mistake, the left’s anger is not just at Trump, it is at all of us that support him. He has OUR back. We need to make sure we have HIS next fall.

Daniel Greenfield: In Europe, the Muslim Murder of Jews is a Mental Illness