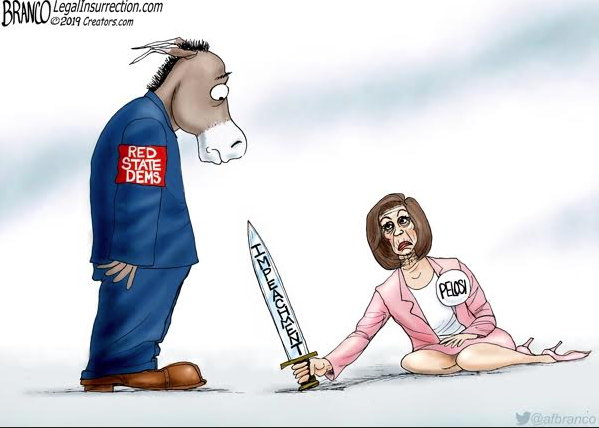 We all contribute in our own way to light this world.  Some people are just brighter.  Some have been dimmed by their lives of lies and greed.  The best we can hope for is that our light has helped show others the way.

When I consider the legacy of the 2019 Majority in the United States House of Representatives, I am troubled.  Their behavior resembles a overly melodramatic form of bad dinner theater as backed by an out of tune pit band with the musicians being provided by the media. To paraphrase a current commentator, various members of Congress are poor legislators, but even worse actors. Obviously, they know the song, but they can barely remember the music.

I cannot believe Senator Chuck Schumer when he speaks with his droning pontification.  Though it may be a cure for insomnia.  Likewise Schiff and Pelosi have not sold me, or any thinking American, that President Donald J. Trump is guilty of the sort of High Crimes and Misdemeanors that warrant an enactment of the Articles of Impeachment.

It is vastly amusing that on December 18th and 19th various Democrats wore black, portraying the fake solemnity that they perform so well. It recalls a lyric by Bob Dylan from his classic song, “Idiot Wind”: “The priest wore black on the seventh day and sat stone-faced while the building burned.”

I was thrilled when three Democrats voted against the two paper-thin articles of impeachment as instituted by Speaker Pelosi’s “court.”  They are as follows:  Collin Peterson, a 75-year-old Democrat who voted against the opening of the impeachment inquiry.  Peterson is the Chair of the House Agriculture Committee.  President Trump won Peterson’s District in Minnesota by 30% in 2016.  Peterson has been approached by top Republicans to switch parties.  At this time, he has declined their offer.

Jared Golden of Maine is a freshman Democrat who had a strange “I am Solomon” moment.  In other words, he split the impeachment baby and voted for the Abuse of Power article.  Yet, he declined to vote for the Article of Impeachment regarding an Obstruction of Congress. Well, at least his conscience and common sense spoke to him once.  President Trump won Golden’s District by 10% in 2016.

The Democrat that is causing Pelosi to speak in tongues (perhaps using an arcane form of Latin) is New Jersey’s Jeff Van Drew.  Van Drew, along with Peterson, voted against the initial opening of the impeachment inquiry and voted against the two articles of impeachment as instituted by Pelosi.  Trump won Van Drew’s District by 5% in 2016.  Van Drew has had his own Road to Damascus moment and he is switching to the Republican Party.

My issue with these two articles of impeachment is that there is no substantive, documented evidence against President Trump.  The charge of  “Obstruction of Congress” is as laughable as a skit by the late comedian, George Carlin. I mean really, obstruct Congress? What did President Trump obstruct them from?  Their odd and constant drunken stupor?  Their cocktail parties or affairs with staff?  Their meetings with Lobbyists?  Where is the obstruction when they do nothing but enrich their own coffers?

We keep hearing that President Tump is not above the law.  Neither are the Speaker and the Democrats.  What is truly troubling to me is the lack of due process given to President Trump.  By that I mean the actual Constitutional right of any citizen, including a sitting President, to confront their accuser and present evidence to prove their innocence.

No whistleblower, no evidence, just continued pontification and out right lies from Representative Adam Schiff and Speaker Nancy Pelosi.  The process as instituted by these incredibly corrupted miscreants has lacked any appropriate decorum.  Additionally, with all their evocations of the founding Forefathers of America, this has not been a Constitutional process.  Harvard Law Professor Emeritus, Alan Dershowitz, has recently confirmed that. Dershowitz, a life long Democrat, has stated recently that the two Articles of Impeachment are contrived and do not meet the necessary Constitutional standards for impeachment.

Our forefathers, including Thomas Jefferson and Ben Franklin, are now spinning so fast in their graves that they may reconstitute.  Pelosi’s fake religious platitudes are also an insult to the God I know and love.

Like a cornered rat in Little Italy, Pelosi must realize she is in trouble.  Why else would she hesitate to send over the voted on Articles of Impeachment to the Senate?  In essence, she wants the Senate to agree to her “terms”. A real quid pro quo and an abuse of power.

Speaker Pelosi, you cannot hold the Articles of impeachment until you get the results you wish.  It’s time for the Supreme Court to rule on this continuing malfeasance.

When you consider the nature of projection in this world, Nancy Pelosi is guilty of an Abuse of Power in her stewardship of the House Speaker’s Chair.  Likewise, if anyone has obstructed Justice, it has been Nancy Pelosi and Adam Schiff.

I do hope the Justice Department fully investigates the criminal and treasonous behavior of some members of Congress and members of previous administrations.  The United States Government and its Congress have behaved like a poorly run criminal syndicate for far too long.

I recently discussed this as a guest of Dr. Dave Janda on his show, “Operation Freedom.”On my December 15th appearance, Dr. Janda and I discussed our current House of Representatives. Even though we were being playful, we made a cognizant point that our current government was behaving more like a criminal syndicate.  Which is why Congress is trying to limit President Trump’s Attorney’s defense of his client. Through practical experience Rudy Giuliani can spot a criminal at 50 paces.

That also holds true for many American people.  Those of us not indoctrinated by the media or the common core education system recognize the criminals in government far too well.  Why are many public servants that are paid around $190 thousand a year worth millions of dollars?

The wealth of many members of Congress is the best argument for real term limit legislation.  Perhaps a salary cap? Perhaps a modicum of real public service?

When President Trump is resoundingly re-elected in 2020 maybe we will see the dead wood, that’s has been disguised as government, removed.  That can be to the woodpile, to jail, or to public disgrace, all options work for me.  Time to vote them out of power and start rounding up all the traitors that are hell bent on destroying America.