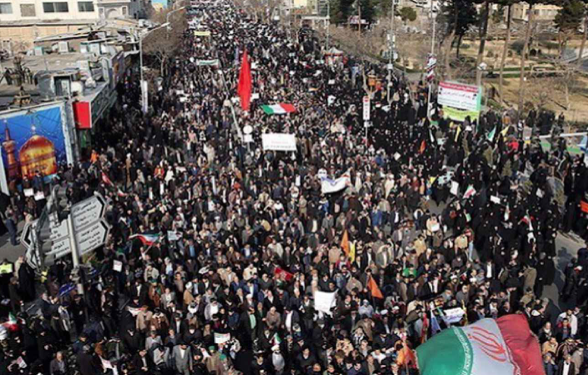 As protests continue to wreak havoc in Iran with a breadth and intensity not seen since the 1978 revolution against the Shah, Tehran’s clerical rulers and their Revolutionary Guards enforcers have become increasingly desperate.

That could be seen in videos that recently surfaced of the horrific massacre of hundreds of unarmed protestors in Bandar-e Mahshahr, an oil town on the Persian Gulf near Iraq. Secretary of State Mike Pompeo and his top Iran advisor, Brian Hook, both condemned the regime for sheer evil of this deed, worthy of Hitler’s executioners.

So what is the regime to do? Why, blame the Americans, of course!

In every Iranian media today you will find articles and columns blaming President Trump, Secretary of State Pompeo, and yes – even me! – for fueling the protests.

Hossein Shariatmadari, the executive editor of Kayhan, a daily that is run by Iran’s intelligence ministry, is a top regime propagandist. When things go wrong for his clerical brethren, he reassures them that it’s not their fault: it’s the Americans.

Over the years, he has repeatedly identified me as the head of some secret-spooky CIA HUMINT program to assist the Iranian opposition.

I’m flattered he thinks that one person, unfunded, unsupported, with only a voice, can have such an impact. And I’m positively thrilled that he actually believes that the CIA has such a program (alas, they do not).

Nevertheless, in his latest screed, published in Kayhan on December 4, he positively fumed.

“Didn’t Trump officially support the protests as soon as they started? And didn’t he announce that America will meet the needs of the rioters? I say, Damn him! Mike Pompeo, Trump’s secretary of state, and Kenneth Timmerman, former CIA member and currently director of the American institute NED [National Endowment for Democracy], also acknowledged that the CIA has not only helped the Iranian rioters by providing software systems but also has delivered them hardware.”

For years, the State Department has funded software developers to provide Persian-language messaging apps and encrypted web-browsers for Iranians. That’s a matter of public record.

Early iterations of these apps were woefully deficient, and actually caused more harm than good, since Iranian statehackers were able to penetrate them and expose the Iranians who were using them.

I am guessing that the technology has gotten better since then. Why? Because the regime felt so threatened that immediately when the protests erupted in response to the gasoline price hikes on November 15, they cut off all access to the Internet nation-wide, starting with the popular Telegram app that reportedly is now used by forty million Iranians (half the entire population).

Iran’s so-called Cyber Army monitors traffic on these apps on a regular basis. And they monitor opposition news sites, especially those that have tentacles into the regime itself and expose the abject corruption of the regime’s leaders.

Iran’s intelligence services goes to great lengths to neutralize these opponents, not just by hacking their websites, which they do frequently, but by sending assassins out to kill them.

In early November, an Iranian regime assassin gunned down a cyber activist, Massood Molavi, in the streets of Istanbul, in a brazen attack caught on live video surveillance cameras. Molavi’s sin? Exposing secret documents from within the regime’s intelligence services on a Telegram channel known as “Black Box.”

Secretary of State Mike Pompeo referred to Molavi in a recent press conference where he blasted Iran’s clerical and military leaders for their murderous crackdown on protesters and dissident.

Just one month earlier, the regime boasted of capturing the publisher of a popular opposition news site, Ruhollah Zam, luring him from Europe to Iraq with promises of big money. After they forced him to make a televised confession, he disappeared.

But no amount of bluster, and clearly, no amount of bullets, can check the will of the Iranian people to resist the tyranny of their usurper rulers.

As I wrote in 2009, on a previous occasion when IRGC Brig. Gen. Hossein Shariatmadari and others in the state-run media in Iran tried to lay the “blame” on me and my foundation for an earlier run of nation-wide protests, I would be happy to accept such an honor, however misplaced.

However, neither I nor my board can take credit for such power or influence. As I wrote then, “The people of Iran have shown through their courage, independence and determination that they don’t need help from anyone outside their country to get them to take to the streets. I have full confidence that they will get rid of the dictators of Tehran. Apparently, so do the regime’s leaders.”

Wonder if they’ve started fueling the Leader’s escape jet yet?

Originally published in Frontpage Magazine (with permission from author)

Clare M. Lopez: Who's Trying to Wreck the US-Saudi Relationship?