I have waited all year to declare my favorite for “movie of the year.”

Both of my choices are very high impact films with SOCIETAL IMPLICATIONS.

Both will likely have an emotional impact on you and continue to be thought provoking for many days to come.

I do not like having to pay to go to a movie without knowing all about it in advance; I prefer to wait until they come out for sale, and then buy the movie to keep for reference and to loan to others. Every movie that I go to in public is one of the XD type theaters (which helps due to my hearing and is more vivid) and hopefully the reclining chairs or having other amenties, as going to the movies should be a great experience. And I go for those that put a lot into the cinemaphotography, and either have great dialogue, are intriguing, are entertraining, and hopefully that have a message. If they have some type of utility, then that is attractive.

So, I purchased online only a very few and have watched each of these two movies at least three times each.

I just re-read the entire script for both, comparing that with the movie that I purchased, and have seen more than a few hundred interviews, reviews, and videos about each of these two movies. One in particular I have put a bit of study into and picked apart. The other one its content I know about going back thirty years or more.

COMMONALITIES – What do these movies have in common?

1. Each one is a CAUTIONARY TALE of what is happening and can happen in our society.
2. Each is entirely REALISTIC, grounded, and with no unrealistic special effects or science fiction
3. Each was written, directed, and produced by the same person.
4. Each was written for one specific main actor to star in it.
5. Each was written to send a message to society about what really happens. This goes beyond entertainment. Each had a mission.
6. Each features a main character who has major flaws and problems, all of which were caused by others. In these movies you get to see possibly manifestations and what goes wrong with people. In the most chilling, riveting, and saddening of ways.
7. Each is an intensive character study that teaches the audience about what really happens to so many out there in the real world. Be ready for that, as neither are pleasant.

At the end of either movie, there might be something wrong with you if you either don’t cry and/or are deeply affected and are haunted for hours or days by it.

I had a very tough time with one of these movies in particular. I needed to be alone for more than a day after seeing it for the first time. It really tore me up. And I wanted to do something about it.

It was very tough to deal with as over the years I have known so many people who have experienced what these movies are trying to tell us about. Both films will strike a chord, especially with those who have any degree of empathy and compassion. So, get ready.

So, based upon both and what I knew about what each were trying to get across, I have wanted to help in any way I could. Evoking this type of action is a sign of great art. 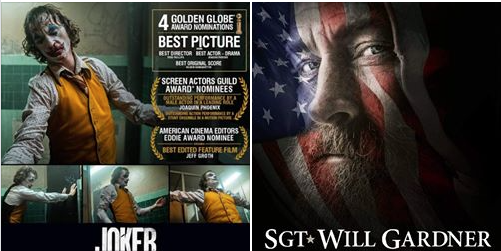 The Joker is the highest selling R-rated movie of all time and 33rd of all movies, with over $1.1 billion USD in revenues so far. I studied every aspect of how the movie was made and it is a veritable masterpiece, no doubt about it.

Joaquin Phoenix (as Arthur Fleck /Joker) put so much preparation into the role, transforming into his characters, especially studying mental illness, effects of psychoactive medications, etc. and incorporated it so artfully and believably. My theory is that the screenwriter / director and company only leveraged the DC comics / Joker origin story as a template in order to tell this story as a cautionary tale. To send a message. That also helped to win them the finding and approval from Warner Brothers and the other investors as well as knew that it would automatically get them a guaranteed audience of DC comics fans and fans of the lead actor. Add to that the two trailers produced by Director Phillips, masterpieces in themselves. Followed by the cinematic masterpiece and original score. Upon analyzing the plethora of reviews and commentary on YouTube, social media, and so many sites, this movie has developed a following like no other that I have seen in years.

Sgt. Will Gardner is a movie that needs to be seen by every American. It is too important to not miss this one folks. The creator of this movie put his heart and soul into it. He is revered by military personnel and their families for his devotion to the cause. He delivers in this creative piece of cinema.

I cannot decide which is the “better” film. I would highly recommend each of them for their entertainment value and their impact. Both movies are Hollywood at its best. See them please,
Then, hopefully, do something about it.

In addition–Director, Producer, Writer, and star of Sgt. Will Gardner The Movie Max Martini (was also in 13 Hours: The Secret Soldiers of Benghazi and Saving Private Ryan ) and his cast & crew are donating a large portion of the proceeds of this movie to three military charities, something that has never been done before. If you are in your end of year tax deduction/charitable contributions, please consider these three that he and those who made this movie have been so generous to:

PolitiChicks: Our Best of the Best for 2019

Daniel Greenfield: Why a Jewish Democrat Praised Trump for Standing Up to Anti-Semitism