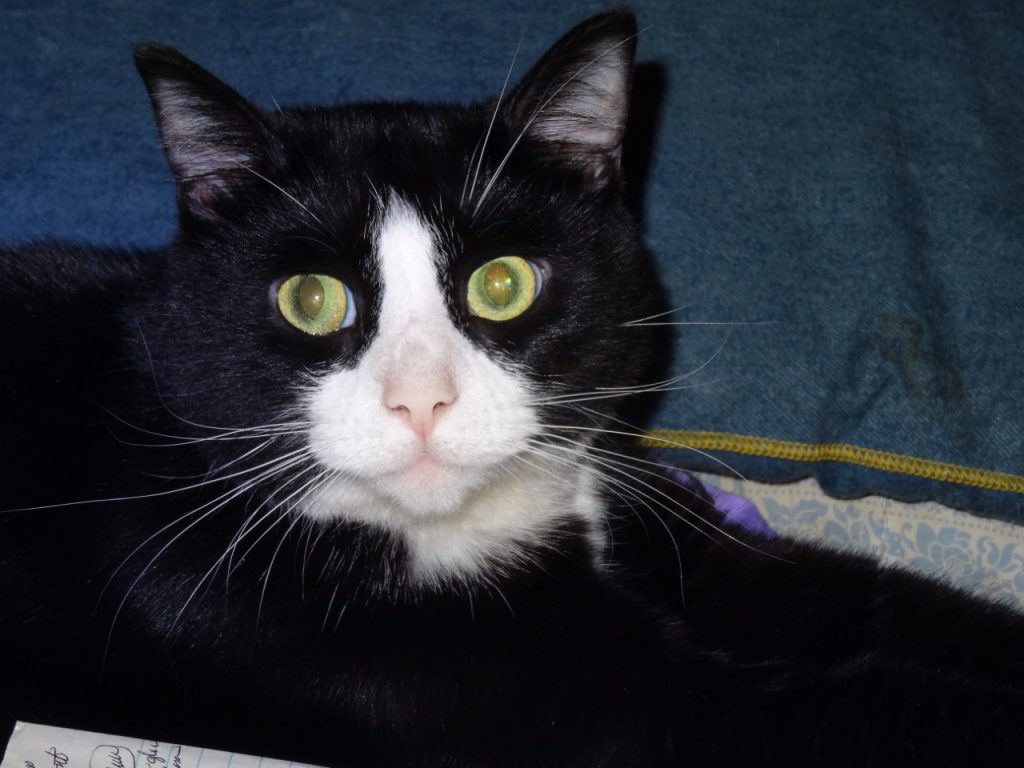 From time to time during the Christmas season I am asked by other animals why we cats are not pictured in scenes of the Nativity. The birth of Jesus Christ who was destined to save humans and other of God’s creatures. I know they refer to pictures of Mary and Joseph in a stable with the new born Christ child. There are other people there and any number of animals. Animals of all kind from sheep and donkeys to even dogs and mice. The story is too long for a cat to have to repeat so I am using my human’s data processor.

The story has been passed down from generation to generation for two millenniums and I know it by heart. My mother cat insisted I learn it by heart just the way it was told from the beginning by Chatool. Not a personal name, but Hebrew for my kind and Chatool preferred to use the broad term to represent all of us. The story goes like this.

I was born in a large litter of kittens and immediately we were given away to various humans for specific purposes. Usually to farmers to keep down vermin from getting in the grain used to feed livestock.

I didn’t go to a farm, but rather to what they called an Inn located in the small town of Bethlehem. The Inn had a stable to keep horses used by travelers and I was raised and trained in that stable to have certain responsibilities. In return for keeping unwanted creatures away I was given food and could sleep whenever and wherever I desired.

I was very young when this Nativity thing happened, it was a busy night with people coming and leaving their horses in the stable. I asked a mouse friend what was going on, Mice I could abide with. He told me it had something to do with taxes and that the Inn was already so full they were turning people away.

Then they came in. A lovely young human female on a donkey and a human man who seemed very concerned. Concerned because the female was with child. They apparently were permitted to use the stable rather than being turned aways because of her about to give birth, Of course I was curious, that was my nature. I watched them closely from a hiding place above and before the night was over heard the cry of a baby. Keeping out of sight I peered into the face of a human newborn and could swear he could see me and this drew me closer. Then near the manger where he was placed I saw the rat.

I hate rats. They ruin and make unusable valuable grain. My job was to keep them away, however  this one was extra large, almost as big as me and he was not interested in food. He was staring at the human baby. What struck me was that his eyes were not normal for a rat, they were large and red and from his mouth large fangs seemed to grow.

This was definitely a job for Chatool, a super job.

I leaped from my hiding place and confronted him.  “Get away cat” he snarled, “I have a job to do.” I hissed as I had learned from my mother “You will have to come through me” and in a second I had him by his throat. He squealed and ran for the stable rafters and I followed.

What happened next inside  the stable I am not sure as I was too busy chasing the rat and as a better climber soon cornered him. “You do not know who you deal with” he warned. Something made me glance to the floor, to the manger, and I felt two tiny eyes watching me, the baby. For some reason I felt protected and had strength I never knew I had. In minutes I had dispatched the rat and then a warning thought hit me as rats run in packs. I leaped out a window to the ground below and began to patrol.

That was the evening for me. I silently moved around the stable for hours on the lookout for prey and I had a sense of purpose I never had before or since. In the meantime other humans and animals  gathered in the stable to see the newborn child,  But they never saw me outside standing watch. As far as it was known I was never there, though I knew someone did know. Years later that was verified.

I lived a lot longer than most cats and I was replaced by a younger more vigorous male. So I became a wanderer, living off the land. Then one day I saw a large crowd and they were following one man. I could sense a very special man, different. He spotted me and normally I run from humans, but he approached me.

I do not like being picked up, however he scooped me up easily and all I could do was purr. I never felt so comfortable to be held and he rubbed behind my ears.

“Never fear Chatool, I remember you well. You gave Satan in his disguise a run for his life. It was what you were intended to do and you will be rewarded.” Then he let me down and called to one of the other human’s “Peter, you have some extra fish. Let our furry friend have some.” It was the best meal I ever had.

Later I learned this man was more than a man, he was the son of the Creator of all of us. He gave his life for the salvation of all people. And just as I know I was destined for what they called Heaven, I knew I would see him again.

That is the story handed down and I know it to be true as animals cannot lie. That is a human attribute. I do have to think this time of year about Chatool and to know the Creator has a purpose for every living creature.