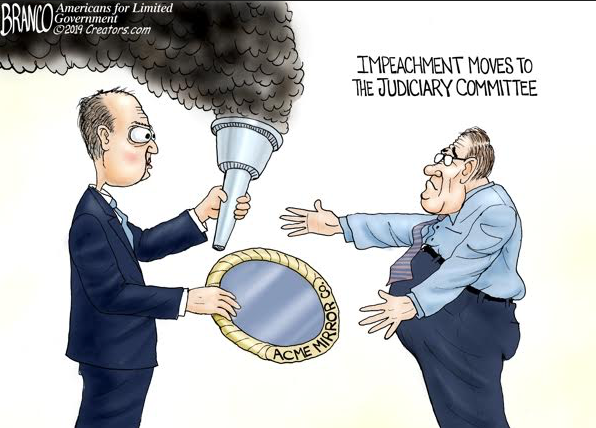 The media’s error was entirely predictable.

The paradox of impeachment is that the media’s con artists invented it, but stories alone, the commanding heights of communications, can’t actually close the deal. Like every con job, at some point the mark actually wants to see the million dollars that Nigerian prince is offering, the brand-new Tesla for only five grand, and the papers for the Brooklyn Bridge. Individual marks can be strung along indefinitely, but there are limits to how much an entire nation can be conned. Even by the media.

Abe Lincoln had something to say about that. But, then again, he was a Republican.

The media has excelled at creating investigation narratives. Its take on the Russia investigation or the Ukraine investigation convinced a lot of people that President Trump really was guilty. But you can’t impeach someone in the media. Nor can you actually try them on MSNBC. And that’s the problem.

Elections are where the media’s power lies because all it has to do is convince voters to cast a ballot, without ever having to show its work or prove its claims. With impeachment, it has to do both.

Impeachment failed to flip Republicans. It’s, at best, deadlocked among independents. And that leaves the Democrats isolated on impeachment. Poll after poll shows that most people are no longer persuadable on impeachment. Only 13% of respondents in the latest Q poll say they’ll change their minds on impeachment. That’s not a lot to work with here. And it dooms the impeachment project.

The impeachment push was never going to work without the cooperation of GOP Senate members. Without them, it becomes a purely partisan project to influence the 2020 election. And the turnout boost will be more likely to help Trump than the Democrats. It also poisons the well for further proceedings down the road. House Democrats focused on impeachment above all else. Not only is it failing, but it leaves voters with the impression that trying to impeach Trump is all the House does.

And it’s not even very good at that.

The one thing the House Democrats tried to do, they failed at. That leaves them with a choice of admitting defeat and appearing completely useless. Or dragging out the process and then, possibly crippling their ability to take the White House, to avoid admitting just how useless they really are.

If the Democrats want to blame anyone, they can blame the media. It was the media that pushed them to impeach Trump. That happened over the protests of Speaker Pelosi and warnings from Democrat strategists. But the media needed the clicks, the eyeballs, and the money. And it promised the Dems that it could carry impeachment forward no matter how weak the case might be.

The media tried to do its part. But the Democrats couldn’t deliver anything of actual substance. Again.

There are important lessons here for Republicans and Democrats about the limits of media power. The ability of a single radical political faction to control the national debate has critically damaged the country. But, at the same time, narrative power isn’t the same thing as actual political power.

The Democrat plan to stop Trump has always been built on feeding lies through the media to justify abuses of power by elected and unelected officials. But the lies fall apart once they’re examined in the harsh light of the law and that just leaves the abuses of power. And yet the Democrats still believe that the same strategy will work once their ability to communicate their message improves.

But messaging has never been their problem. The facts of the case are where it all goes wrong.

The media is the strongest asset of the Left. And it’s also its greatest weakness. Not just because the media’s business model is imploding, its credibility is tanking, and it’s transitioning to a charity. The Left believes that narrative is superior to reality. If you believe something, you can do it. A compelling story is all you need to bring change. Facts don’t matter when emotions are played on by propagandists.

Narratives are effective. But the Left always overestimates the power and price of ruling by narrative.

The people most vulnerable to narratives love stories. Con artists start out by fooling themselves. Then they fool their victims. Liars lie to themselves. The media constantly lies to itself. As does the Left.

The media keeps promoting implausible schemes for taking down President Trump. These schemes, whether it’s the 25th Amendment or a House impeachment plot, are fanciful and implausible. They all depend on the power of the media to convince Republicans to act against their own interests. But the Republicans weren’t fooled by this scheme. The media fooled itself into believing it could fool them.

That’s the price of being a liar. When you live by the lie, you’re also fatally poisoned by those lies.

Liars lose touch with reality. The cost of the con is no longer knowing what’s true. Democrats were sucked into an alternate reality in which Trump is a Russian agent and was on the verge of being overthrown by a secret deep state operation. When they actually tried to make these laughable fantasies real, the collision with reality unraveled both the plans and the lies, leaving a disaster area.

The deep state operatives volunteering for duty proved pathetically nerdy and inept. The same intelligence agencies who have bungled everything they ever touched abroad did not magically become more competent when they tried to intervene in domestic elections. Fantasy met reality. Reality won.

The entire Russia scheme was based on a document out of the Clinton campaign that was so badly put together that a random gas station attendant from Milwaukee could have done a better job. When Mueller actually went in front of the cameras, the great detective could hardly remember his own name.

After all this work, the deep state has been reduced to guys like Vindman and Strzok, men with impressive titles and poor self-control, who are as useless at home as they are abroad.

What did the media expect? Did their own reporting really lead them to expect that the NSC, the CIA, or the FBI would suddenly turn into the master strategists that they have never been for a single second?

The coup plans worked spectacularly in the pages of the press, the broadcasts of network news, and the viral stories and videos splashed across social media, but they completely fell apart in the real world.

The bungled impeachment once again shows the limits of media power. It offers a warning about the dangers of believing your own hype. The media abandoned the vestiges of journalism for narrative in order to gain power. And yet, instead of gaining power in exchange for losing an eye, it went blind.

The media inhabits a compelling fantasy world. It is able to occasionally realize this fantasy by imposing it on enough gullible people. But convincing a lot of people to live in your fantasy world isn’t a strength. It’s a weakness. The temporary power gained in the moment is more than offset by the disasters that follow. Just look at any Communist country, its fantasy economics, and the disastrous outcome.

Democrats rule through media power and Republicans envy that power. But the power to lie to people is also a curse that entraps the liar. Believing lies makes you dumb. And dumb people do dumb things.

Impeachment isn’t a brilliant strategy. It’s the outcome of lies, greed, and stupidity. But the greedy dumb liars thought that it was a brilliant plan at the time. Because they wanted to believe it.

The entire disastrous venture shows the limits of media power, of lies and living out a fantasy.

There are two ways to fight a liar. You can fight him with lies or with the truth. Not the mere assertion of truth. Convincing people of what is or isn’t true through mere words is an uphill battle. The real truth lies not in a page, but in reality. Reality is a painful way of testing lefty schemes and lies that has cost hundreds of millions of lives throughout history. But some lies are easier to test and damage the liar.

Progressives Have Failed In a Big Way in The Golden State

What’s A Billionaire Democrat to Do?