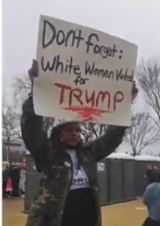 Peoples’ expression is surly. She’s sucking on a lollipop while her white baseball cap seems to say something about “killing people”. Her giant hoop earrings dangle listlessly. Behind her stand a trio of white women in pink genital hats, all smiles and selfies, with the Capitol Hill building behind them.

The racist sign tapped into a meme shaming white women as gender traitors. Peoples, a veteran lefty activist, parlayed that internet fame into a New York Times op-ed arguing that white women couldn’t be trusted. “White women are not unified in opposition to Trumpism and can’t be counted on to fight it. Instead, it’s the identity, experience and leadership of black women that we must look to,” she urged.

Her message was, “we need you to get out of the way and follow our lead.” And “would-be candidates” were told to “step aside and make space for more black women.”

That was two years ago.

Now Black Womxn For, an ad hoc coalition run by Peoples, has endorsed a white woman.

But Warren responded to the endorsement by declaring enthusiastically that, “Black trans and cis women, gender-nonconforming, and nonbinary people are the backbone of our democracy.”

Despite Warren’s assertion, none of the Womxn leaders seem to be especially “trans” or “gender non-conforming”. Some are lesbians. That’s about as far as the “Womxn” thing seems willing to take it.

What the “Womxn” lack in “trans” and “nonbinary” people, they make up for in bigots.

Senator Elizabeth Warren not only welcomed the support of Peoples, who had spent years bashing white women, but also Charlene Carruthers, an anti-Israel activist, formerly of Color of Change, who sits on the board of the Women’s March, which has its own notorious anti-Semitism problem.

Carruthers has tweeted approvingly about Louis Farrakhan, accused Israel of “apartheid”, and endorsed BDS. She led an anti-Israel delegation to Israel and accused the Jewish State of a “massacre” in Gaza.

Carruthers appears to have tweeted a selection of Farrakhan quotes, including, “Integrating the Bedroom not the Boardroom.” This is a familiar Farrakhan quote which opposes interracial marriage as a “hypocritical trick” by white people while urging a separatist black country.

This separatist black nation probably won’t be run by Elizabeth Warren. Or will it?

This is Senator Warren’s idea of “the backbone of our democracy”.

Other members of the “steering committee” of Black Womxn For include Rukia Lumbumba, the sister of Mayor Chokwe Antar Lumumba, who boasted that he would make Jackson, Mississippi into the “most radical city on the planet”, Carmen Berkeley, the Managing Director for the Planned Parenthood Action Fund, Nicole Carty of Occupy Wall Street, and a number of other veterans of lefty activist groups.

Also known as the octopus in the swamp.

And Anoa Changa, who ran into controversy over her appearances on Russia’s Sputnik. When Elizabeth Warren accuses President Trump of being in bed with the Russians, she can look at her own endorsees.

But what’s really behind this endorsement?

Peoples has gone from bashing white women to fighting for one while using the language of black nationalism. As director of Black Womxn For, Peoples and her group claimed that “a Warren victory ensures an environment in which Black community leaders can better and more easily usher in those long-overdue societal transformations that move us closer to the Liberation that we know is possible.”

By that they mean, “Black Liberation”. And by “Black Liberation”, they mean appointing “Black women, especially trans and immigrant women, Black men, Indigenous people, people of color and disabled people” to government positions. Some of whom will presumably be affiliated with BWF.

“Liberation” will be brought to you by political sinecures and the spoils system. “She is a woman who is willing to learn, open to new ideas, and ready to be held accountable by us,” the endorsement reads.

In two years, Peoples has gone from demanding that white women follow black women to rejecting a black woman, Senator Kamala Harris, and endorsing a white woman, Warren, while pretending that the power relationship is with her, rather than with Warren. Even Peoples’ racism and black nationalism proved to be transactional. Or rather, what they had always been, a façade for the usual lefty politics.

Black Womxn For is described as a project of ‘The South’ which is run by Peoples. What’s ‘The South’? It’s apparently a brand. There are few references to it online. There’s a YouTube channel with 8 subscribers whose video about Peoples (which has 1,038 views) begins with the assertion that the “most beautiful people in the world” are “black people”. Unless they’re Cherokee academics offering you a job.

Peoples is also listed as the “founder” and “lead strategist” of MsPeoples. It has no internet presence.

How desperate is Warren for black support that she and her allies were trumpeting this nonsense?

Meanwhile the likely reason why Peoples threw her support behind Warren is a detail hidden in her bio. Peoples was a policy analyst for Elizabeth Warren’s Consumer Financial Protection Bureau (CFPB) and had been working there nearly since its creation, back when the failed agency was Warren’s “baby”.

Peoples has thrown her support behind Warren, whose agency she worked at, in exchange for government jobs provided through input by Black Womxn For through Warren’s transition team.

Truly, the age of “Liberation” is upon us.

Who else backs this mighty endorsement of Warren? According to the endorsement, it was based on “hundreds of survey responses from self-identified progressive Black women and GNC/NB folks.”

Senator Warren is desperate for black voters. They’re Biden’s base. If the Democrat base were entirely white, Warren would already have the nomination locked up. To stop Biden, she needs to make a serious dent among his black supporters, but is so unable to connect with them that her campaign is touting an endorsement from her home base of Netroots activists as if it were an achievement.

And she’s willing to ignore as much bigotry as it takes to win the support of her new base of bigots.