There will never be a President Michael Bloomberg. Not unless some bankrupt African country decides to auction off the privilege to the highest bidder. But while Bloomy is no real threat to the Democrats or Republicans, his campaign is unintentionally telling the obvious truth about the role of the media. 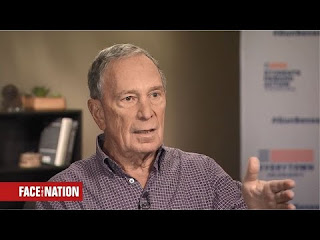 The billionaire famously banned staff from his eponymous outlet from investigating him or fellow Dems while declaring an open season on President Trump. He responded to criticism by saying that his reporters, “get a paycheck. But with your paycheck comes some restrictions and responsibilities.”

Those restrictions and responsibilities are to serve the political interests of the guy signing the checks.

The name of the guy signing their paychecks.

In response, President Trump denied press credentials to Bloomberg News reporters to cover his campaign. That was followed by GOP chairwoman Ronna McDaniel stating that, “Media outlets should be independent and fair, and this decision proves that Bloomberg News is neither.”

And that the GOP would no longer provide credentials to Bloomberg News personnel.

“We condemn any action that keeps quality news media from reporting fairly and accurately on the presidency and the leadership of the country,” New York Times executive editor Dean Baquet objected.

But Is there anything wrong with banning political operatives from gaining access to your campaign?

“We have covered Donald Trump fairly and in an unbiased way since he became a candidate in 2015 and will continue to do so despite the restrictions imposed by the Trump campaign,” John Micklethwait, the editor-in-chief of Bloomberg News, insisted.

But the restrictions weren’t imposed by Trump, but by his own boss. Micklethwait can’t say so because of the signature on his paychecks. There are lots of things he can’t say and things that he must say.

In the memo put out by Micklethwait after his boss launched his campaign, he described the Bloomberg News “tradition of not investigating Mike (and his family and foundation) and we will extend the same policy to his rivals in the Democratic primaries. We cannot treat Mike’s competitors differently from him.” There’s no problem though with treating his Republican competitors differently, as Micklethwait noted that, “our P&I team will continue to investigate the Trump administration.”

Corruption can be a tradition. And refusing to investigate your own boss is corruption. Or it is if you accept the media’s self-definition as public interest organizations searching for the truth.

But as Michael Bloomberg demonstrated, the media are nothing more than political operatives.

The Media Research Center filed an FEC complaint against Michael Bloomberg, Bloomberg News, and the Bloomberg 2020 campaign, for violating the law by giving Bloomberg, but not Trump, a pass.

And he should be praised for his honesty.

The media aren’t biased. That’s a meaningless term. Everyone is biased. Like Bloomberg News, the media is an infrastructure of political operatives who are pretending to provide a public service.

The ‘quid pro quo’ is more hidden than when Bloomberg orders his people not to investigate him, but it’s just as real. Could a pro-Trump journalist survive for long at the New York Times, the Washington Post or CNN? Forget the ideological lean of the leadership. Their audiences would never tolerate it.

The Post’s ‘Democracy Dies in Darkness’ brand dedicated it to a war on Trump. And that paid off with a massive influx of subscribers and readers. The ideological diversity of the paper, always marginal, dropped off the charts. The Washington Post no longer has any conservative contributors. Its former Republican section, Max Boot, and Jennifer Rubin, to a lesser degree George Will, are a choir who all write on the same topic that makes these papers profitable, the evils of Donald J. Trump.

Much as at Bloomberg News, that’s what the people who sign the paychecks want. Unlike Bloomberg News, there isn’t a single signer. Instead it’s the mass of subscribers who want the Washington Post to be wholly dedicated to destroying Trump. The phenomenon can be seen at the New York Times which, unlike the Post, has a few remaining conservatives, but no Trump supporters, and the paper comes under fire every time one of them questions some core leftist tenet of faith such as global warming

The media is caught in its own vicious cycle of partisanship. Its partisan skew narrows its readership and viewership to an echo chamber. And that radical echo chamber demands ideological purity. The media radicalizes its audience. And that audience radicalizes the media. This vicious cycle has transformed the media into a purely political operation whose outlets no longer recognize any journalistic standards.

A radical wealthy urban subscriber base is signing the media’s checks to fight their culture war against Republicans and the rest of the country. The media’s journalists, corporate or non-profit, are the political operatives indirectly employed by the same people who clog ActBlue with donations.

Michael Bloomberg took that relationship out of the musty closet and into the bright light of day.

Political operatives are at their most dangerous when they pretend to be concerned citizens, public servants, or anything other than what they are, the compensated proponents of a political cause.

Everything from onerous environmental regulations to the impeachment crisis had its roots in political operatives functioning under the guise of everything from noble scientists to dedicated FBI agents.

And the media is the worst example of political operatives pretending to be something they’re not.

Michael Bloomberg will never be the President of the United States. He poses no threat to President Trump. But his ambitions and ego have already inflicted a severe blow on the media. Bloomberg’s actions have opened up a debate within the media about the legitimacy of his outlet’s coverage. Even while starring in his very own version of Citizen Kane, he exposed the truth about what the media is.

President Trump and the GOP were right to dump Bloomberg News. The Washington Post and the New York Times should be next.