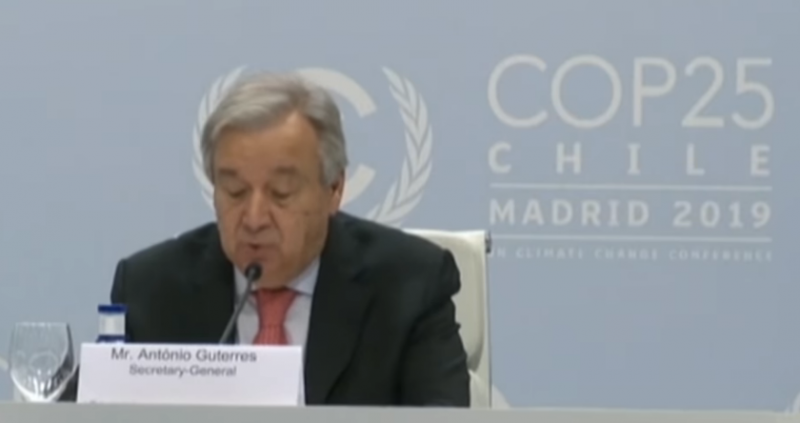 In case you missed it in all the impeachment frenzy, there was a Climate Summit recently in Madrid called COP25. The COP stands for ‘Convention of the Parties’ and it has been an annual event since 1995:

Wow, sure sounds important with all those acronyms and numbers.

At first I thought it might be a revival of the Police Academy films with Tackleberry and Hightower. Personally I think having Commander Lassard as the Climate Change Czar would be very, very nice.

So this year there were 25,000 attendees. Gee, I wonder how they all got there? Had to have been by walking, horseback or a non-powered, non-paddled sailboat. Any other method would have been hypocritically damaging to the environment and we know that would NEVER happen with these eco-saints.

In case you have a real job and too busy working or living your life, here are some fun things planned for the 2 week event:

A Ministerial Dialogue on Adaptation Ambition

A High Level Event on Forests. (Oh be still my beating heart!).

The Presidency will also launch the Platform for Science-Based Ocean Solutions (PSBOS) and the Platform of Latin American and Caribbean Agriculture Climate Action (PLACA).

Other prominent events taking place during the COP include roundtables on: the agri-food chain; SDG 14 (life below water) and SDG 15 (life on land); circular economy in cities and buildings; circular economy in packaging and business models; resilience; and SDG 6 (clean water and sanitation) and SDG 7 (affordable and clean energy). Action events will convene on industry, water, land use, oceans and coastal zones, energy, transport and human settlements. The SBSTA and the IPCC will hold joint special events on the SROCC and the Special Report on Climate Change and Land (SRCCL).

Doesn’t that all sound exciting? I know I’ll sleep better tonight knowing these folks are aggressively fighting climate change with long and impossible to understand acronyms.

But things are not so hunky dory in the dreams of the Utopians. The event has been rocked with negative vibes.

Despite a huge climate demonstration on the streets of the Spanish capital last Friday, hopes of an ambitious declaration at COP25 have smacked straight into the realities of politics and entrenched positions.

“I am very disturbed and angry,” said Carlos Fuller, the chief negotiator for the small island developing states group of countries. “At 2.30 this morning we couldn’t agree to continue working on a transparency framework, that tells the world what each country is doing, we couldn’t agree to keep working on it. That is ridiculous”

One issue that has caused a good deal of anger are the attempts by Brazil, China, India and Saudi Arabia to have the actions that were due to be completed before 2020 by richer nations, re-examined as part of the overall deal here in Madrid. Carlos Fuller says that this sort of backward focus by these major emitting countries doesn’t help anyone to make progress.

“They are part of the problem, they are looking too much backward to say that the developed countries have not done what they should have done and hence we are not going to do the same thing,”

“I disagree with that totally. We are all on this one planet together. We need to recognise the mistakes of the past and not replicate them.”

So much for the dawning of the Age of Paris Climate Accord.

I hope that they support a coalition of countries that beat back the darker forces here in Madrid that want to hold the world back,” said Jennifer Morgan from Greenpeace.

“If not, it will be a moral failure,” she said.

As I have said before, climate change is a religion that determines morality based on your desire to combat global warming (which of course is not happening and hasn’t for over a decade). In this religion the current “savior” is a 16 year old. And I guess the devil would be Donald Trump after pulling the United States out of the Paris Climate treaty. Awwww.

Also at the summit, others were not happy with the slow progress have decided to take action:

Greenpeace activists scaled the planned venue and set off flares before chaining themselves to the building in protest at the “slowness” of global climate action. The 28-strong group managed to climb the building by using the ladder of an old fire truck and has enough food to last for two days, according to Greenpeace spokesman Mark Breddy.

Isn’t setting off flares a bad thing for the environment?

But here is the best part:

The facade scaled by the activists is made of restored wooden window frames from renovation or demolition sites around Europe. Its roof is covered with solar panels and the building recycles rain water.

Maybe we could deploy Tackleberry to take care of these folks:

Tackleberry: Sir you need to come down from there!

Dennis Prager: Wisdom Begins With The Fear of God

Daniel Greenfield: Get High, Fix Race Relations in the People's Republic of Evanston