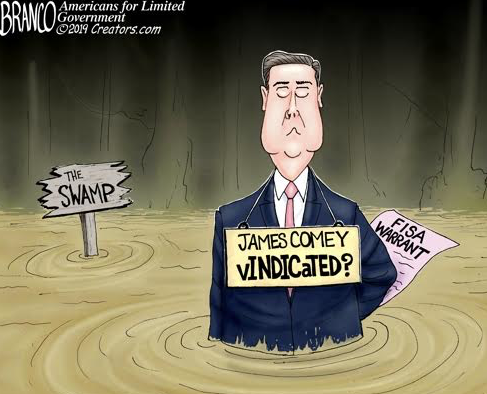 For very different reasons than they claim, I agree with Democrats that America is facing a Constitutional crisis.  I also agree there’s been an outrageous obstruction of justice.  My difference with the Democrats is that I don’t believe Trump’s the problem, they are.

Democrats have weaponized impeachment for no reason other than removing a president they don’t like.  It’s prosecutorial abuse at its worst, and anywhere else in the world we’d call it what it is, an attempted coup. You have to wonder just how far they’re willing to go.

Judging by the threats coming from Democrats they may be willing to go too far.  Pelosi claims Donald Trump’s Presidency jeopardizes the integrity of next year’s elections.  Jerold Nadler, Democrat Chair of the House Judiciary Committee, has also thrown out the presumption of innocence and claims if Trump isn’t removed from office, he’ll undoubtedly use election fraud to win.  Al Green, a Democrat Congressman from Texas has said that ifthisimpeachment doesn’t work, they’ll keep impeaching, presumably, until they find one that does.

It’s dangerous to our Republic that Democrats are already setting up a Trump re-election victory as illegitimate. They don’t seem to understand that the thing about coups is that once accepted as part of the political process, coups tend to happen over and over as each side takes turns deposing the other.

The Republican leader in the House has already announced that should Biden win the White House, Republicans will “investigate, poke, and probe Biden and his son.” Meanwhile, Lindsey Graham, Chairman of the Senate Judiciary Committee, has announced an inquest into Biden-related matters.

Democrats should have learned “you better be careful what you wish for.” During the Obama years, Senate Leader Harry Reid, frustrated over Republicans blocking Obama’s judicial appointees, jettisoned the 60-vote requirement to close debate and take up the confirmation of Obama’s judges. It’s a move that’s come back to bite Democrats because the now Republican majority uses the same “nuclear option” to approve dozens of Trump appointees – including 2 Supreme Court Justices.

So why don’t Democrats believe Republicans will use impeachment to dump the next Democrat president if given the chance?

Could it be that once they regain the White House, Democrats intend to stack the election deck so heavily in their own favor Republicans never get the chance to win another national election?

That’s the groundwork they seem to be laying as they advocate for looser border restrictions and easy citizenship for illegal immigrants – now 20 million and counting.  The first law House Democrats passed this year, while packaged as election reform, actually restricted free speech and eliminated key protections against voter fraud – both “reforms” that work in their favor at the polls. And then there’s the huge expansion in entitlement programs proposed by Democrats running for president. Does anyone seriously believe those proposals aren’t designed to forever lock the beneficiaries of entitlements into the Democrat coalition?

Democrats were never supposed to lose in 2016 and now they can’t forgive Trump. In their minds, he’s the only thing that stands between them and absolute political control.

Oh sure, they say it’s because they don’t like his demeaning the office, his tweets, his crudeness, his ego. Not that they ever complained about the narcissism of the foul-mouthed LBJ or the sexual harassment committed by Clinton, or the womanizing of Kennedy.

And yes, they despise Trump for standing between them and the Green New Deal, free college, and Medicare-For-All. They can’t believe Trump undid with the sweep of a pen so many of Obama’s anti-business regulations and anti-military defense cuts.

But more than their policy differences, Democrats hate that Trump isn’t one of them.He’s not a career politician; he’s a real estate developer. He says exactly what he’s thinking, he doesn’t care for their “political traditions,” and he’s intent on “draining their DC swamp.” Worse than all that, he keeps his promises — create jobs, cut taxes, renegotiate trade deals, build a wall, beat ISIS, move the U.S. embassy to Jerusalem.  It’s not that every other politician hasn’t made similar, and often the very same promises. What galls them is that in every case, Trump has actually worked to keep his promises.

The left doesn’t like Donald Trump because he believes Americans should have the freedom to care for themselves, make their own decisions.  The left believes only government elites should make those decisions and Donald Trump is standing in their way.

But Americans elected Donald Trump exactly because they didn’t trust the left to run their lives. By 2016, Obama and the Democrats had driven many Americans to a boiling point. Now, this phony Democrat impeachment is driving up the pressure. You sense it in conversations and see it on social media. You see it in the hardening polarization that’s fueling disharmony and distrust between Americans.

The question is this: how far is the left willing to go to strip our nation of those values, impose their socialist ideology, and take our freedom? A very large number of Americans aren’t inclined to stand by and watch quietly forever.  Another problem with coups is they often lead to civil war. I pray we won’t ever face another one. The last one cost 600,000 American lives.

Still, you can’t help but wonder how far these leftists are going to push it. For Pelosi and the other leaders of the Democrat Party, too far may not be far enough.

Clare M. Lopez: Who's Trying to Wreck the US-Saudi Relationship?