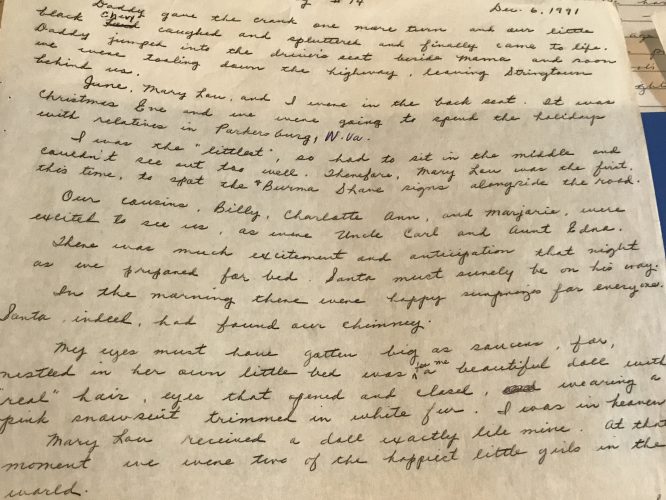 Recently I was visiting my Mom and we were talking about our mutual love of reading and writing. As she often does, she brought out her folder of things she has written for me to look at. She wrote stories about everything – her childhood, family, her children etc. The ones she wrote about her childhood are particularly interesting to me. She and her siblings grew up in West Virginia during the Great Depression. On those pages are the real life stories of the times she lived in close to 9 decades ago. In our current world of technological marvels and social media, we cannot possibly imagine what those days of toil and struggle must have been like.

I came across a short story she wrote in 1991 that I had not seen before. It is a Christmas memory from her youth (the year is unknown but would have been sometime in the 1930’s). With her permission, I now share it with you:

Daddy gave the crank one more turn and our little black Chevy coughed and sputtered and finally came to life. Daddy jumped into the driver’s seat beside Mama and soon we were riding down the highway, leaving Stringtown behind us. 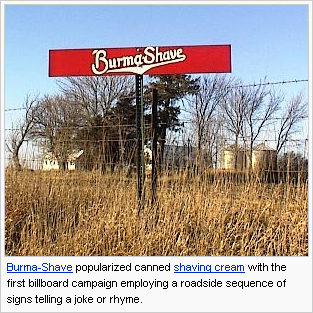 June, Mary Lou, and I were in the back seat. It was Christmas Eve and we were going to spend the holidays with relatives in Parkersburg, WV. I was the “littlest”, so had to sit in the middle and couldn’t see out too well. Therefore, Mary Lou was the first, this time, to spot the *Burma Shave signs alongside the road.

Our cousins, Billy, Charlotte Ann, and Marjarie, were excited to see us, as were Uncle Carl and Aunt Edna.

There was much excitement and anticipation that night as we prepared for bed. Santa must surely be on his way.

In the morning there were happy surprises for everyone. Santa, indeed, had found our chimney.

My eyes must have gotten big as saucers, for, nestled in her own little bed, for me, was a beautiful doll with “real” hair, eyes that opened and closed, wearing a pink snowsuit trimmed in white fur. I was in heaven.

Mary Lou received a doll exactly like mine. At that moment we were two of the happiest little girls in the world.

I’ve often wondered, how did Santa Claus know where we were that year?