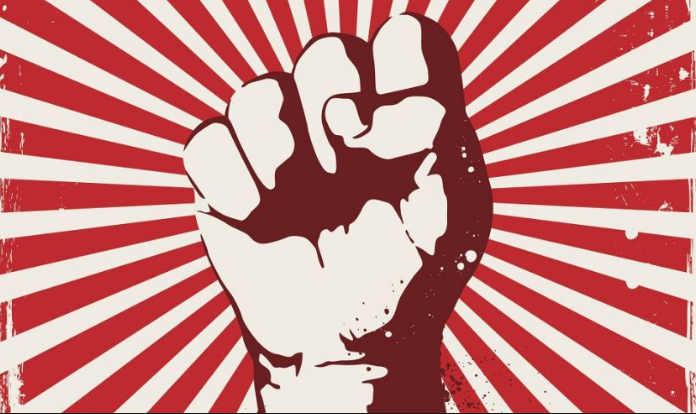 First, we were told what to say and what we could not say – unless we “wanted to get in trouble.” Anything against the regime and system, or the government’s policies would have been punishable: at first by extreme ostracism, job relegation or firing, then by imprisonment or worse. Words of protest against any members of the Party or any public display of disapproval would have been met with strictest public reprobation.

Second, in school, we had books which taught us pre-approved “common core,” which is to say we learned about the scientists favored by the regime and artists who extolled it. We were also taught about how evil, corrupt, dishonest capitalism was. A money-making capitalist was described as the epitome of all evil, the oppressor of all humanity. The ubiquitous motto on notice-boards, billboards and in classrooms was the globalist: “Proletariat of the world, unite!” and “With Soviet Union forever!” and some other illogical sayings, such as “Through war to peace!” and “With socialism to glittering tomorrows!” Propaganda is lies everyone must believe in.

Third, we had a government-mandated healthcare. You could not choose your doctor, he or she was allotted and allocated by the government, as was the degree of care you received. Waiting in line for 5 hours was normal and common. Of course, if you brought some bribe (usually alcohol, chocolates, a 100-bill to the nurse to pass on to the doctor) you were called upon earlier… Otherwise, you may also have had to “serve your turn” for the next day. There was no rush because everyone was paid the same regardless of how fast or slow they worked or what they did. Lawsuits, there were none because everything was run by the government and, as you know, government has (legal) immunity.

This government-mandated healthcare was also present in schools and from very early childhood. Inoculations and examinations were compulsory. We were all given fluoride pills from age 6 to make our teeth grow straight (or so they said) and the teacher would carefully observe that we swallowed them… I guess there is nothing wrong with that – except that if the government told you to take cyanide, you would have to as well. No wonder so many Eastern Block athletes cheated by taking steroids – we were all told to “toe the line,” as all our parents did too. (Coincidentally, that is the exact same phrase Chuck Shumer used about Chairman Nunez today: he should “toe the line.” Sad.)

Next, about the lines: the government mandate was not limited to healthcare. The country was run in the “most efficient way” from the center. This “center” directed businesses how much they could produce and what they could build. As there was no competition, there was no great need for advertising: the fronts of buildings and stores remained shabby and unattractive. Of course, there were grand reconstruction projects, highway building, railroads… One wonders though, as all these projects were grand and great on paper – but the infrastructure everywhere was that of a third world country. A typical “socialist work brigade” consisted of five men leaning on their shovels, spitting and smoking, sometimes drinking, chatting about how horrible life was, while the sixth was digging the ditch. Why should you work if you were paid your minimum wage by the hour no matter what you did? Makes sense, right?

We had 2 official TV channels: one for the news, the other for “intellectual” programs, such as shows about nature and government approved movies. Every kennel of an apartment in our shabby commie blocks of flats was equipped with a wired radio playing one official station. At the time, we had only landlines, and all of them could have been intercepted at any time.

Police was a branch of the Secret Police and if you have ever said anything against the government, you were sure to have had a file with them. What we call NSA today was simply part of the police then – and you had no right to ask any questions. Only they did.

We could not travel out of the country but anyone from the communist block could move in at any time. So we had students from Vietnam, Hungary, East Germany, here and there Greece, whose socialist government was always pro-communist everywhere… Naturally, we had no say in the matter either.

Russians were everywhere. They had their own lines of stores and schools where we could not go, even though we were taught Russian from early childhood and told it was our “first language” – not “mother tongue” but we were expected to speak it like native speakers. I was astounded when I recently read that Obama’s parents met in a Russian language class in Hawaii… Who on God’s green Earth would voluntarily attend a Russian language class?!

Russian “Red Army” was omnipresent, ruining beautiful forests, cutting mountains for nuclear missiles (literally, cutting tops off mountains – I witnessed this personally), driving their tanks through the city just to intimidate us… and intimidate us they did. If you think of the English being compulsorily “quartered” during the Revolutionary War, it was the same with the Russians.

I could go on and on. What matters to me is that you beware of the similarities in our Great Country today. Interestingly, you can suffer physically, you can be deprived of food and be relegated to some minimal job not worthy of your intellect… but what really gets you in the end is that you are unable to say what you think or express yourself in any other way. All art had to serve the regime. It had to be – how shall I put it? – painted like that famous portrait of Obama we have seen in 2009: standing out in bright colors, looking down on you, making you feel small, screaming: “Toe the line!”

Before long, when you cannot freely speak, you will realize that you cannot freely think either. You are forbidden to speak, to express yourself, to think for yourself! You have to think and say as you are told. That is what is truly inhumane about socialism. HA! Even a dog won’t be told when to bark and how loud. But when you live in socialism, you are less than a dog – you are allowed to “toe the line” and wiggle your tail – when they tell you to.

(From Editor: This article was originally published in 2017.)