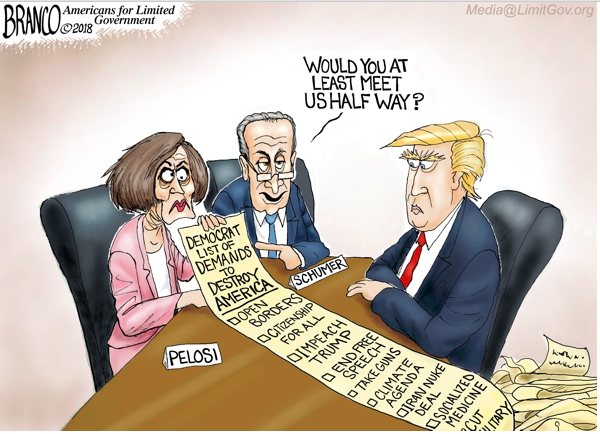 We’re surrounded. Everywhere we turn we see the adversaries of freedom, reason, and truth.  It’s both political and cultural.

TV news isn’t news at all.  It’s commentary pretending to be news.  It’s a metaphor for hypocrisy, and its real purpose is to cause conservatives to reconsider our values and beliefs in the worst possible light.

Look at the magazine racks.  On every slick cover you’ll find people who mostly detest us for our beliefs and our values. Clearly they are not our friends.

Most TV shows start with a kind of centrist bent, but eventually turn as the seasons progress to become propaganda vehicles for far-left sentiment.  By the end, it’s almost always the leftist whose made to look mainstream and the conservative who is portrayed as hateful and mean spirited.

Madam Secretary started as a kind of fund look at the Secretary of State’s job.  But once she became president, she made Obama look like a moderate.  And, as an example of reality imitating art, so now do the rest of the Democrats running for president.

But entertainment is just one form of indoctrination we face. Another is our kids’ schools; where they spend most of their time, where they learn how to think and view the world from trusted adults and peers.

Except their teachers are no longer trustworthy and their peers don’t know any better.  The teachers’ unions the central mission is to make our schools the best work places they can be rather than the best places to find truth, reason, learning, and beauty.

Today, schools teach that science is everything and faith is nothing; and yet science has nothing to do with gender.   DNA is apparently a social invention.  Boys and girls are the same, gender is a matter of personal choice, and boys who identify as girls should shower with girls.

In economics, students are taught that the way to lift up one group is to tear all the others down.  They’re taught that those who prefer government to freedom are just and noble; and those who believe in private property and economic justice are the enemy.

And then there’s the climate change brainwashing.  Students learn their parents and grandparents have destroyed the earth … that past generations of mostly Americans are responsible for planetary demise … that if we don’t substitute freedom for government control, then in 12 years or less Miami — and much of the rest of America – will be under water.  We are doomed. Never mind their climate hero, Al Gore, has made the same flawed and failed predictions for decades.

Schools are also teaching a cockeyed version of America’s history.  America was born with the original sins of racism, sexism, and xenophobia and continues to suffer from those sins today.  And in their secular world-view, there is no redemption — not without tearing our society and our economy down and rebuilding on a new foundation that denies freedom and puts government in charge.

Sure, Abe Lincoln and Dwight Eisenhower were decent presidents, but let’s not mention they were Republicans.  Ice-T, 50 Cent, and LL Cool J might be talented hip hop artists, but we can never acknowledge their Republican leanings.  They celebrate Eldridge Cleaver, the Marxist radical who led the Black Panther Party in the 60s, but don’t admit he’d become a conservative Republican by the 80’s.

Our kids can’t tell you why the Declaration of Independence was important, the essential concepts of America’s Constitution, or the immense carnage and massive death caused by Communist regimes in other countries; but they can talk ad nauseam and with no knowledge at all about America’s racist roots.

Our country is slowly removing all signs of our history. Bob Hope’s name has been erased from the Hollywood/Burbank airport.  They’re trying the same thing at Orange County with John Wayne’s name.  Memorials and statues named after America’s founders are being torn down because they owned slaves or failed to adequately resist slavery.

Even more troubling, our kids are learning that those who disagree with the left’s prevailing wisdom are either evil or ignorant, and must be made to submit – by force of government if necessary.

Two Muslim anti-semites who have nothing good to say about our country, our history, or our traditional values are helping lead the charge against us from inside the House of Representatives.  They’re aided by a huge number of their fellow Democrats.

We are surrounded, politically and culturally.  And every day our fight gets harder, we seem to lose ground.  We will likely suffer more losses before those Americans who oppose us wake up and overthrow their leftist leaders.

But if we persist in the right, and defend our values with reasoned arguments, then eventually we’ll rise.  It will happen because the one certain outcome should the left win and take control is their failure.

History tells us the left must fail. Failure is their legacy.  Socialism doesn’t work.  It never has.