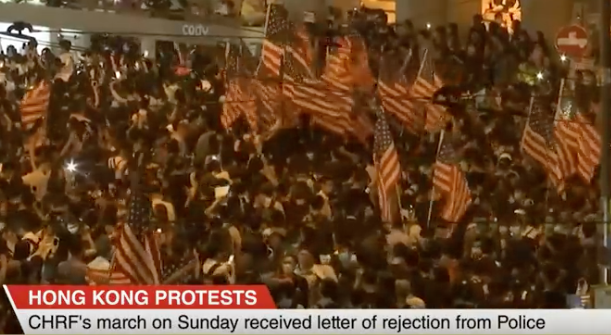 If you’ve been watching the riots in Hong Kong you will have noticed a couple of very important things.

First, China broke a promise to the people of Hong Kong and the United Kingdom that Hong Kong would retain it’s autonomous status for at least 50 years after the British turned Hong Kong over to the mainland.

The communist regime violated the “one country, two systems” agreement by blocking the election of pro-democracy legislators, kidnapped and “disappeared” a number of its political opponents, and censored writers and artists.

The 1,200 member committee that elects Hong Kong’s leader is a pro-Beijing assembly chosen by just 6% of eligible voters.

Is anyone really surprised after 70 years of watching Communist deceit and betrayal?

Another thing you might notice is that Hong Kong teens and twenty-somethings are standing up to police and soldiers with little more than sticks, flags, and a song.  Hong Kong banned guns for everyone but their own government thugs.  So the protesters protect themselves with sticks, they carry American flags, and they sing America’s national anthem.  The same anthem Colin Kaepernick and his NFL buddies take a knee for; the same anthem Nike betrayed when they sided with Kaepernick to discontinue their Betsy-Ross-themed shoe design.

Isn’t it interesting that while Democrats here in the United States denigrate our flag and the values it stands for in their quest to install a socialist as president, people on the other side of the world are risking everything to be free from their socialist regime and holding high the red, white, and blue?

This is as they say a teaching moment.  We have the chance to learn from teens and twenty-somethings on the other side of the world that freedom is worth fighting and dying for.  Individual rights, private property, and personal dignity are all worth the risk.

Another thing we should learn is the importance of our 2nd Amendment; don’t give up your guns to the government.  The protesters are battling armed soldiers with sticks.  Anyone think that’s going to turn out well?

Lots of people think even if Democrats win, these things won’t happen – the Senate, or the courts, or the saner members of Congress will stop the worst of their plans. Maybe.  But they can still do lots of damage by taking control of the regulatory state, appointing leftist judges, and gaining the levers of executive action.

The natural, inevitable end of socialism is tyranny.  That’s so because at the root of socialist ideology is the notion that you don’t own the result of your own work, creativity, or investment. When they take that, they take your ability to achieve and any control you have over your own future.

A win for any of the Democrats running for president will take America down a dark path of socialism and hopelessness.  It’s the same place China wants to take Hong Kong.  The kids of Hong Kong are showing us that freedom and hope, once you have them, don’t die easy.