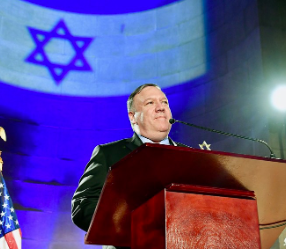 U.S. Secretary of State, Mike Pompeo, announced on November 18, that he was reversing a longstanding and offensive State Department legal opinion that Israelis living in Judea & Samaria were there illegally.

A brief historical review of US policy on the legality of what are called “settlements” has, according to Pompeo, “been inconsistent over decades.”

In 1978, the Carter administration decided that the establishment of Jewish civilian homes was inconsistent with international law but, three years later, President Reagan reversed that stance.

Although much of the international diplomatic community, based at the biased United Nations and in the compliant European Union, were advancing the false notion that Jews living in Judea & Samaria were inherently in breach of international law, a close examination of such laws both civil and military make a mockery of this project designed to advance a Palestinian cause and at a cost to Israeli rights and legitimacy.

The final act of betrayal was Obama’s Israeli back-stabbing when he enabled the UN Security Council to pass UN Resolution 2334 in December 2016 which declared that settlement activity constituted a “flagrant violation”of international law and had “no legal validity.”

The thought that Jews, desiring to live in their ancient land of Judea, have no legal right to be there is morally, legally, historically, immoral and abhorrent. It is also deeply and anti-semitically offensive.

Pompeo’s declaration reverses Obama’s final act of Israeli back-stabbing. His position is sure to be challenged.

Pompeo’s statement resulted from a year-long review of international law by the State Department’s legal office and after consultations with various overseas governments to hear their opinions.

Israel’s Prime Minister, Benjamin Netanyahu, greeted the Secretary of State’s announcement by saying, “This policy reflects a historical truth – that the Jewish people are not foreign colonialists in Judea & Samaria. In fact, we are called Jews because we are the people of Judea.”

The State Department’s position will bring truth and clarity, two missing virtues, to the fog of smoke and mirrors that have been allowed to be reflected onto the Israel-Palestinian conflict  by many in the international community who sided with the aggressive, rejectionist, divided Palestinian camp, a camp that has rejected any permanent peace with Israel going back to Yasser Arafat deceptively signing an agreement with Israel on Bill Clinton’s White House lawn in 1993. He returned from his enforced exile in Tunis to reopen a bloody war of terror and annihilation against Jews and the Jewish State in what became known as the first and second Intifadas.

I know. I became the co-founder of the Netanya Terror Victims Organization when his suicide bombers, car bombers and gunmen brought their terrorist war into my hometown of Netanya, killing dozens, injuring hundreds, of my fellow citizens.

It is time for some historical truth.

Immediately upon the United Nations voting on the establishment on a National Homeland for the Jewish People in Israel, Arab armies launched a war of annihilation against the nascent and defenseless state.

The Jordanian army crossed the River Jordan as part of that war of aggression against the newly-born State of Israel. They captured much of Judea & Samaria and parts of Jerusalem, including the Old City.

During the period 1948 to 1967, they occupied what they called “the West Bank,”meaning the west bank of the River Jordan.

Then in 1967, Arab nations decided to advance the annihilation of the Jewish state to the next phase by launching yet another war of aggression. Jordan joined in that battle expecting to progress deeper into Israel.  To their shock, they discovered a resolute Jewish army determined to defend themselves with might and resolution. The result was that the Jordanian army was reeled back over the Jordan River, the territories of Judea & Samaria were regained by Israel, and Jerusalem was once again liberated by the Israeli army.

According to the laws of armed conflict, if a nation, fighting a defensive war (Israel) against an aggressive nation (Jordan), captures territory that is essential for its future defense and security, it is permitted to retain such land pending an acceptable, permanent, and guaranteed peace agreement between the two sides.

Notice nowhere in this strategic issue does the name “Palestine” appear.

Palestine only truly began to be promoted by the Arab nations with the realization that they were incapable of defeating Israel through conventional warfare.

The advent of the next stage of their attempt to make Israel disappear came with the emergence of an Egyptian-born revolutionary called Yasser Arafat who wrapped himself in the mantle of Palestine.

Arafat emerged from the nurturing and indoctrination of a refugee from Nazi Germany, namely Haj Amin al-Husseini, who had served with Adolph Hitler to develop the strategy for the Final Solution to the Jewish Problem in the Middle East.

Al-Husseini had led bloody riots against Jews in Jerusalem, pre-state Palestine, even in Iraq in the deadly anti-Jewish pogroms known as “the Farhud,”before fleeing the British and escaping to Berlin and joined with Hitler. Al-Husseini recruited and trained Muslim troops under the command of their Nazi officers.

The advance of the Russian army into Berlin caused the Arab Jew-hater to flee Germany for Egypt where he was hosted and protected by a close relative of the young Arafat who fell under his influence.

From such hateful and violent beginnings, the Palestinian cause was born. It continues to today. The desire remains the same. The eventual eradication of Israel as the national homeland of the Jewish people.

Despite this animus against Israel, Israel has genuinely attempted to make peace with its neighbors and others further afield in the wider Middle East.

Israel made bold peace agreements with Egypt and Jordan which have held, even though their populations have not been conditioned to accept the presence of Israel in their midst.

It has made agreements and major concessions to the Palestinians that have not been reciprocated in any meaningful and permanent way, not by the PLO-led Palestinian Authority, and certainly not by Hamas, the Muslim Brotherhood chapter of Palestinian society.

Neither side of the Palestinian political divide have conditioned their people to accept and agree to the notion of living in peace, prosperity, and in cooperation with the Jewish State. This, to them, remains an anathema unable to be swallowed.

This is the core, the real obstacle to peace and progress.

Until this basic truth is recognized and accepted by a delusional diplomatic world no progress to peace can be achieved.

It will take decades before a rational and pragmatic Palestinian leadership will emerge, if ever. Until that time, alternatives to a failed two-state notion can be put on hold. The impending Trump Middle East Economic Future plan may concentrate Palestinian minds on building a prosperous society, rather than continuing to incite violence and launch rockets in a vain hope of reducing Israel’s territory and will to survive.

Both Israelis and Palestinians can get on with their lives wherever they are, and let’s see what emerges in the years ahead.

Israelis have no stomach to govern Ramallah, Nablus. Tulkarm. The Gaza Strip.

For Palestinians, the expectation they can march through Israel must die. They have lost the right to demand a state instead of Israel. They will have to adjust to something less than that, different to that. It may be a confederation with other nations. Size will not be important. There are small and very wealthy nations in Europe. Think Monaco. Think Lichtenstein. Think Luxembourg.  There are tiny, wealthy, nations in the Middle East. Think Kuwait. Think Dubai Think Abu Dhabi. Think United Arab Emirates.

Think this, and forget about two-states. That died a long time ago. The Palestinians killed it.

Secretary of State Mike Pompeo’s recent declaration may have launched a process that will take us to a new reality in the Middle East.

Barry Shaw is the International Public Diplomacy Director at the Israel Institute for Strategic Studies.  He is the author of ‘Fighting Hamas, BDS, and Anti-Semitism,’ and ‘1917 From Palestine to the Land of Israel.’

Barry Shaw: Ahead of the Trump Peace Plan, Some Hard Truths