In the seven plus years since the Benghazi attacks, the four Benghazi victims and their family members continue to be insulted by the Democrat Party, their minions and the media. From Hillary’s insensitive statement “What difference at this point does this make?” to D.C. Rep. Eleanor Holmes Norton calling inquiries about Benghazi a “Corpse,” we have experienced hundreds of dim points of ignorance stated about Benghazi.

Well as John Lennon sang, “One thing you can’t hide is when you’re crippled inside.”  It takes a highly honed sense of humor when dealing with the ignorance or evil of idiots. People like Hillary Clinton, or currently Adam Schiff and Nancy Pelosi, are so locked into their agenda that any shred of honesty or character is completely missing from their behavior.

Recently, there was a continuance of inappropriate comments concerning the deaths of Ambassador Stevens, Sean Smith, Tyrone Woods and Glen Doherty.  Former Ambassador to Ukraine, Marie Yovanovitch, testifying before the House Oversight Committee, evoked the four ghosts of Benghazi as part of her testimony at the November 15thpublic House Impeachment Inquiry.

Ms. Yovanovitch, playing the victim, stated in defense of herself at one point during the hearing: 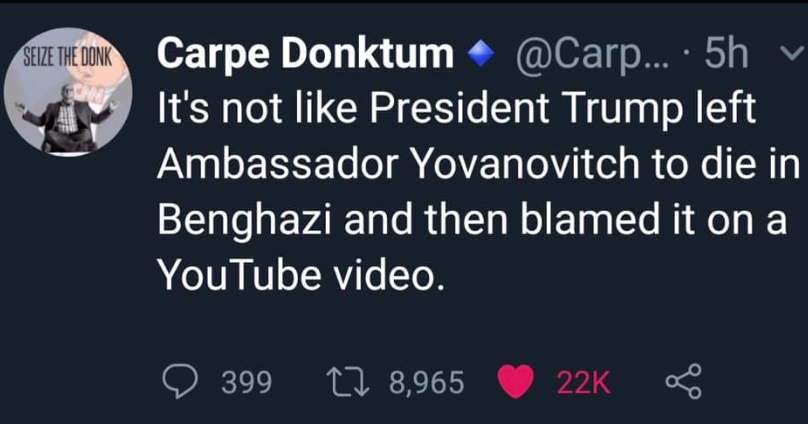 First a correction here, as of September 11thand 12th, 2019, it has been now a little over seven years since the travesty that was Benghazi.  More directly, Ms. Yovanovitch, you are not Chris Stevens, Smith, Doherty or Woods.  None of them are serving as a Senior State Department Fellow at Georgetown University for the study of Diplomacy.  None of the four Benghazi heroes have amassed vast fortunes.

Because of the criminal behavior and purposeful negligence of former President Barack Obama and former Secretary of State Hillary Clinton they are physically unable to pursue the opportunities afforded to you.

True to your statement, Ms. Yovanovitch, the four Benghazi victims are American heroes. What they are not is fodder for a public distillation of your sour grapes over being fired by President Trump. 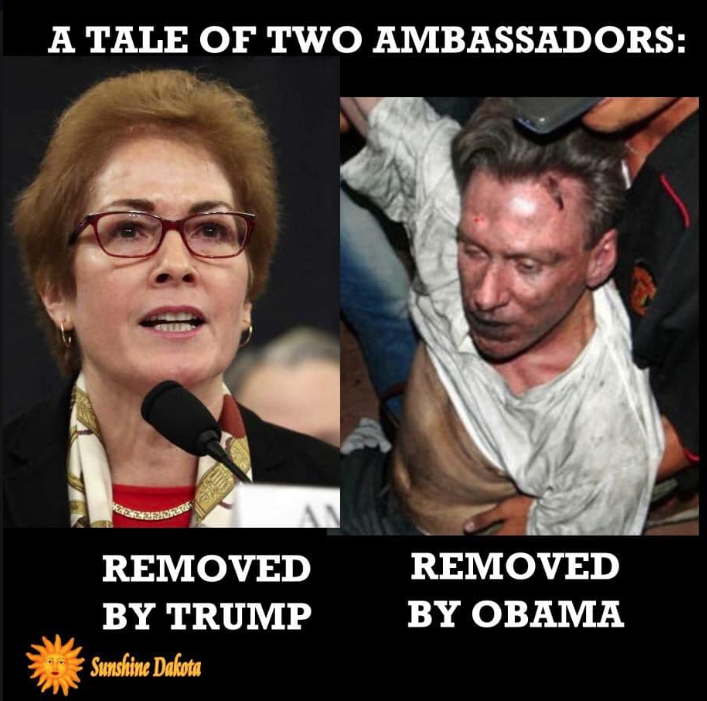 Yovanovitch served as an Ambassador at the pleasure of the President. She was not an elected official. I am truly amazed that members of the United States Congress are so angry over her firing.  Where were those emotions when Ambassador Chris Stevens, Sean Smith, Ty Woods and Glen Doherty were brought home in coffins?  Where was the outrage from the Media?  They never have fully addressed the many crimes of Barack Obama.

President Obama fired all Bush era Ambassadors in December 2008 without a peep from the media. On Obama’s watch an American Ambassador and three fellow patriots were killed in the service of their country. Barely a blip on the screen.  So Adam Schiff and his minions want us to be upset about Ms. Yovanovitch’s dismissal?

Ultimately, what we have with Marie Yovanovitch’s testimony is a Human Resources issue disguised to resemble substantive evidence in what is supposed to be a “serious” impeachment inquiry.  The impeachment process, as it is being currently run, is an insult to the Articles of Impeachment as established by our founding Fathers.

We do not need an investigation into an innocent phone call between two world leaders.  What needs to be investigated is the Obama Administration’s taking advantage of the destabilization of Ukraine in 2014 and the billions of dollars given by the United States to Ukraine.  We need to investigate how inexperienced progeny of government servants came into sweetheart deals in the reconstruction of the country of Ukraine.  That same investigation principle needs to be also applied to high-ranking government officials.  That is the real Collusion story and that is the real criminal element in this nightmarish tale.

All in all, these ‘hearings’ seem like a series of bad horror movies paid for by the American taxpayer. The media is a co-conspirator in this wrap up smear. Repeat lies until they are believed by an uninformed public. The continuing insult is the real lack of accountability and justice in America today, regarding Benghazi and other crimes of the Deep State.