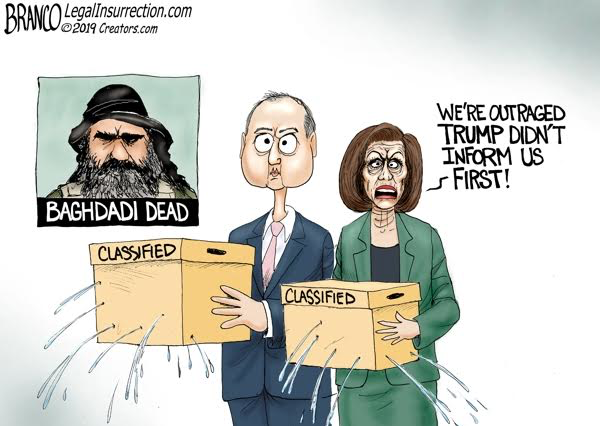 The intensity of society is at a boiling point, with heads exploding on the mainstream media. A media  that has morphed into hypocrites spreading lies and propaganda while weaving spells on the confused and clueless.

I distinctly remember the night that the death of Osama Bin Laden was announced in May 2011.  I was in the aftermath of playing the Blues at a local club.  There was immediate celebration over the death of this unrepentant terrorist. Cheering and jubilation abounded throughout the Double Door Inn.  We were one as Americans.  It didn’t matter that I was not an Obama fan, I celebrated this successful mission by our Special Forces.

When you contrast the response to the death of ISIS Leader, Abu Bakar al-Baghdadi with the  media coverage of the Osama raid you can clearly see that the media and the leftist have embraced their ideology almost as a form of madness.

There is no doubt in my mind that Abu Bakar al-Baghdadi was a monster incarnated in a human form. Literally, he was a murderer, a rapist and a sadist.   Washington Post reporter, Max Boot, wrote an article with a headline defining Baghdadi as an “austere religious scholar.”  Perhaps Mr. Boot, needs to sip that bottle of vintage Jonestown kool-aid as opposed to gulping it down, maybe not.

There has been nothing admirable about ISIS nor anything remotely religious about their behavior. They are unhinged radicals that want to kill everyone that refuses to submit to their barbaric cult.  The deaths of Abu Baka al-Baghdadi and his second in command, Abu Hassan Al-Muhajir, are victories for President Trump in the real war on terror.  The elimination of ISIS is crucial to peace in modern society.

Yet, many members of the media take umbrage with the President when he stated that Baghdadi died like a coward.  Well, when you use your three children as human shields and blow them and yourself up with a strapped on bomb, that fits my definition of cowardice.  So spot on, Mr. President.

President Trump at least demonstrated some decorum by not naming the team responsible for executing the raid on Baghdadi.  Unlike, Presidential hopeful Joe Biden, who in the aftermath of the raid on bin Laden, outed Seal Team Six.  Because of Biden’s loose lips he got Seal Team Six executed in the final flight of the Extortion 17 team.

Does anybody remember Hillary Clinton’s tasteless comments in the aftermath of the death of Qaddafi?

“We came, we saw, he died,” said Clinton.  There was no media outrage there just like there were no recriminations against Joe Biden’s sheer incompetence.

In fact, the American Mainstream Media died an ignoble death many decades ago.  They have been slowly rotting as they lost all objectivity. They became ideologues.  The many scandals and crimes under the Obama Administration were not reported on by the corrupt media.  Everything Obama did was praised by the adoring communist news networks. The adoration continues today.

Unfortunately, there are many people that are still “informed” by the mainstream press.  Do your homework, America.  What we have now is a narrowing view in the news.  A press where opinion is treated as fact and fact is hidden like arcane fiction.

The biggest enemy to America and our freedoms are the corrupt clown media.  A dishonest media that peddles lies and propaganda to undermine our President and our national security. An irresponsible press in recent days outed the team responsible for the Baghdadi mission.  Now Uncle Joe Biden is not the only fool available for public examination.  A hypocritical and incompetent press is a dangerous adversary.

Ultimately, President Trump will survive. Whether blocked by a hostile press, KGB-like members of Congress, or mislead members of the populous, he will continue to make America into a strong nation.

A nation like we have never seen in my lifetime.

Praying for President Trump’s continued success.  In times of great deceit the people will flock to the person speaking the truth.