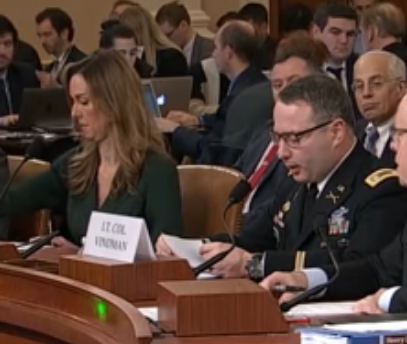 We’re on the third day of the impeachment hearings. It’s becoming like a Herman’s Hermits song: “Second verse, same as the first”.

In the morning session it was Colonel Alex Vindman and Jennifer Williams (who apparently was there as a wall flower considering she was asked few questions).

Devin Nunes opening statement was great as he excoriated the media:

The media, of course, are free to act as Democrat puppets, and they’re free to lurch from the Russia hoax to the Ukraine hoax at the direction of their puppet masters. But they cannot reasonably expect to do so without alienating half the country who voted for the President they’re trying to expel. Americans have learned to recognize fake news when they see it, and if the mainstream press won’t give it to them straight, they’ll go elsewhere to find it—which is exactly what the American people are doing.

Here are the main points from today’s hearing. I focus exclusively on the morning session since the afternoon was another carbon copy.

Probably the funniest moment of the day;

WENSTRUP: You said you respect the chain of command. Did you go to your direct boss, Tim Morrison?

Followed up on by Jim Jordan:

JORDAN: Why didn’t you go directly to your superior with your concerns?

VINDMAN: It was a really busy week. Also the lawyer told me not to talk to anyone else.

JORDAN: And yet you talked to your brother, to George Kent, and a CIA person you won’t name.

You may notice that again there are no concrete facts that indicate criminality on Trump’s part.

The Democrats overall strategy is telling. Basically it is that folks in the intelligent community like Vindman make US Foreign policy. This is what it all boils down to. Trump needs to be impeached because he dares to deviate from the conventional wisdom and exercise his authority as President. Without knowing it, the Democrats are making Trump’s point about the deep state perfectly.

And they are also covering for the Biden’s involvement in all this. I am also noticing they have spent a lot of time trying to knock down the idea that Ukraine interfered in the 2016 election, which we know they did (after all, why would Vindman warn them not to get involved unless there was past experience with it). That tells me there is something there that they want to try and discredit before it is exposed. What do they know that has them scared?

We have several more days of this buffoonery. Lovely. And there’s another Democrat debate tomorrow evening. Incredibly the candidates may look good in comparison to the clowns in the House of Representatives.

I’ll close with a statement from Jim Jordan: “They’ve got nothing. This is scary what these guys are putting the country through.”