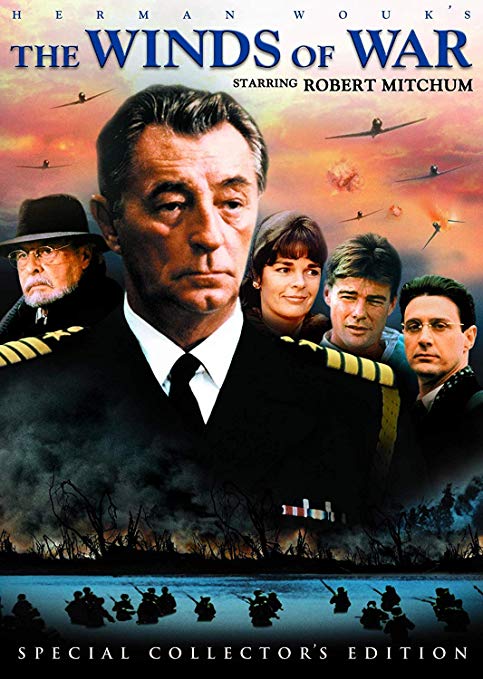 My biggest problem with the impeachment hearings is how much people’s attention is being drawn away from international concerns that are much more serious. The buildup of hatred against Jews in Europe with the burning down of synagogues and in the Middle East Iranian backed rocket attacks on Israel. It reminded me of two books by Herman Wouk I had the opportunity to review for a local newspaper when they came out in the 1970s. The books The Winds of War and War and Remembrance were excellent historical novels about World War Two and the persecution of the Jewish people.

Both books were made into TV Novels in the 1980s and the memory of the video versions of the stories came back to me as I have followed the news in the Middle East. The DVD versions were still available on Amazon, and despite expensive well worth it. My wife and I binged for a two week period and found ourselves deeply touched. Deeply enough that we feel strongly they should be shown again to a generation that looks back on World War Two as no longer worth the study in schools and the persecution of the Jewish people and other groups debatable. There is even a so called comic film out where Hitler is depicted more as a clownish buffoon than the Satanic monster he really was.

The author of the books was also the screen writer for the TV novels and therefore could keep a hold on the purity of the plot lines. A novelization of actual events from 1938 to 1945 they are seen through the eyes of a fictitious family you will believe are real. The family is headed by naval captain Victor “Pug” Henry who becomes a confidante of President Franklyn D. Roosevelt and is sent on missions throughout Europe giving him access to Winston Churchill. Adolph Hitler, Joseph Stalin and many other world leaders. Pug’s two sons also are involved in world events, Warren a Naval pilot in the Pacific and Byron who is anti military but eventually becomes a submarine commander. There is also a daughter, Madeline, who becomes involved in the news media.

Byron is the most interesting as he becomes involved with a Jewish girl, Natalie, who after a rocky romance he marries and they have a child. This becomes intense later as Natalie and the child wind up in a Nazi death camp and the viewer anxiously wants to know what will happen to them. Byron seeks to get their release, but international politics makes it impossible.

In the novels Herman Wouk documents events and conversations with extensive footnotes, however this is enhanced through the films by news reel footage. News reels from the times are used extensively and you are there for the German and Russia takeover of Poland, the Blitz of Western Europe by the Luftwaffe, the bombing of Pearl Harbor, the invasion by allied forces of North Africa, Midway, D-Day and the fall of the German and Japanese empires. 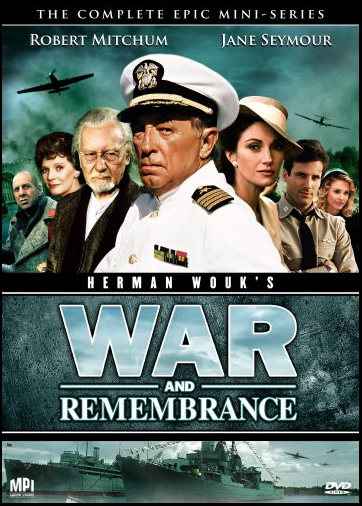 The actors are superb whether portraying Roosevelt, Churchill, Eisenhower, Hitler Stalin or the many advisors and officers around them. However none stand out as well as the fictional characters and Robert Mitchum as “Pug” Henry deserves every possible award an actor can receive. Mitchum’s son Christopher tells the story that before the second novel was filmed producers felt his dad should be replaced as they had a few other roles. However after checking all over Hollywood it was decided that Robert Mitchum was Victor “Pug” Henry and that no one else could do it better.

What is most compelling and horrible is the concentration on Hitler’s “Final Solution” the extermination of all Jews. There is emphasis on the building of the camps and then the way Jews are put to death in gas chambers and their bodies disposed of. The nay sayers about what happened need to see the actual newsreel footage run especially in the second TV novel as it is haunting. Nightmarish.

Once you see these TV Novels you will understand why the people of Israel promise “Never again!”

Emery McClendon: How Big Is Your Dream For America?

Daniel Greenfield: A Coup in Israel