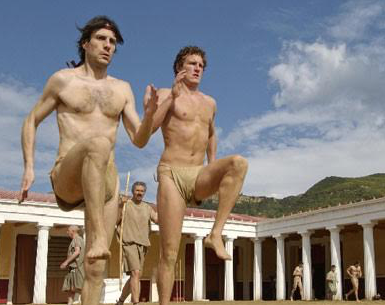 irst off before you read the following please know that though I love sports I am not an athlete. I played some baseball as a kid and in high school and only one thing kept me from being called to the majors. I stunk. My main sport was golf, but here I was mediocre. I am more a bleacher bum.

I address this topic as many pastors and priests love to use sports metaphors in their messages. Usually from something they read or from their own experience.

The New Testament uses a number of athletic metaphors in discussing Christianity, especially in the Pauline epistles and the Epistle to the Hebrews.

The citizens of Greece and Rome and Corinth in Paul’s day flocked to their Olympic games. The athletes would gather from near and far. Many of them stayed in tents, which has led some to believe, that Paul, “the tent-maker”, would have found gainful employment in the Olympic environment.

The noblest citizens of the land were chosen to be judges. They sat on small thrones and dressed in purple, they would start the contests and would judge the winners. They made sure that people competed according to the rules. These athletes would train for 9 months in order to compete in the contests – strict, hard training. They gave up nearly all of their freedom in order to compete and win the prize – a twisted laurel leaf put on their brow and the satisfaction of knowing that they were the very best in their sport. Their names were in scripted in stone. They were esteemed, sung about, and honored by everyone, but it came at a very costly price. Paul very likely got to know many of these athletes and what they went through. Just as likely he attended the games.

When Paul makes all of these allusions to the Olympic games, he’s saying to us that he’s bringing to the Savior and to his Church, the spirit of an athlete.

The metaphor of running a race “with perseverance” appears in Hebrews 12:1,and related metaphors appear in Philippians 2:16, Galatians 2:2, and Galatians 5:7. In 2 Timothy 4:7, Paul writes “I have fought the good fight, I have finished the race, I have kept the faith.”

In 1 Corinthians 9:24–26, written to the city that hosted the Isthmian Games, the metaphor is extended from running to other games, such as boxing, to make the point that winning a prize requires discipline, self-control, and coordinated activity. In 2 Timothy 2:5 the same point is made. These athletic metaphors are also echoed in later Christian writing.

According to Forrest Gump’s mama, “Life is like a box of chocolates. You never know what you’re gonna get.” I say “Life is like sports!” I am not the first to say “life is like sports.” Southern humorist Lewis Grizzard put it this way, “The game of life is a lot like football. You have to tackle your problems, block your fears, and score your points when you get the opportunity.” The legendary coach, Vince Lombardi, expressed the same sentiment. “Football is like life, it requires perseverance, self-denial, hard work sacrifice, dedication and respect for authority.”

Ladies, might prefer Erma Bombeck’s observation on sports. She said, “If a man watches three football games in a row, he should be declared legally dead.”

Listen to these illustrations from Paul: “Do you not know that in a race all the runners run, but only one gets the prize? Run in such a way as to get the prize. Everyone who competes in the games goes into strict training. They do it to get a crown that will not last; but we do it to get a crown that will last forever. Therefore I do not run like a man running aimlessly; I do not fight like a man beating the air.” (1 Corinthians 9:24-26). “I have fought the good fight, I have finished the race, I have kept the faith.” (2 Timothy 4:7).

Remember what that great baseball philosopher Yogi Berra said. “It’s not over til it’s over.”