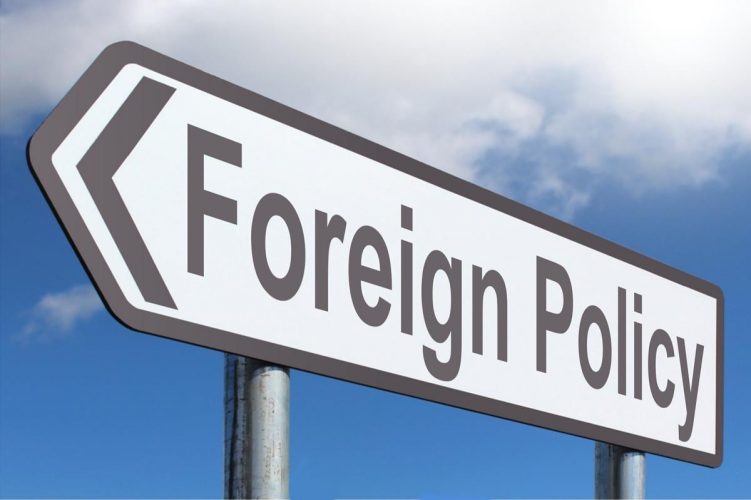 Recently Brit Hume was discussing Trump’s call with the Ukrainian leader and questioned his grasp of foreign policy:

“And he is inexperienced in foreign affairs, so he’s on the phone with some leader, and he has this rambling kind of disconnected conversation in which he says you need to do me a favor and then he mentions some things, and later on, he says we need to investigate and see about the Bidens. Well, maybe he meant that as a quid pro quo, maybe he didn’t.”

Inexperienced? Why that would lead one to surmise that previous administrations were experienced and competent. So let’s take a look at recent foreign policy before and after Trump’s election and see how it stacks up.

First we’ll look at some of the countries/regions we’ve been engaged in:

Russia: It is mind boggling to watch the left’s opposition to Russia these days. Until Trump came along, these folks couldn’t get enough of communism going all the way back to FDR. They protested the Vietnam war (and treated our returning soldiers horribly) sided with them over Reagan and often undermined his efforts in the Cold War. Ted Kennedy (a traitor if there ever was one) even went to Russia behind Reagan’s back. I guess if your callous enough to let a woman drown in your car you wouldn’t have any problem selling out your country. Btw, I have to laugh at the left’s criticizing Trump as being favorable to dictators. Are you kidding me?? The Democrats have historically loved authoritarians! From Gorbachev to Castro to Chavez the Democrats have always admired and envied dictators.

NATO: For a long time now NATO has existed because America was footing most of the bill (financially and militarily). Along comes Trump who demands *gasp* that the other countries contribute their fair share. Oh the horrors of such a thought! He even threatened to pull out, which had Neo-cons needing the vapors. They said it would destroy the alliance against Russian aggression. Really? Seems to me that pretty much one man stood alone against Russia. That was Ronald Reagan. Isn’t it interesting how the wizards of smart never consider trying anything different.

China: For over 2 decades we have been at a severe disadvantage in our trade with China. American workers have been hit hard. Romney was correct when he said that they manipulate their currency to maintain their superiority. As for our own citizens, Obama lamented that those jobs shipped overseas weren’t coming back. When Trump promised to change that in 2016, Obama mocked him asking if he was going to wave a magic wand. Well apparently he did because the jobs ARE coming back. Trump has also gambled his success on winning a trade war with China. While the final outcome has not been determined, I wouldn’t bet against him.

But out biggest catastrophe has been in the Middle East:

Iran: This has pretty much been a disaster since the 70’s and the Carter administration. I knew that Khomeini came to power during this time but until I was doing research for this article I did not know that he had directly contacted the Carter White House for help, which led to Carter persuading the Shah to step down. Wow. Gee I am sure the left of that day was upset by our intervention and regime change. Just think of all the misery that has been caused by the Iranian Revolution. Under Obama the sanctions were continued, then lifted as part of the nuclear deal (which, as you may recall, had some money involved with it). When Trump came in, he re-started the sanctions and pulled out of the deal.

Isis: Obama called them a JV squad. His underestimating them lead to a powerful army that killed and destroyed. Nadia Murad wrote about their brutality in her book “The Last Girl”. They took over large swaths of land and oil, essentially a terrorist state. In 2016 Trump promised to destroy ISIS. He has kept that promise.

Iraq: If there was a specific moment when the Republican Establishment turned against Trump it was when he criticized former President Bush for the war in Iraq during the 2016 primaries. This was just too much for perpetual war and interventionists like Max Boot and Bill Kristol. I imagine historians will be debating the merits of that war a century from now. But the folks behind it’s implementation made a lot of mistakes. To their credit they did salvage it at least in the short term with the surge and the capture of Saddam. But the post-war period has seen Iran gain more influence in the region causing new headaches. Trumps foreign policy view is to stay out of it. Other than fighting and destroying ISIS, he has pretty much been consistent.

Libya: Gaddafi was captured and killed by Muslim extremists whom the Obama administration thought were linked to the rebels in Syria. In reality they had ties to Al-Qaeda and many of them later joined ISIS. Yes Gaddafi was a bad man but had been pretty quiet after Reagan bombed his compound 3 decades ago. Since his death extreme Islamic factions have taken control of Libya.

Syria: It’s still perplexing to try and figure out exactly what we were doing in Syria. Obama drew a red line then withdrew it. We supported the rebels against Assad but some of these rebels weren’t our allies. It was hard to tell who was who. The whole thing degenerated into chaos. And the attempt to remove Assad failed. Trump is in the process of getting us out of that country.

Benghazi: An American ambassador was tortured, killed and dragged through the streets. But it wasn’t our fault screamed Hillary. No….it was a video that caused it. Can you imagine if Trump offered this pathetic excuse.

Israel: During the eight years of Obama, Israel was treated like an enemy not an ally. Obama even meddled in their elections, trying to get Netanyahu defeated. Talk about collusion! Since taking office Trump has been a solid ally of Israel and recognized Jerusalem as the capital of Israel (something previous administrations promised to do but just never happened to get around to).

The Paris Climate Accord: This was a ridiculous treaty to begin with. This week we officially pulled out. The whole climate change (ie global warming) scare is a hoax used to strengthen the grip of government over the populace. Trump was right to pull America out from it.

The bottom line in all foreign policy decisions over the last 50 years (with the exception of Ronald Reagan and now Trump) has been to perpetuate war (each administration picking and choosing when, where and sides) and advance the cause of globalism (at the expense of the American worker). Back in 2017 Stephen Walt wrote a piece critiquing the Obama’s foreign policy and said something very interesting. While it is about Obama, this could be applied to just about any administration since the end of WW2:

What explains these various failures? Two things, primarily. First, although Obama took office intending to re-engineer America’s relationship with the world, he was quickly co-opted by the existing national security establishment and bought into its mantra that the United States as the “indispensable power” must take the lead in promoting a rules-based world order centered on free markets, democracy, and human rights. Here Obama did face a real dilemma: The Democratic Party’s foreign-policy apparatus was dominated by dedicated liberal crusaders, which meant there was hardly anyone Obama could appoint who agreed wholeheartedly with his foreign-policy instincts. Once he selected people like Hillary Clinton, Jim Steinberg, Susan Rice, Tom Donilon, Samantha Power, and Anne-Marie Slaughter — along with veteran insiders like Robert Gates, John Brennan, and Dennis Ross — the die was cast. This group had plenty of disagreements, to be sure, but they were all ardent believers in U.S. “global leadership,” and they rarely saw an international issue they didn’t think the United States should play a major role in solving.

Eisenhower sounded the warning bells on this in his farewell address:

“In the councils of government, we must guard against the acquisition of unwarranted influence, whether sought or unsought, by the military–industrial complex. The potential for the disastrous rise of misplaced power exists, and will persist. We must never let the weight of this combination endanger our liberties or democratic processes. We should take nothing for granted. Only an alert and knowledgeable citizenry can compel the proper meshing of the huge industrial and military machinery of defense with our peaceful methods and goals so that security and liberty may prosper together.”

I would say he was right. Presidents, at most, have 8 years in office. The deep state is there for a generation or more. But Trump is a major threat to them like they have never seen before. He has come along and said “ENOUGH”! He is putting America and the interest of American workers first while keeping us out of foreign battles that have taken the lives of so many in the past. It’s refreshing and smart. And if that’s what Brit Hume means by “inexperienced”, I want a lot more of it.

Daniel Greenfield: Why the 'Woke' Corporations Back China