America’s story is an ongoing adventure full of challenge and success. Sometimes we’ve risen without having first to sink.  Other times we’ve had to hit bottom before moving up.  The civil war and great depression.

Today, we find ourselves in a particularly downbeat political moment. Present are all the ingredients required for massive social upheaval — rancor, hate, accusation, and extreme polarization.

Exhibit one is Adam Schiffand the House Intelligence Committee he chairs.  The committee under the leadership of this hysteric is leading the impeachment inquiry. I call it an inquiry even though the House never actually voted to launch such an effort … members of Congress not on the committee are prohibited from observing the proceedings … the media are barred from the hearings or even receiving transcripts of hearings … Republicans on the committee are barred from calling their own witnesses … and only Democrats are allowed to leak testimony from the hearings. 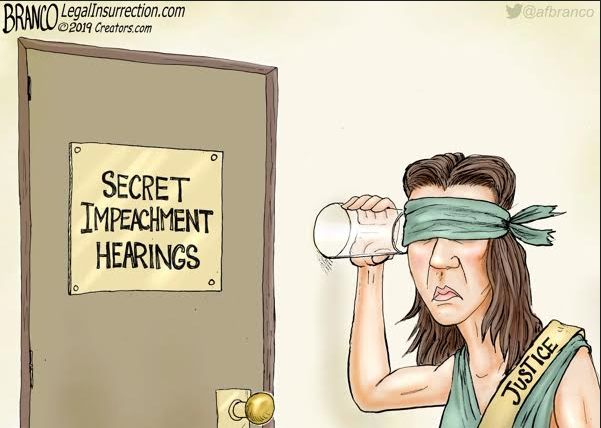 Trump recently called the inquiry a political lynching because it is clearly a kangaroo court guided by mob hysterics rather than due process. Democrats criticized him with much sound and fury over the word “lynching.”  But that’s exactly the same word Joe Biden used to describe the Clinton impeachment. And unlike the transparency and due process in that impeachment, the secrecy and duplicity in this one makes the term lynching at least understandable if not entirely appropriate.

You’ll probably remember Adam Schiff as the same Democrat who claimed he had absolute proof of collusion between Russia and the president during the Mueller investigation.  He never produced the evidence and the Mueller report said there was none.  He quickly pivoted to obstruction as the reason to impeach.  Turns out he couldn’t produce any evidence of that allegation either.  (Maybe the dog ate it.)

Schiff also faked a conversation between Trump and the president of Ukraine so it would be recorded into the congressional record and reported by the press. He has yet to apologize for that false reading instead suggesting everyone knew it was a parody.  Everyone except, Congressman, for those who didn’t.

It’s one thing to meet with a member of the deep state who had a partisan gripe with Trump.  It’s all together different to coach such a person to engineer a complaint that’s as damning to the president as possible.

It’s probably the biggest reason Schiff no longer wants the whistleblower to appear in the inquiry –  Schiff’s not interested in answering the question what did he know and when did he know it.

But rather than resign – or even declare publicly his conflict – and recuse himself form the process, Schiff carries on … in secret … making wild charges publicly, but without public scrutiny.

Maybe Schiff should at least consider his oath of office.  Read and reread the part that says, “I do solemnly swear (or affirm) that I will support and defend the Constitution of the United States against all enemies, foreign and domestic; that I will bear true faith and allegiance to the same …”

What’s it look like to bear TRUE FAITH and allegiance to the Constitution? Mr. Schiff has shown us clearly what it does NOT look like.  And he’s not alone.  An entire political party — with a following that includes nearly half the nation — wants to veto an election just because the other half won it.  And they’re willing to do almost anything to make that happen.  No lie is too great, no false allegation beyond the pale, no contrivance over the top.

Mr. Schiff and his Democrat colleagues have betrayed their oaths. Their actions dishonor the institution we know as the House of Representatives; the same House that moved to end slavery with the 13th Amendment … the House in which two World Wars were declared that saved freedom on earth …  the House where laws were passed that dispatched tens of thousands of American men and women around the world to extend and protect that freedom … the House where women won the right to vote … the House where equal rights were promoted and defended … the House where men and women of passionate belief over more than two centuries each gave a little so Americans would gain a lot.

I’m talking here about both Republicans and Democrats …  men like Tip O’Neil, the Democrat Speaker, who competed fairly and reached honest agreement with Republicans like Ronald Reagan.

The sad truth is that Democrats like Mr. Schiff would understand none of this because they are cowards, liars, and worse; corrupt politicians who put politics above country; and themselves above their countrymen.

As we have with past challenges, Americans will survive the current political moment even with it’s passion for emotion, relativity, and humanism; and even with its indifference to reason, truth, and legacy.

Hopefully, pushing through to a better future won’t first require us to hit bottom by negating an election, dishonoring our Constitution, and violating basic American values.  Whether it does or not, though, America will eventually regain its footing as the greatest, freest, most principled nation on earth.  When it does, history will not remember well Adam Schiff or those other politicians and their brand of dishonesty and dishonor.

The Impeachment Follies Will Fail